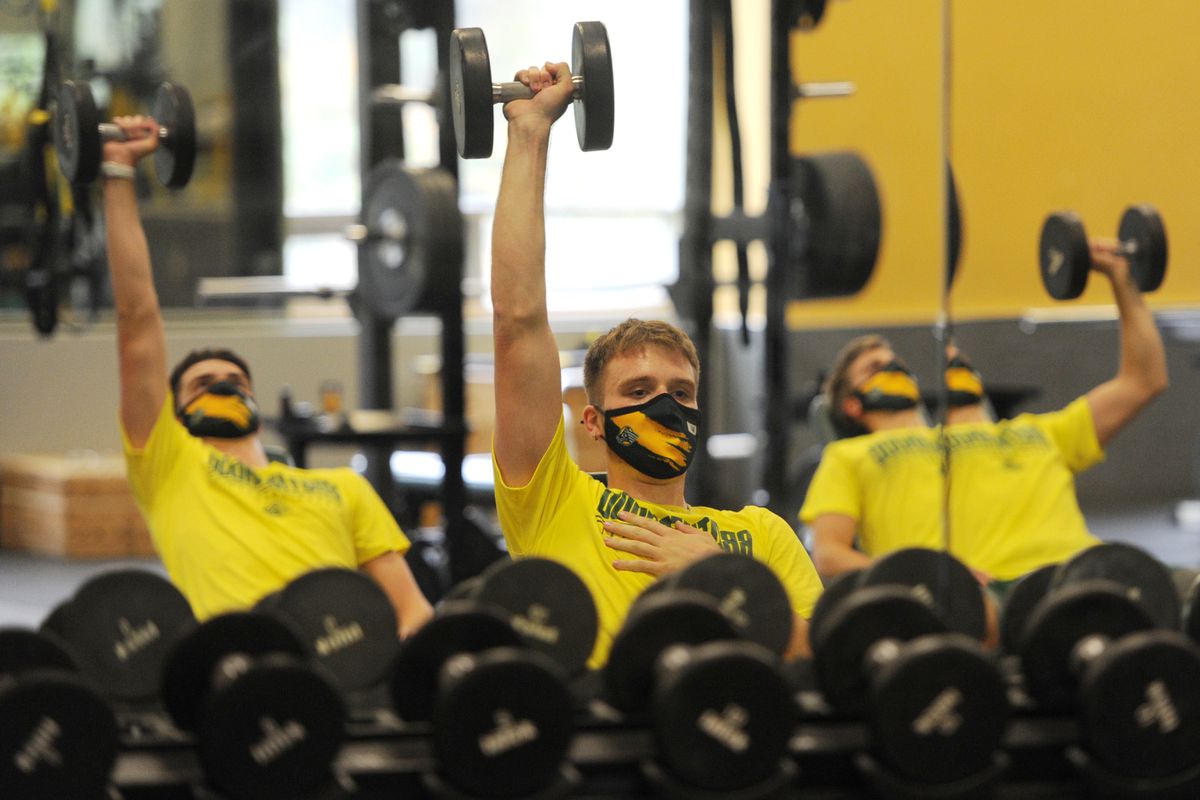 Cast out of their home arena for nearly six months, UAA athletes are returning to the Alaska Airlines Center in small groups for one-hour conditioning workouts in the arena’s weight room.

There’s still a chain-link fence around the arena, which became an alternate care site at the start of the COVID-19 pandemic in late March. No patients have ever been taken there but most of the building is off-limits, including the main gym, which is no longer filled with hospital cots but remains dark and free of activity.

Athletes from nearly all of UAA’s teams are working out in small groups with Ryan Walsh, the school’s strength and conditioning coach. They enter through a side entrance where a member of the training staff checks their temperatures next to a table with hand sanitizer.

“It’s definitely a little strange to have it look so different, but that’s kind of the theme this year, isn’t it?” said Georgia Burgess, a senior on the alpine ski team.

Burgess is one of six alpine skiers who are back in Anchorage. She returned to her home in Calgary in March and is glad to reunite with teammates and coaches.

“It brings this feeling of being back and training toward our goals together,” she said.

Walsh, a UAA track team alumnus, works with a different group of athletes every day from 8 a.m. to 6 p.m. No more than nine athletes plus Walsh are there at a time, and when possible athletes who share a household also share workout sessions.

Masks are mandatory and can be removed only to drink water, Walsh said. Spray bottles filled with a disinfectant and used on equipment whenever someone is finished using it.

Circuit training in the weight room started last week and will continue through the end of this week. Small groups will continue to meet in the third and fourth weeks, Walsh said, but they will meet in the main gym with a coach. Sprints and other cardio-related activities will be included.

“I can tell they’re pretty stoked to have structure again for that feel of normalcy,” Walsh said. “Athletes are used to a structured week.”

Walsh said many skiers and runners have spent the summer outdoors — Burgess said she and other skiers have been hiking the front range of the Chugach Mountains in recent weeks — but some athletes have gone through “de-training” in the months since UAA closed most of its facilities and went to online learning.

“Some have had access to a weight room, some have had nothing,” Walsh said. “... Part of my job as we resume is returning in a sensible manner, with no crazy increases in intensity.”

Though workouts have resumed, no one knows when the Seawolves will return to competition.

Most UAA teams compete in the Great Northwest Athletic Conference, which has suspended all sports until Nov. 30, which essentially means no volleyball or cross country in 2020-21 unless they are rescheduled for another time, possible the spring. The hockey team is a member of the Western Collegiate Hockey Association, which postponed the start of the season and has not yet announced when play will begin.

Burgess said she hopes there will be a ski season so she can compete in her final season as a Seawolf. Until a decision is made about the ski season and other winter sports, she’s taking things day by day and working toward attainable goals.

The return to the Alaska Airlines Center has been bittersweet, she said.

“It’s so exciting to be back in our facility, and we’ll take it in any capacity we get it,” she said. “But I’m sad because we have some new team members, and one of my best moments as a freshman was getting the tour of the Alaska Airlines Center and seeing our locker room and seeing my name on the nameplate and seeing the arena all lit up. It’s such a huge facility, and that was a standout experience for me.”