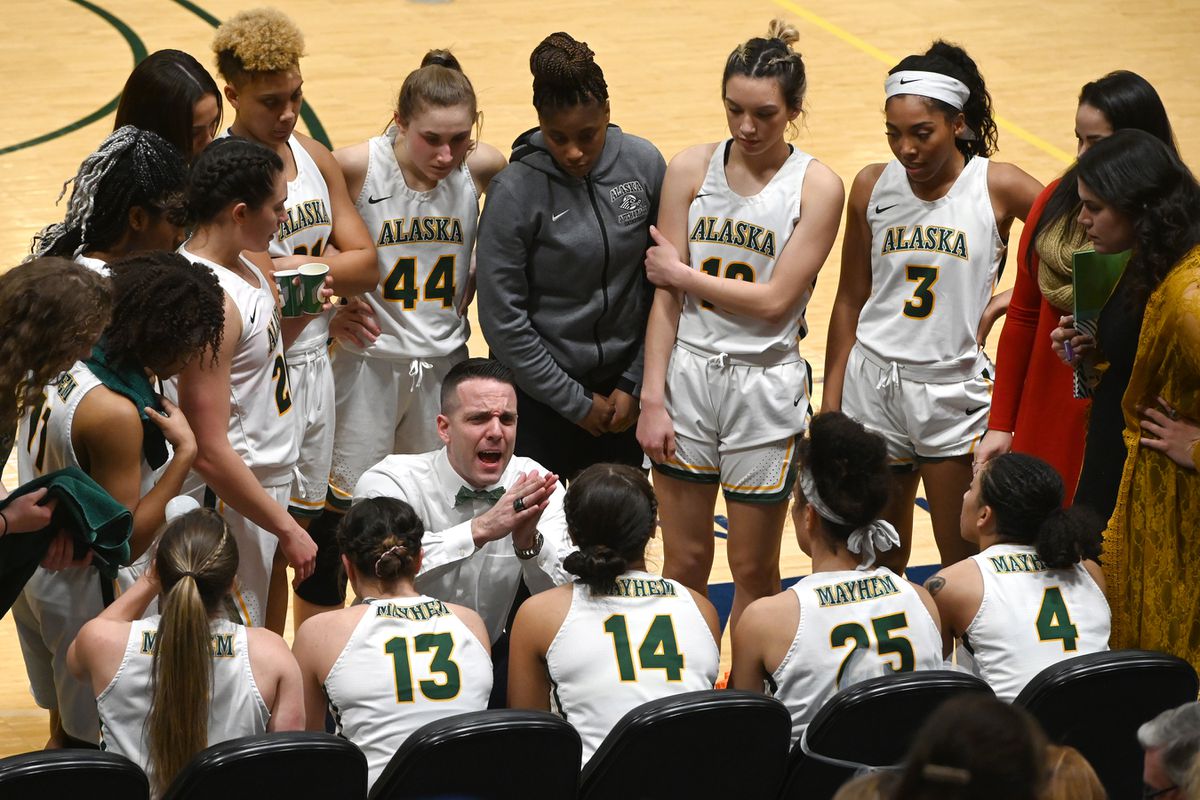 UAA coach Ryan McCarthy talks to his players during a 90-36 victory over UAF last February, one of the Seawolves' last games before their season was canceled because of COVID-19. (Bill Roth / ADN)

UAA coach Ryan McCarthy talks to his players during a 90-36 victory over UAF last February, one of the Seawolves' last games before their season was canceled because of COVID-19. (Bill Roth / ADN)

The UAA women’s basketball team is quarantined until next week after a player tested positive for COVID-19 last week when she and the rest of the team were tested as part of UAA’s back-to-practice protocol.

The player has not developed any symptoms and the rest of the team tested negative, athletic director Greg Myford said.

The coaching staff was not exposed to the player and is not quarantined.

The basketball team is at least the second college team in Alaska to be quarantined because of the pandemic. Last month six hockey players from UAF were isolated after testing positive and the rest of the team was quarantined after a number of them were exposed to the virus at an off-campus party.

UAA coach Ryan McCarthy said the basketball player who tested positive “was doing the right things. She was unlucky."

Everyone she was in contact with has been notified, he added.

Other UAA athletes began limited conditioning workouts last week at the Alaska Airline Center, which was converted to an alternate care site last April at the start of the pandemic. Testing for COVID-19, which has led to more than 200,000 deaths nationwide since last March, was part of the school’s protocol for the resumption of practice.

“Student-athletes were not permitted to begin activity on campus prior to having their test results,” Myford said by email.

The athletic department has tested 162 athletes, trainers and coaches, and all tests came back negative except for one, he said.

“Obviously, that can change if safeguards are ignored and we don’t all remain vigilant about protecting ourselves and each other, but I’m very pleased with how our student-athletes have taken the matter with the seriousness that it demands,” Myford said.

McCarthy said the two-week quarantine will put his players a week or two behind other UAA teams, which are expected to move from the weight room to the main gym next week.

“Everyone starts in the weight room before we can hit the floor,” he said by text. “They are all in good spirits and feeling well.”

He said the team meets virtually every day “to go over academics, leadership development, and goals so that they remain focused and get better each day.

“We are willing to do whatever the university deems safe to return,” McCarthy said. “I’m not sure if there will be a season or not so I’m more focused on keeping our standards high academically and when we are able to return, to do each stage (at the highest level) we can.”

The Seawolves are one of the best Division II women’s basketball teams in the nation. They were 31-2 last season when their season ended prematurely because of COVID-19 — the NCAA canceled the season the day before UAA was set to play a West Region playoff game in Hawaii.

Now the same virus is delaying the start of a new season.