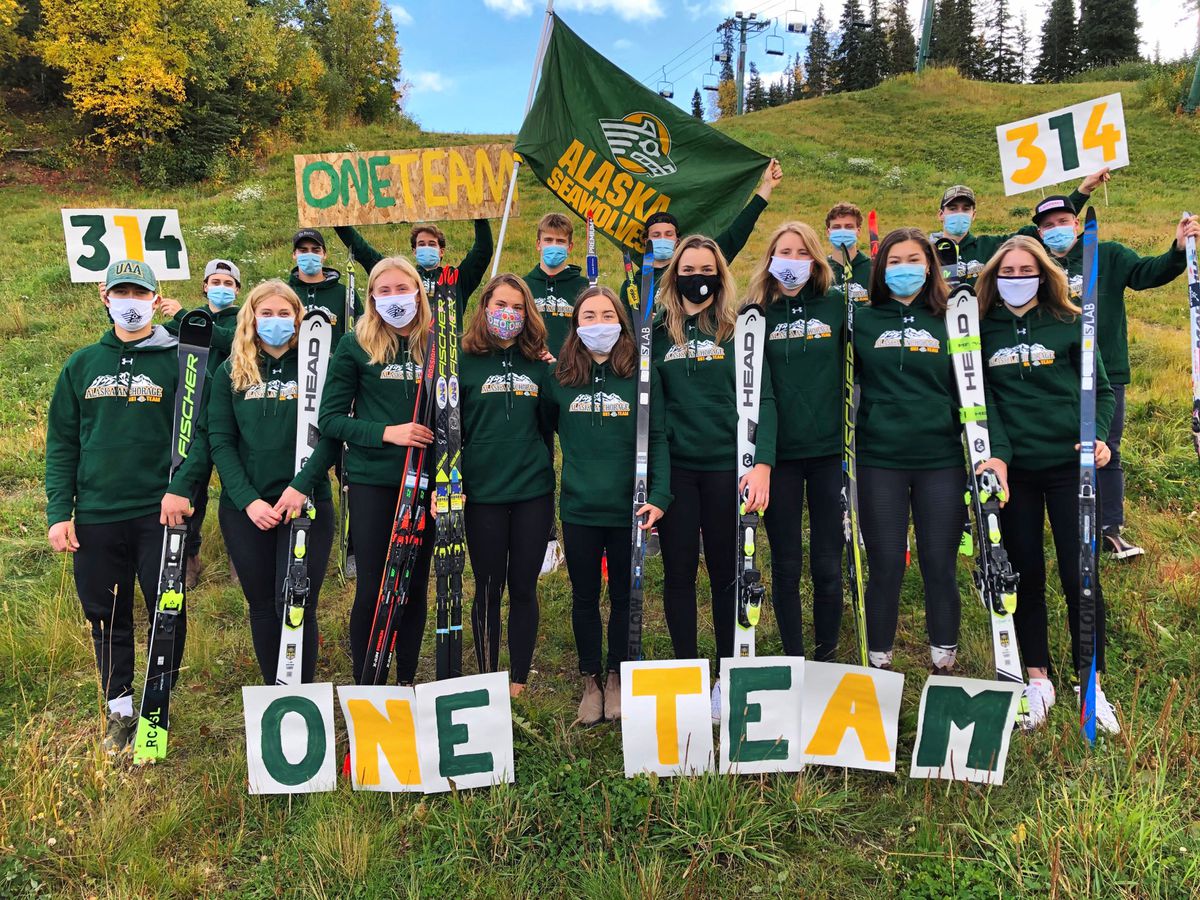 Members of the UAA ski team gather at Hilltop to demonstrate their solidarity and help kick off the 314 fundraising initiative. Each skier is holding one alpine ski and one nordic ski. (Photo by Anna Berecz)

Members of the UAA ski team gather at Hilltop to demonstrate their solidarity and help kick off the 314 fundraising initiative. Each skier is holding one alpine ski and one nordic ski. (Photo by Anna Berecz)

Two weeks ago, the UAA ski team was told it needed to raise more than half a million dollars if it wants to keep its alpine skiers on the slopes. At the time the task seemed daunting, if not inconceivable.

The Seawolves must raise $314,000 in cash plus $314,000 in pledges by February — enough to fund two seasons of alpine skiing — in order for the full team to survive beyond this winter, the University of Alaska Board of Regents decided during a Sept. 10 meeting.

“It seemed impossible when it happened,” head coach Sparky Anderson said Thursday. “Now I think to not meet the goal is going to be impossible. I’m confident we can get there.”

For that, Anderson can thank his wife and kid.

In the immediate aftermath of the Board of Regents decision, Anderson had a number of long conversations followed by sleepless nights. Then one of those conversations — with his wife Diana Stram, at their Girdwood home — sparked the idea for a fundraising campaign.

“She said that and it just clicked. It felt like this is something I can wrap my head around and it’s attainable.”

Anderson reached out to former UAA skier Natalie Osborne, who builds websites for a living, and she agreed to create a website for the 314 campaign.

"She makes jewelry and other stuff, and she was the first one to give us a thousand bucks out of her own account. She said, ‘Here you go Dad, good luck,’ " Anderson said.

The 314 website is filled with reasons to save the alpine squad:

• The UAA ski team routinely posts one of the athletic department’s highest grade-point averages. The women had a 3.82 GPA last school year and the men weren’t far behind, Anderson said.

• The team adds to the university’s enrollment and revenue. About half of the 24 skiers on the team pay full or partial tuition, Anderson said.

• The team is the oldest at UAA, dating back to 1977. The hockey team — which is also being targeted for elimination and must raise $3 million by February to stay alive — began in 1979.

• The team contributes some 250 hours of community service each year.

The key word in all of those things, Anderson said, is “team.”

The Board of Regents voted to keep nordic skiing but will only keep alpine skiing if the fundraising goal is met. But as far as Anderson and the NCAA see it, nordic and alpine skiers are all part of a single team.

“Skiing is one sport. It’s four events. I feel strongly that we’re one team," Anderson said. "Skiers are skiers — it doesn’t matter what the width of ski you’re skiing on. We’re all skiers.”

Without UAA alpine skiers, he noted, FIS races will all but disappear at Alyeska. FIS races are sanctioned by the sport’s international governing body and require a certain level of competition. They are the path to regional, national and international opportunities, and without high-level UAA skiers making FIS races possible at Alyeska, young skiers would have to travel to the Lower 48 for them, Anderson said.

Another thing Alaska will lose without alpine skiers: The chance to host NCAA national or regional championships, something Anchorage has done several times.

Anderson said he hopes the 314 Club will meet its goal by the end of the year, but donations can be made until the end of January.