Competition is uncertain for Seawolves, and so are home games in front of fans 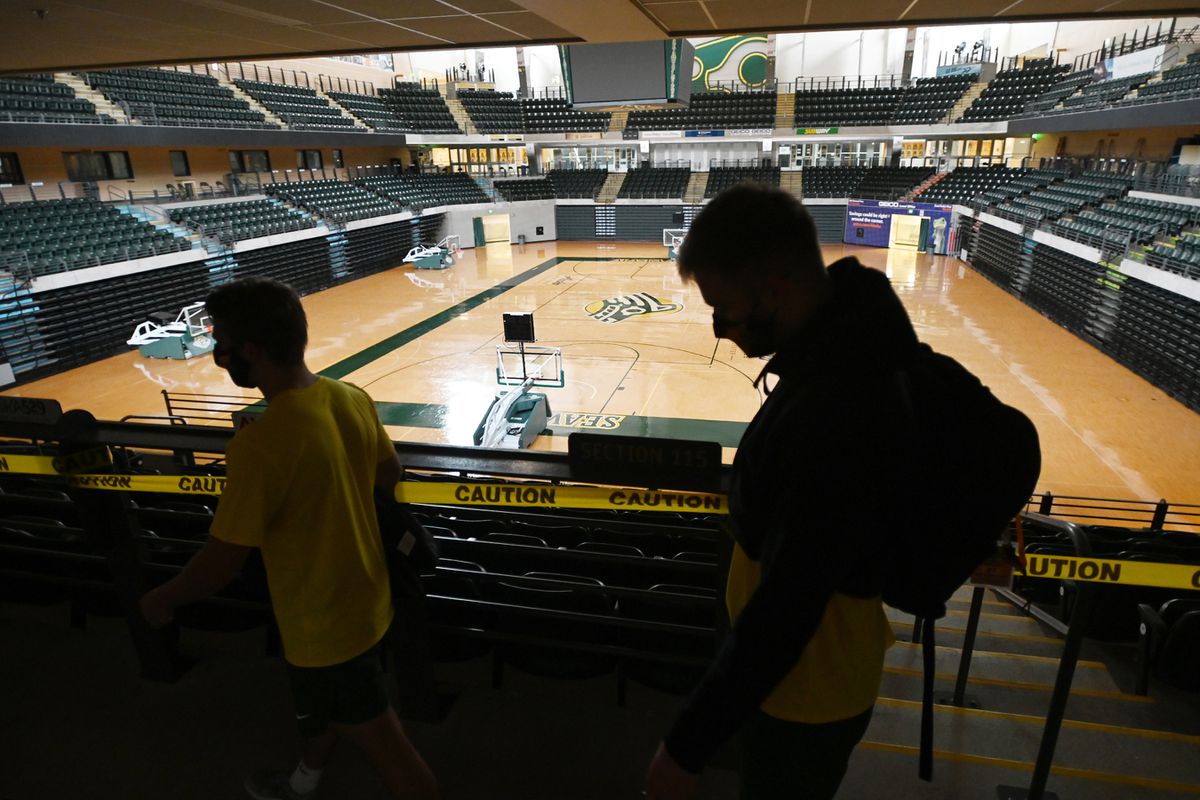 A pair of UAA basketball players are silhouetted as they leave the Alaska Airlines Center last month. The state of Alaska is using the facility as a COVID-19 alternate care site through March 31, 2021. (Bill Roth / ADN archive)

A pair of UAA basketball players are silhouetted as they leave the Alaska Airlines Center last month. The state of Alaska is using the facility as a COVID-19 alternate care site through March 31, 2021. (Bill Roth / ADN archive)

If the Seawolves play games this season — and that’s a big if — spectators won’t be allowed at home games unless Anchorage’s COVID-19 conditions “improve significantly,” the University of Alaska Anchorage said Friday.

Two days after the school announced its 2020-21 hockey schedule, athletic director Greg Myford addressed a number of questions regarding UAA athletics as the city’s COVID-19 case count grows by triple figures every day.

The takeaway: there’s been no decision whether hockey or any other UAA teams will compete this school year.

“The real challenge will be in concluding that UAA can play ... given the many significant precautions necessary in today’s COVID environment,” Myford said in a written response to questions from the Daily News. “We have not yet made this determination for hockey or any of our sports yet.”

If the Seawolves do play, home games would probably be held without fans — and basketball and volleyball games would move to the old Seawolf Sports Center if the Alaska Airlines Center is needed as an alternate care site.

“If UAA gets to the point that our teams are able to compete this year, it is unlikely that we will have spectators at home events,” Myford said.

“We don’t want to speak in terms of absolutes at this point, but given our current circumstances and the challenges posed by the pandemic, having spectators attend our indoor events would seem irresponsible. However, if conditions improve significantly and we are able to welcome spectators, we will adjust to current mandates and guidance.”

Games would be livestreamed if spectators aren’t allowed, he added.

On Wednesday, UAA released its 2020-21 hockey schedule — 22 games, about a dozen fewer than usual. On paper, the Seawolves are set to begin play with a Dec. 4-5 series against the University of Alaska Fairbanks.

Whether that translates to teams on the ice remains to be seen. Strict mitigation plans would be in place if teams are allowed to play, Myford said, with details to be worked out based on COVID-19 conditions.

The UAA hockey team recently began practicing at the Seawolf Sports Center, where the Seawolves play their home games. Athletes from all teams have been using the weight room and some are using the main gym at the Alaska Airlines Center, which was converted into an alternate care site in late March as the pandemic began its grip.

The six-month contract between the Alaska Airlines Center and the State of Alaska was recently renewed for another six months, until March 31, 2021. It can be renewed month-to-month after that, Myford said.

So far the building has not been needed as a care site, but access to it by UAA’s athletic department remains limited. If at some point it is needed, athletics would no longer be allowed in the building and would move to the Seawolf Sports Center, the university said.