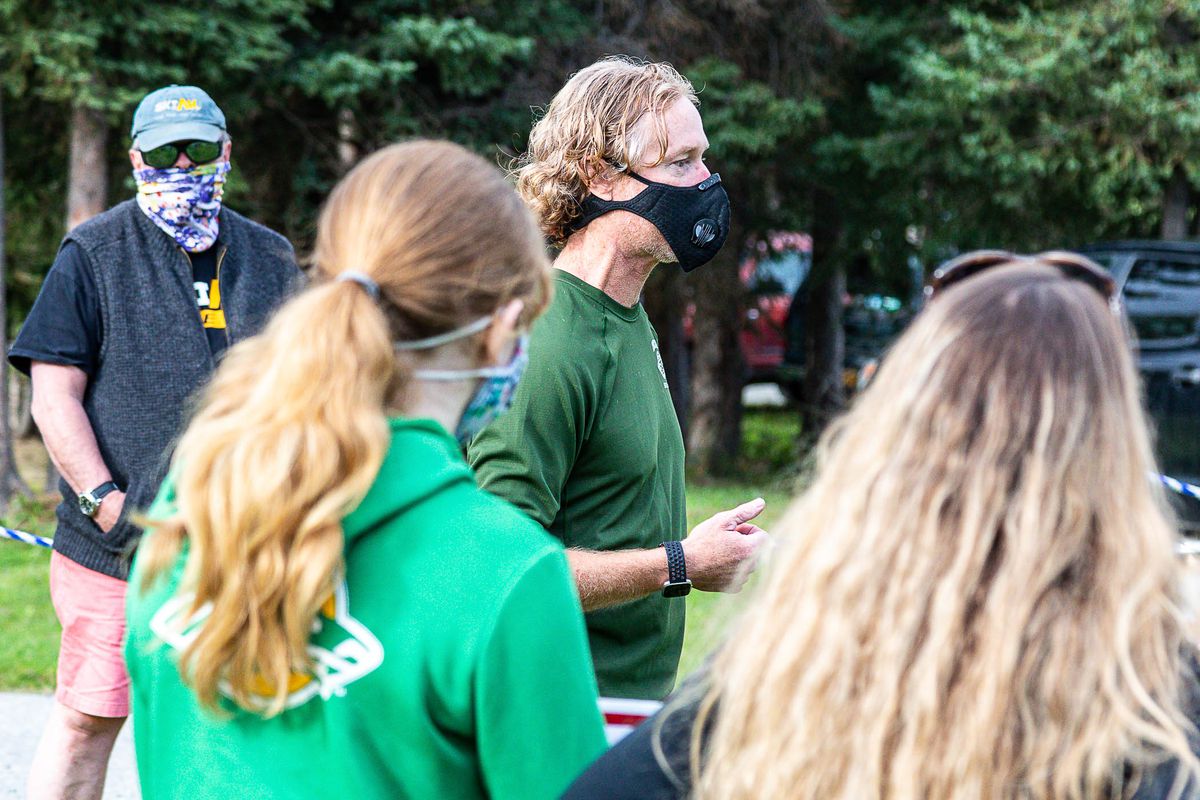 Ski coach Sparky Anderson speaks at a rally for the team in August, days after the team was targeted for elimination. (Courtesy Bob Eastaugh)

Ski coach Sparky Anderson speaks at a rally for the team in August, days after the team was targeted for elimination. (Courtesy Bob Eastaugh)

The University of Alaska Board of Regents on Friday voted to reinstate the UAA alpine ski team, which regents had previously eliminated along with hockey and gymnastics due to budget cuts.

Skiing survived by meeting terms set by regents when they voted to kill the three sports at a Sept. 10 meeting. Reinstatement was possible, the regents said, for any team capable of raising two years’ of operating expenses by their February board meeting.

Reinstatement of the alpine team was part of the agenda for Monday’s Board of Regents meeting, where regents voted 8-0 to keep the Seawolves on the slopes.

“It’s amazing,” Anderson said. “I’m speechless right now. It’s been so much pressure and work and worry and everything, and just knowing that this is now in the rearview mirror, it’s nice to be able to think about moving forward.”

The regents met the day after Anderson and the alpine team returned from season-opening races in Colorado, where the Seawolves had commendable results.

“Literally everybody on the team has been glued to the computer waiting for this agenda item to appear,” Anderson said. “When we got the word, the group chats exploded.”

UAA’s ski, hockey and gymnastics teams have been targeted for elimination since Aug. 19, when athletic director Greg Myford and former chancellor Cathy Sandeen proposed cutting them in order to save $2.5 million a year from the athletic budget, which was $9.3 million in 2019-20, according to the university.

The entire ski team — alpine and nordic — was originally targeted, but at the Sept. 10 regents meeting, the nordic team, which costs about $262,000 a year, was spared.

Anderson led the charge to save the alpine team, which over the years has produced three NCAA national champions, 43 NCAA All-Americans and four Olympians — one apiece for the countries of Canada, Hungary, Chile and Latvia. He said his fight to save the Seawolves began Aug. 19, the day he first learned the team’s future was in jeopardy.

“I think about it and how daunting this was and how I felt on Aug. 19 when I was camping with my daughter and heard about it, and to be here now with a future that involves doing what I love — I’m ecstatic,” he said.

Anderson said he was camping on a beach in Ninilchik with 14-year-old daughter Kea when he learned UAA had proposed eliminating the team.

“As soon as it went public I got a million texts,” he said. “The ones I felt the worst about were from my staff. All I texted back was Bluto’s big speech.”

Properly motivated by John Belushi’s “Animal House” pep talk (rated R for language), Anderson and the Seawolves embarked on a survival mission that attracted donations and pledges from about 500 people, many in Alaska but some from beyond, people who wanted to preserve an NCAA alpine program.

“The commitment and effort of our UAA Ski program and the ski community — here in Anchorage as well as across the country — was rewarded today, and we all benefit,” Myford said in a written statement.

This isn’t the first time UAA administrators have deemed skiing expendable during a budget crisis. In 2016, former UAA president Jim Johnson proposed cutting skiing at UAA and UAF, only to reverse course about two weeks later after pushback from the public.

Anderson said he is weary from the repeated threats to his sport and hopes the university and athletic department in the future will manage budget cuts without sacrificing teams.

“As a department we need to take a look at how to raise funds to retain our excellence, so it’s not put on the backs of one sport,” he said. “I’m sure I’ll be involved as all of the head coaches will in the conversation. I do feel like skiing has a prominent role in the department, now maybe more than ever, and I want to see the sport be around for decades.”