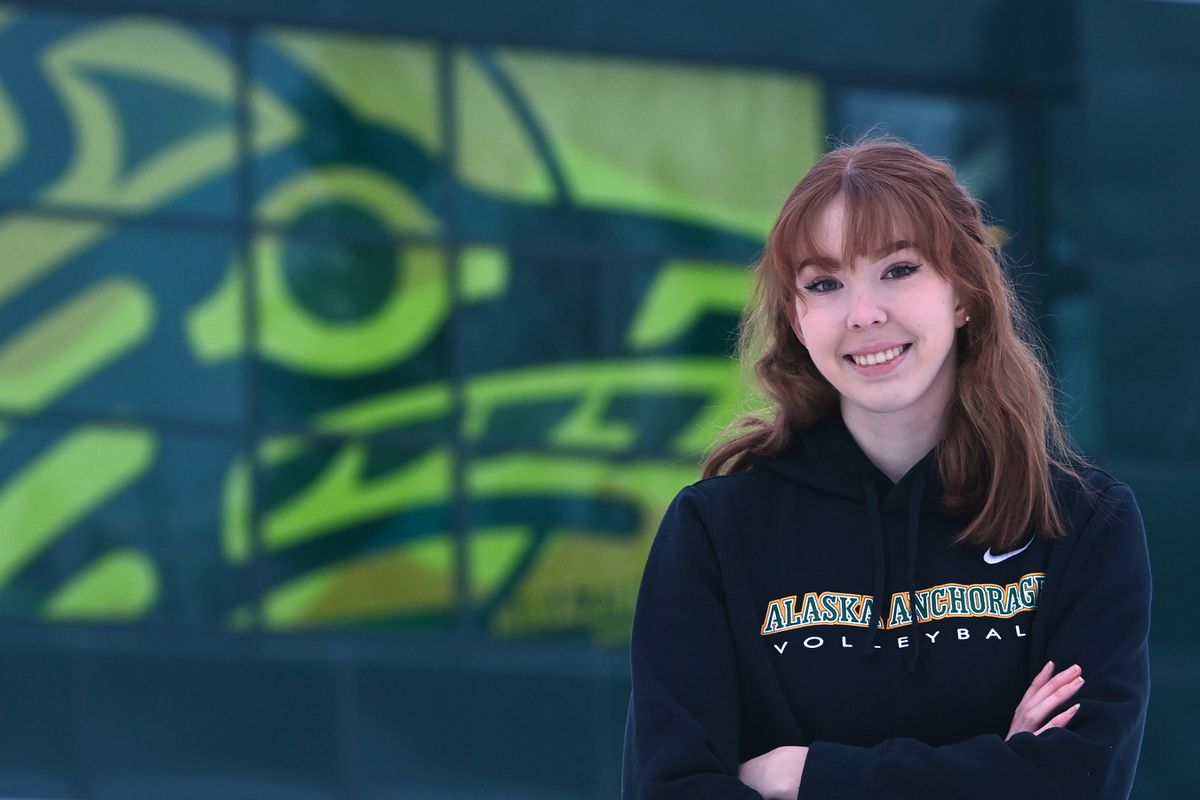 UAA volleyball player Sara Moore graduated early from Chugiak High School, at semester break, so she could enroll at UAA and join the team this spring. Photographed on Tuesday, Feb. 2, 2021. (Bill Roth / ADN)

UAA volleyball player Sara Moore graduated early from Chugiak High School, at semester break, so she could enroll at UAA and join the team this spring. Photographed on Tuesday, Feb. 2, 2021. (Bill Roth / ADN)

Sara Moore was Chugiak High School’s homecoming queen in the fall, so really, what other senior-year experience does a girl need?

Moore, a 6-foot middle blocker for the Mustangs volleyball team, recently decided to graduate early and get a jump-start on her college volleyball career by enrolling at UAA this semester and joining the Seawolves for whatever kind of abbreviated season they have this spring.

She plans to walk with Chugiak’s Class of 2021 at graduation, but she’s already embracing the life of a college student — she’s living on the UAA campus, taking college classes and practicing daily with her new team.

“Definitely the pandemic was a main factor as to why I was able to graduate early and why I chose to,” said Moore, 18. “I was worried about losing my senior-year high school experience, which is so important to so many people, but I’m so excited to have this opportunity to move on.

“I’ll still have fun experiences, they just won’t be in high school.”

Moore said she planned to stay in high school and was putting off any decisions about college until about a couple of months ago, when she heard from UAA coach Chris Green. He’s in need of middle blockers, and he believes Moore will get stronger and better with time.

“She has a lot of growing to do, but the good news is she jumps well and if we can get her stronger, she has the potential to be a factor,” Green said.

Moore was thrilled by the interest. She had been thinking about going to Seattle Pacific or taking a gap year after high school, but neither scenario included NCAA volleyball. Given the opportunity to play at the next level, she grabbed it.

“It was definitely more difficult than I would have anticipated but I was able to stay organized and on top of things,” she said. “It definitely meant I was not able to have a social life.”

Nothing Moore does this school year at UAA will count against her four years of eligibility, even if the Seawolves — whose fall season was canceled — are able to put together a spring season and Moore plays in any matches. Because of the pandemic, the NCAA isn’t counting this school year against an athlete’s eligibility.

Once at UAA, Moore was welcomed by the her new teammates and challenged by the intensity of college volleyball. “It’s faster and more high-speed than what i’m used to,” she said.

Moore played club volleyball for Inspire and was a member of Chugiak’s varsity team for three seasons, the last two season as a starter.

The oldest of Matthew and Cary Moore’s five children, Moore said her parents supported her decision to graduate early. Her mom is a UAA professor, which means Moore gets a break on tuition.

Green thinks Moore is the first athlete to graduate early from high school and join the Seawolves in the spring semester.

“We have not had anyone in UAA history as far as I know, but it’s happening a lot, I can tell you that,” he said. “Especially in Division I, not only in volleyball but more so in football. If they’re in a fall sport, they graduate early so they train with their team in the spring and it gives them that head-start.”

Green said Moore is likely to redshirt next season, and Moore is fine with that.

“I’m just ready to learn all I can and get conditioned for when I do play in games,” she said.