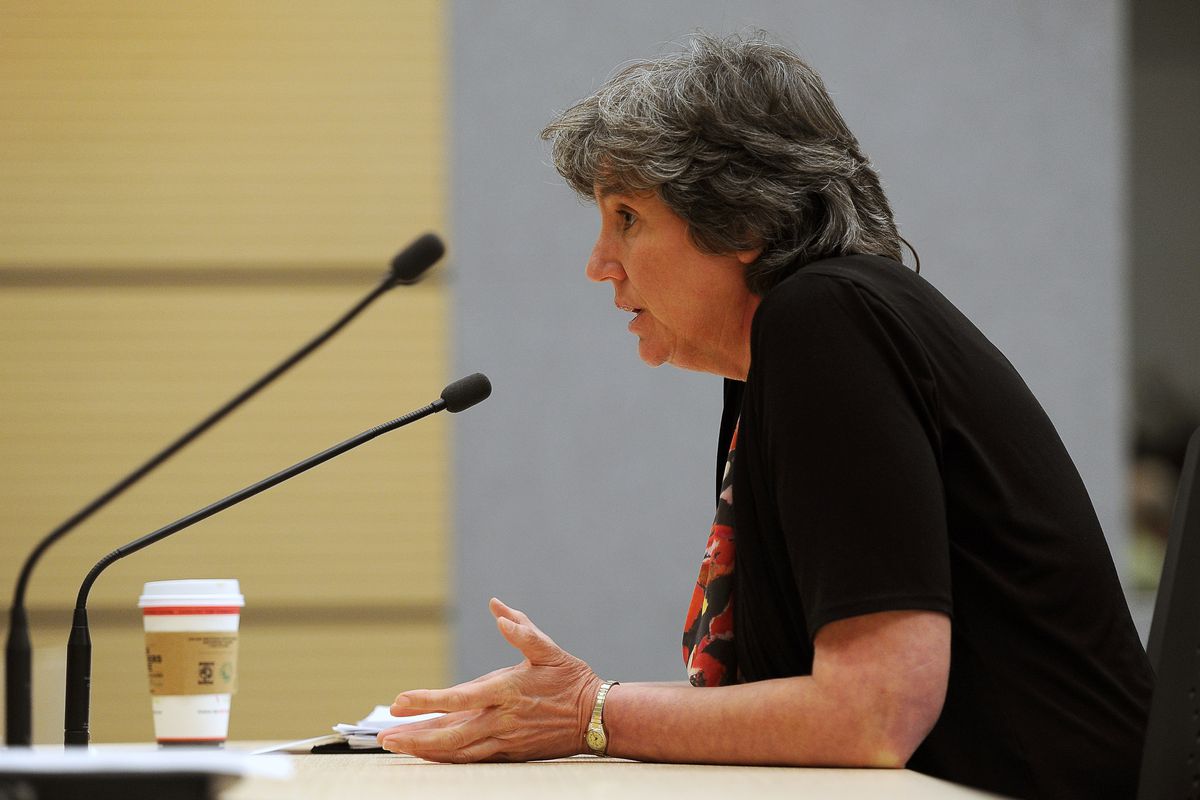 With the fate of UAA’s hockey and gymnastics programs about to be decided by the University of Alaska’s Board of Regents, university interim president Pat Pitney on Wednesday spoke about school pride.

It’s what binds a university to a city or a state, she said, and it can come in many forms, including success in classrooms, breakthroughs in laboratories and performances in sports arenas.

Pitney is backing a proposal UAA is presenting to regents that would extend the fundraising deadlines for the hockey and gymnastics programs. The regents are meeting Thursday and Friday, and UAA athletics is expected to be addressed Thursday.

Regents eliminated hockey, gymnastics and alpine skiing in September but gave each a shot at reinstatement if they could raise two years’ worth of operating expenses by this week.

Skiing raised the $628,000 it needed for reinstatement, but neither hockey nor gymnastics has reached its goal. Hockey is nearly two-thirds of the way to the $3 million it needs, and gymnastics is not quite halfway to the $880,000 it needs.

The numbers that get Pitney’s attention are these: More than a thousand people have contributed cash or pledges to the hockey fundraising campaign and about 500 have done the same for gymnastics. Many more participated in silent auctions, split-the-pot raffles and other money-raising events.

“We’re not quite there and we’re going to ask for more time, but the number of people who have been participating and have put money into this — it’s so much broader support than what we have seen in the fan base previously,” Pitney said.

“I’m so encouraged by the momentum. Skiing was a slam dunk. People said, ‘We’re Anchorage and we’re having skiing, by God.’ The momentum we’re seeing in hockey and gymnastics is awesome. It is a piece of the community, and the community understands the new reality.”

Pitney, 55, became the university’s interim president in August. She spent 23 years with the University of Alaska, including time as a vice chancellor at UAF, before becoming the budget director for former Gov. Bill Walker in 2014. She was working as the director of the Legislative Finance Division last year when regents picked her to be the university’s interim president.

At the time of her selection, one of the regents said Pitney would bring a fresh perspective to addressing the university’s significant budget crisis.

She also brings the perspective of an elite athlete. Pitney won an Olympic gold medal in air rifle at the 1984 Summer Olympics and was an eight-time NCAA All-America shooter at Murray State in Kentucky, home of the Pat Spurgin Rifle Range named in her honor (Spurgin is her maiden name).

The habits and discipline of a world-class athlete are something Pitney brings to work every day.

“It’s the goal-setting and being really clear on what’s the next most important thing to reach the goal, and then the ability to remain focused on it,” she said. “The vast majority of that comes from the training I had. Searching for the small things that make the difference and focusing on those. In athletics, you have to do the little things right or nothing matters. If you don’t have your foundation set, it’s hard to build to that next level.”

As a competitive shooter, Pitney’s goal may have been Olympic gold, but the way to get there was doing little things, like having the discipline to make sure a particular muscle is relaxed before squeezing the trigger.

As a university president, one of Pitney’s goals is to combat budget cuts with increased enrollment, and one of the of the small ways to get there is reaching people who aren’t thinking about going to college and telling them how to apply for federal financial aid.

“It’s one effort in what’s going to have to be 15 things to really make a difference,” she said. “What is that one small thing that is going to lead to this bigger success? And how do you then pick the next small thing?”

Saving UAA hockey and gymnastics is another goal and reaching it could lead to an even bigger success, which brings Pitney back to school pride.

“Athletics provides a level of identification for the campus, a point of pride you can rally around,” she said. “One of the university’s biggest components of success is the degree to which our communities embrace us.”

Community support is vital at this point, she said. The University of Alaska has absorbed cuts in state funding in seven of the last eight years and has seen the amount of state support slashed by one-third.

The fundraising efforts made in recent months by the skiing, hockey and gymnastics teams and their boosters will need to continue more broadly going forward, Pitney said, not just by athletic teams but by various activities.

“We’re looking for stability … and that means a lot of our activities that have been subsidized have to find a more sustainable funding path, and in order to maintain that external funding path, there’s an expectation of success and partnership. So that’s what I’m looking for,” Pitney said. “It’s an upward spiral. The show of support feeds the success, and that success draws more support, and it’s all just elevated.”