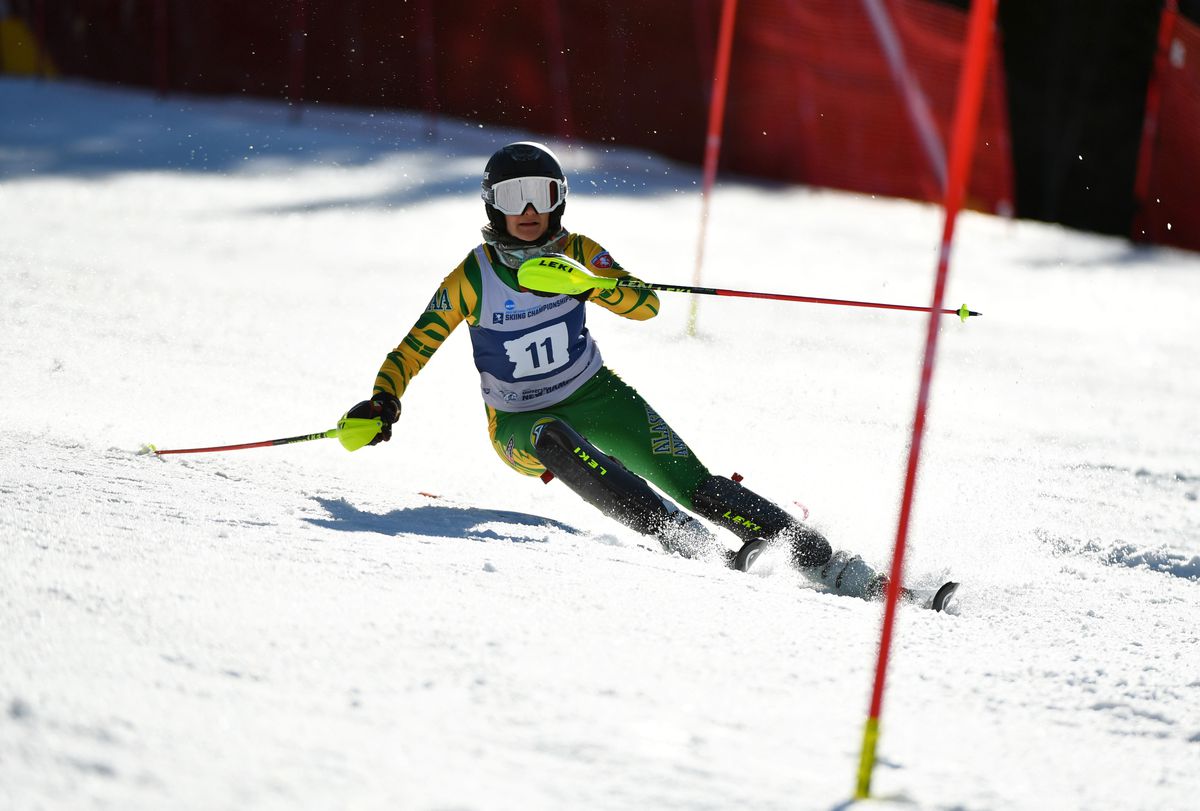 UAA's Rebecca Fiegl approaches a gate en route to her sixth-place finish in the women's slalom race Friday at the NCAA Championships in New Hampshire. (Photo by Brett Wilhelm/NCAA Photos via Getty Images)

UAA's Rebecca Fiegl approaches a gate en route to her sixth-place finish in the women's slalom race Friday at the NCAA Championships in New Hampshire. (Photo by Brett Wilhelm/NCAA Photos via Getty Images)

The day delivered a 30-degree temperature range, which seemed about right for a UAA ski team that absorbed a bit of everything Friday in the slalom races at the NCAA Championships in Franconia, New Hampshire.

Senior Rebecca Fiegl delivered an All-America performance by placing sixth in the women’s race, freshman Moro Bamber stumbled before he soared in the men’s race, and senior Li Djurestaal had a run-in with the media.

Fiegl, of Langenfeld, Austria, is UAA’s fifth All-American of the championships -- and its only top-10 finisher in alpine competition. She executed two consistent runs at Cannon Mountain Ski Resort, where temperatures swung from the 20s to the 60s.

Fiegl posted the 10th-fastest time in each run to earn All-America honors for the second time in her career.

The first time was as a freshman at New Mexico, when she placed eighth in the slalom. Not long after her sophomore season ended, New Mexico axed its ski team and Fiegl transferred to a Seawolves team that recently escaped the chopping block. She’s a three-time NCAA Academic All-American.

Georgia Burgess, a senior from Calgary, capped her four-year career with Seawolves by placing 19th. In Wednesday’s giant slalom, she skied to a career-best 11th place finish, missing out on making the All-America team by .56 of a second.

UAA coach Sparky Anderson said Burgess has dealt with a hip problems and a bad back for two years. “The poor kid can barely walk but gutted out two very solid runs to help us score some badly needed points,” he said.

Djurestaal, a four-year team member from Sundbyberg, Sweden, was poised to make a run at the top 10 in the second run of the women’s race until a camera lens got in her way.

Djurestaal had to ski off course when the lens of a cameraman livestreaming the race got loose and rolled in front of her. After finishing 12th in the first run, she dropped all the way to 26th after her second run.

“She had a fantastic first run and was in a position to move into the top 10,” Anderson said. “A lens from the livestream video cameraman came loose and slid in front of her in the top section. She was forced off track and didn’t think to stop to ask for a provisional re-run.”

The men had a disappointing day. Michael Soetaert had two solid runs to place 17th, but Didrik Nilsen and Bamber both struggled in the first run and went on to finish 27th and 28th, respectively. It was the final race for Soetaert, a senior from Edmonton.

Nilsen, a junior from Oslo, Norway, and Bamber, a freshman from Toronto, both missed gates on their first runs. They had to hike back up the course in order to finish the run and get a chance to improve in the second run.

Bamber took full advantage of his second chance by turning in the fifth-fastest time of the run.

A long hike left him with a time of 1 minutes, 47.19 seconds in the first run -- for context, consider that champion Mathias Tefre of Vermont had a two-run total time of 1:29.09. He clocked a blistering 43.97 seconds on his second run, a faster time than either of Tefre’s run times.

“He’s young and this is great experience for him,” Anderson said.

The championships wrap up Saturday with a cross-country race in Jackson. The Seawolves rank sixth in the field of 17 teams.