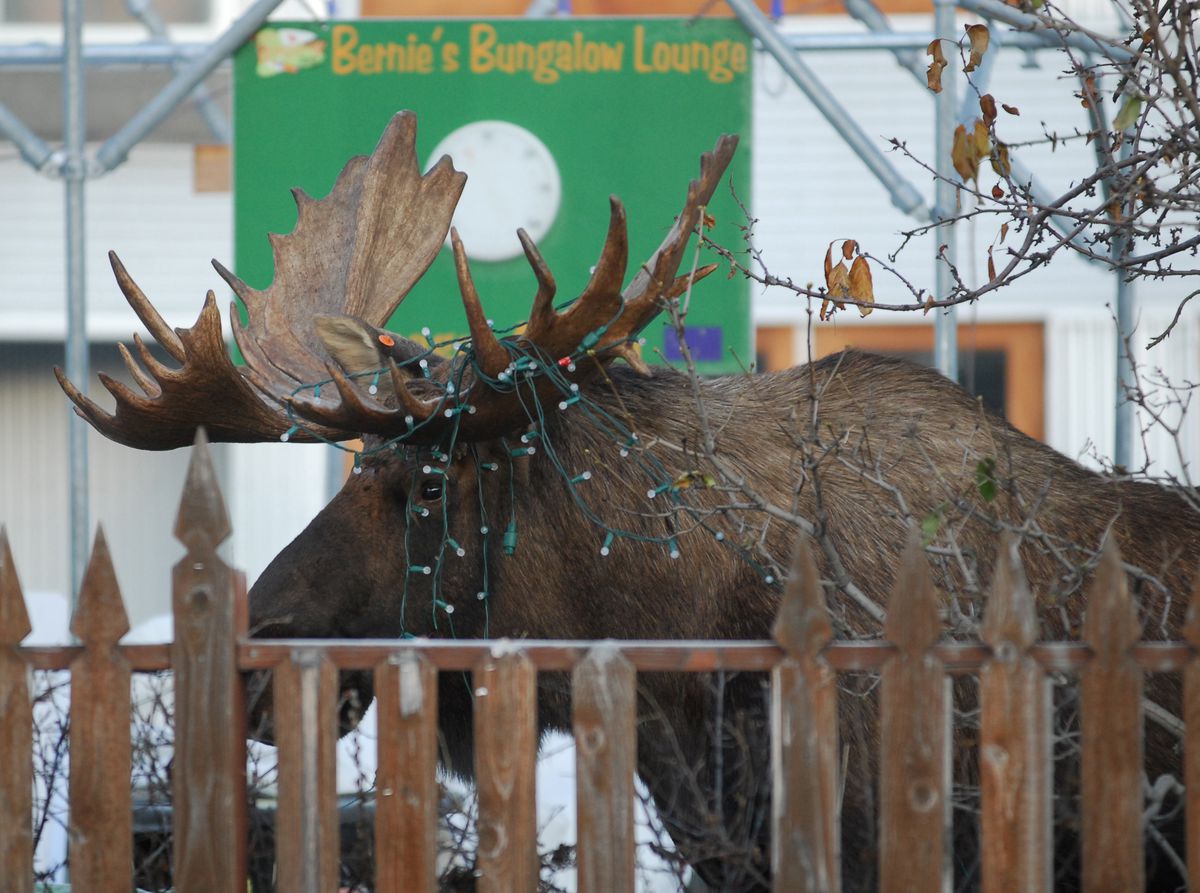 Every autumn in recent years our boreal neighbors in Sweden and Norway have regaled the rest of the world with tales of drunken moose. In most of the stories, the moose have gotten smashed eating fermented apples, the active ingredient in applejack.

Recently, near Stockholm, a "mob of boozed-up moose" threatened a homeowner, daring him to step into his own garden. The online magazine Slate called the news brief issued by Radio Sweden "the best thing on the Internet today."

Sweden and Norway have lots of moose and loads of apple trees. Alaska has fewer moose and a paucity of fruit trees, but where the two entities overlap -- in Anchorage, for example -- reports of drunken moose also abound. Alaska's best-known public inebriate may have been Buzzwinkle.

Making a spectacle of himself

Buzzwinkle's name was coined by Anchorage Daily News columnist Julia O'Malley in November 2007 after a moose downed a few too many fermented crabapple cocktails in the courtyard of Bernie's Bungalow Lounge, across the street from the Nordstrom store in downtown Anchorage. When O'Malley and I arrived, the massive bull was standing rigid, knees locked, with his wide-set eyes fixed in an inscrutable expression. A long strand of small white lights tangled in his antlers attested to some careless twig noshing in Town Square earlier in the day. The most obvious sign of life was the cloud of vapor venting from his nostrils with every deep exhalation. He was blotto, and he knew it. Too large to fit in a taxi, we left him to sleep it off in the fenced courtyard. After he revived, Anchorage Daily News photographer Erik Hill captured Buzzwinkle's unapologetic, nonchalant departure -- party lights still firmly affixed.

Although nameless before that incident, Buzzwinkle had been a well-known character in downtown Anchorage for years. He was often seen strolling slowly along urban sidewalks or crossing streets surrounded by what in Alaska passes for skyscrapers. Buzzwinkle was street smart. When I worked as an Alaska Department of Fish and Game biologist, I once watched him wait patiently for a red light to stop traffic on West Ninth Avenue before confidently stepping onto the crosswalk and ambling into the Delaney Park Strip. He specialized in foraging on ornamental shrubs and the vestiges of birch and other native trees that remain in the city's center. Undisturbed moose are notoriously phlegmatic. Buzzwinkle was unperturbed by people and traffic. He was large enough to command respect from awestruck commuters and shoppers. It was seldom necessary for him to throw his weight around.

In his prime Buzzwinkle sported a rack more than 60 inches wide and stood over six feet tall. Because Anchorage residents often enliven Alaska's dark nights by stringing lights on shrubs, and shrubs attract moose, bulls frequently wrap strands of the lights around their antlers. Buzzwinkle was no exception. In fact, his massive antlers accidently disassembled more than their share of holiday lights. During his last winter, Buzzwinkle could be identified by a "drop tine" -- a broken but healed portion of his growing antlers while they were in velvet -- near the end of his left antler. On closer inspection he had another identification mark, a small orange tag in his right ear.

Recollections of a party animal

The tag meant I had previously handled Buzzwinkle, but I didn't know where or when until I returned to my office at Fish and Game and looked up the tag number. I had snapped the tag in his ear three years earlier. Responding to a report of a moose entangled in a tree swing in a Turnagain neighborhood, Jessy Coltrane and I had found the bull lunging on a short tether between two houses. A colorful plastic seat dangling from a low limb was banging against the side of his head. He was a very agitated moose. We darted him, untangled the swing and rope, tagged him to indicate he had been drugged, and administered an antidote to get him back on his feet.

Recalling that incident, I remembered another encounter with the future Buzzwinkle. Several years earlier, a caller from the same neighborhood reported a large bull moose dragging several long strands of white lights. When I found the bull he was standing under several crabapple trees on a carpet of fallen, fermenting fruit.

Like a motorist who had just blown twice the legal limit during a traffic stop, the bull was putting on a good approximation of sobriety but stumbled whenever he stepped on a string of lights. He was drunk but not disorderly. In my experience, inebriated moose are introspective and slow to react. This one, big as he was, didn't look very dangerous. I had learned that a moose could break the thin wires when they snagged onto something solid. Rather than dart the bull, risking injury or adverse side effects, I decided to grab the end of the strings of lights and wrap them around the trunk of a crabapple tree. My first attempt was partially successful. As the bull slowly leaned away from the tree, the wires parted about 15 feet from its head. I gathered up the lights for another try. This time about eight feet remained. He was close enough to kick me, so I let him stagger off. The bull was almost certainly Buzzwinkle.

By midwinter early in 2008, Buzzwinkle was suffering from a large wound on a rear leg. Winter is a bad time for moose to heal; nutritious food is in short supply and every day is an existential struggle. Buzzwinkle gimped around the downtown area for several months, slowly working his way into midtown. Despite his debilitating wound, Buzzwinkle somehow was able to flop over several low fences. The wound slowly closed over.

The last time I saw Buzzwinkle alive was in early April 2008. Snow was disappearing fast, but his ribs and hipbones pressed angular ridges into his skin, mute testimony to a rough winter. He had found a warm spot to hunker down in a vacant lot on the sunny side of a wooden fence where the snow that had bedeviled him all winter long had melted away. However, he had subsequently rolled on his side and couldn't stand up. His eyes were closed, but his nostrils' rhythmic dilations showed he was still hanging on.

T. S. Eliot could have been thinking of moose when he proclaimed April the cruelest month. With its reserves depleted, the larder empty, and nothing green in sight, it's not uncommon for a moose to succumb during the slow transition from winter to spring. I couldn't leave Buzzwinkle helpless, feebly tracing arcs in the dirt with his hooves, to be worried by dogs or to lose his eyes to a raven. I shot him between the eyes. I don't believe he saw me or felt the impact of the 12-gauge shotgun slug. After euthanizing the bull, I patted his neck and ran my index finger over his molars, worn to the gums. Buzzwinkle was a very old moose, the oldest bull I'd ever seen.

Naming animals anthropomorphizes them. But treating animals as if they were people isn't always a bad idea. Smokey Bear undoubtedly prevented many wildfires -- until scientists figured out that wildfires were often beneficial. We can't blame Smokey for that ecological gaffe. He wasn't the brains behind the operation; he was the spokesperson. Or, more accurately, the spokesbear.

I met Buzzwinkle on several happier occasions after his spree at Bernie's Bungalow Lounge. When Discovery Channel's "MythBusters" produced an Alaska special, they wanted to film a moose walking in downtown traffic. Buzzwinkle obliged. He had died by the time the show aired in April 2008 so the producers dedicated the show to the archetypal urban moose. About the same time, Alaska magazine published a photo of Buzzwinkle wrapped in his customary mantle of tiny lights. By the time he died, Buzzwinkle had become Anchorage's unofficial antlered ambassador.

It'll soon be six years since Buzzwinkle went on his most memorable bender. Recently, a study by the National Highway Traffic Safety Administration showed that walking under the influence is a major cause of pedestrian deaths. Over one-third of U.S. pedestrians killed in 2011 had blood alcohol levels above .08 percent, the legal maximum for driving.

As we slip into the pervasive darkness of autumn and winter, it's a good time to remember that a few of the drunken pedestrians on our roads are moose. In memory of Buzzwinkle, and in lieu of flowers (which one of his buddies is likely to eat), Alaskan drivers are reminded to slow down and pay extra attention to the sides of the road for the next six or seven months.

Rick Sinnott is a former Alaska Department of Fish and Game wildlife biologist. The views expressed here are the writer's own and are not necessarily endorsed by Alaska Dispatch. Contact him at rickjsinnott@gmail.com