How a barefoot sawmill owner avoided making too much money 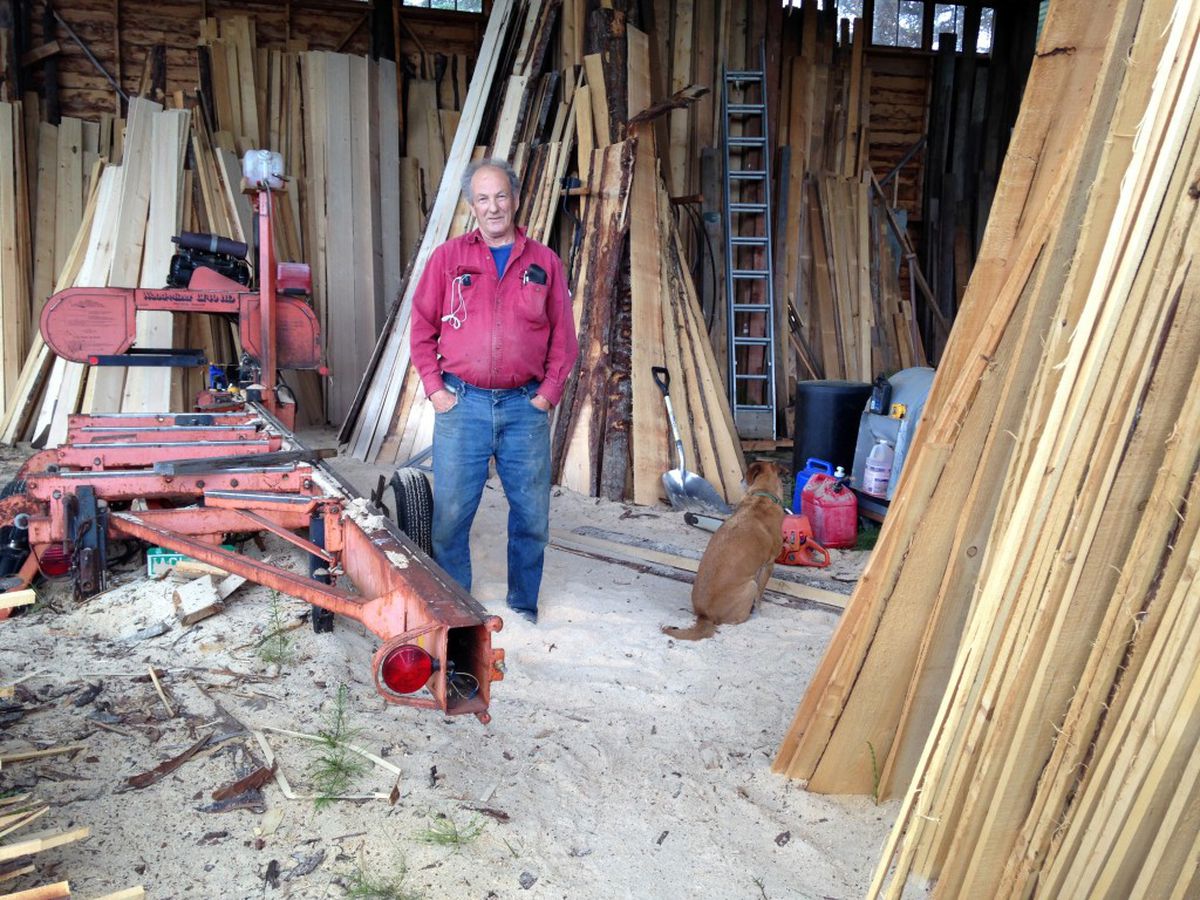 HOMER — As he has sawed up logs over the last 40 years, the ground has risen up under Steve Gibson's bare feet. Sawdust and wood chips grow ever deeper on his three acres in the woods east of Homer, like the friendships and conversations that fill the day.

Gibson sells lumber. He gives away philosophy, political observations, good advice and knowledge about how to work with wood.

"As you kind of approach the look-back period of your life, you know the W-2s are not all in United States currency. There's all the joy and satisfaction you got," Gibson said.

He said Small Potatoes Lumber makes hardly any money, and that's how he likes it.

"It's one of the nicer perks of this job, to tell you the truth," Gibson said. "If you had a high-paying job — let's say you were a high-priced lawyer, say you're making $200 an hour — how long can you sit around and bulls–t? You're constrained. And you know, I'm a sociable individual, and so that's automatically a deficit for me on the W-2. But the less you make, the more free you are to allocate a significant amount of time to bulls–tting."

Gibson taught me how to build with green wood so it won't crack or open gaps when it shrinks. He shared observations on the insecurity of growing up the son of a freelance writer, which made me think about how to talk to my kids about the wobbles in my own career. He celebrated my older son's budding interest in architecture and looked at his pencil-sketched design for a greenhouse when he was a teenager.

To buy lumber from Gibson you call his cellphone. He stops working and writes down what you want — the amounts, dimensions and when — in a pocket notebook and checks up on your life. Then he saws the order out of local logs and stacks it with your first name written on a scrap board. If he's not around when you pick up the lumber, the shop is open to leave payment on the counter.

Once, Gibson refused to sell me boards for a walkway. He didn't want his lumber wasted on an application where it would rot. He sent me to find treated wood.

As we talked last week a car pulled up with a former customer who greeted Gibson with a southern drawl and informed him that, although now retired and moved away, he had once built a house in Fritz Creek with Small Potatoes lumber. He proudly recalled the trim he installed. When you buy wood here and put it in your house, you remember where the boards came from and who sawed them for you. Gibson can tell you where the trees grew.

"The only time I seen Steve with shoes on was when we both got called for jury duty," the visitor said.

Gibson had already tried to talk me out of my Xtratuf boots as we walked around the saws and shop. He didn't care if I wore them, he just knew my feet would be happier, as his are, working all day cushioned in soft, fluffy sawdust.

Wood formed the grain of life from the first job he loved, cutting down trees in Oregon while he fought an indictment — successfully — over conscientious objector status to serving in the Vietnam War.

"The trees were big, God help me, six feet across on the stump, and there was a lot of craft in it, if not art," Gibson said.

But felling the big trees was hot work and Gibson and his wife Suzie began to wonder what it would be like to live farther north. When they finally left for Alaska, in 1974, they'd collected a caravan to drive up the highway, including a brother each and the mechanic who had fixed their car at a Midas Muffler shop and his family.

In Homer, Gibson worked as a longshoreman and started Small Potatoes. He raised sons, including one who got a philosophy degree at Dartmouth College and came back to help him run the sawmill. Gibson said philosophy is an excellent degree for this work.

"I think he would agree that it's quite useful. Placing priorities, reassessing, judgment," Gibson said. "To have your mind opened."

Gibson speaks like a well-educated man, but said academia would have limited him too much to a single specialty. He listens to recorded books under his ear protection.

Over the years, Gibson and his son have added new equipment to kiln dry wood and shape and plane it into various products, such as tongue-and groove-paneling of local cottonwood that shows a dramatic and sinuous grain. The compensation comes in satisfaction in producing these beautiful products. Although they sell for more than rough-cut wood, they require that much more time to make, so the money comes out the same.

In fact, Small Potatoes has slowed down of late. Suzie died last year of breast cancer after having the disease for 10 years. Last week, Gibson suffered bronchitis and the sawblades were quiet. Instead, the gentle sound of surf wafted over the sawdust from the beach beyond a meadow.

These days, he turns away at least half the business that comes in, lacking the time, energy or wood to produce everything people need. He doesn't care to raise his prices or hire help.

"This is a darn nice business, but I wouldn't want you to think it's economic," Gibson said. "You definitely could run it smarter than I run it, but it's really doubtful you could run it with more satisfaction than I've had."