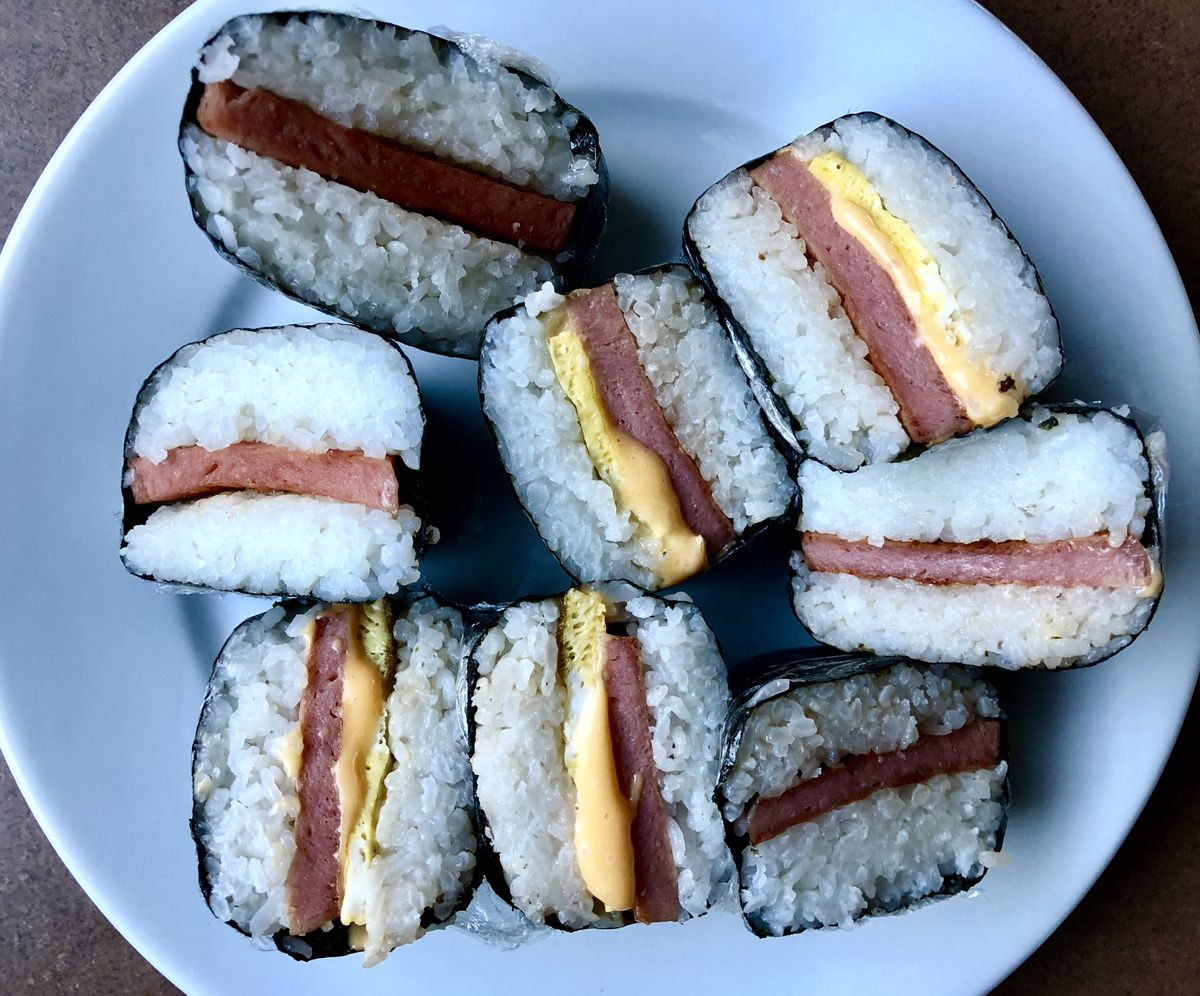 Spam musubi is a simple, portable, affordable savory snack. (It's also gluten-free!) Many Alaskans, especially the many us with Hawaiian connections and those who grew up in rural villages, have a nostalgic soft spot for the taste of Spam. Musubi is a Hawaiian take on onigiri, or Japanese rice balls, which come in numerous shapes with different fillings. With the right supplies, it's easy to make.

According to Kenji Kusano, one of Anchorage's most seasoned sushi chefs, and his wife, Sandy, who was raised in Hawaii, the hardest part of making musubi is getting the rice right. They insist on rinsing it well and soaking it before cooking it in a rice cooker. Stove-top cooking is hard, but Kenji gave instructions (below) for that as well. According to Sandy, the traditional method of making musubi is to use unflavored rice and fry the Spam. She buys her musubi forms in Hawaii and says Walmart has the best, cheapest rice and nori.

A very useful tip from Hula Hands, a Hawaiian restaurant that has been selling musubi in Anchorage for 18 years, was to pay close attention to temperature, keeping the rice and Spam as warm as possible and immediately wrapping it in Saran to keep the moisture in and soften the seaweed.

Kenji made me a very delicious musubi version of a ham and cheese sandwich, with lettuce and a tempura-battered pocket full of American cheese. That led me to experiment with sandwich fixings. My favorite was a musubi version of a breakfast sandwich that references a drive-thru Egg McMuffin in all its melty American-cheese glory. It's not health food, but it's pretty damn delicious.

3 cups (dry) Calrose rice, rinsed well, and soaked at least an hour before cooking in a rice cooker, using package directions. (Stove-top isn't preferred, but see instructions below for cooking in a pot.)

One package hand-roll-sized nori seaweed sheets. These are available at some Asian groceries and on Amazon. Regular will also work, but have to be cut to size with sharp scissors.

One can reduced-sodium Spam.

Materials: One musubi form (available at Asian groceries and on Amazon for about $7). You can also used a rinsed Spam can, cut with a can opener on the bottom edge, but watch those sharp edges.

Cook rice and keep warm in rice cooker. (If you desire, add Furikake seasoning to the rice to taste and mix well. This is how they do it at Chevron.) Thinly slice Spam into roughly 10 pieces and cook in a frying pan (no oil necessary) over medium heat until golden brown on both sides. Wet the musubi form and set it on a damp plate. Fill the form a little less than halfway with rice. Layer a slice of fried Spam, and, if desired, a splash of teriyaki sauce. Fill the form the rest of the way with rice. Press gently with the plunger to compact. While pressing plunger with one hand, slide the form up with the other to free the musubi. Carefully peel the plunger from the top layer of rice (a sharp knife can help if it sticks, remember to keep it wet.) Roll tightly in a slice of nori and wrap that tightly in Saran right away. It's best warm. When ready to serve, slice in half with a serrated knife. Keeps, well wrapped, for a day or so at room temp.

You'll need all the ingredients above, as well as:

Beat three eggs well. Coat a small frying pan with a generous layer of olive oil and heat over medium-low heat. Pour the eggs in to form a thin layer. Cook for about 5 minutes, until just set. Turn off heat and allow to cool and firm up in pan, on the stove for 3 to 5 more minutes. Remove from pan in one piece with a spatula and set on a cutting board. Using the plunger of the musubi form as a guide, use kitchen shears or a sharp knife to cut into rectangles. Cut American cheese singles in half.

Follow instructions for making musubi above, but add a layer of American cheese, egg and a squirt of hot sauce. Warm Spam and rice will melt the cheese. Serve immediately.

Rinse 3 cups Japanese short grain rice: Put it in a bowl, cover with water, stir in a circular motion, replace the water 4 or 5 times, until it's clear. Once it's rinsed, leave it to soak in a bowl for 45 minutes. Drain it. Place it in a pot with 3 cups of water over medium heat. Once it boils, turn it down to low. Set the timer for 15 minutes. When the timer goes off, the water should be mostly absorbed. Turn the heat to high for up to 30 seconds, until you can hear the rice crackle on the bottom of the pan. Cut off the heat, leave it be on the stove, covered (this is essential), for 15 minutes. DO NOT OPEN THE LID.