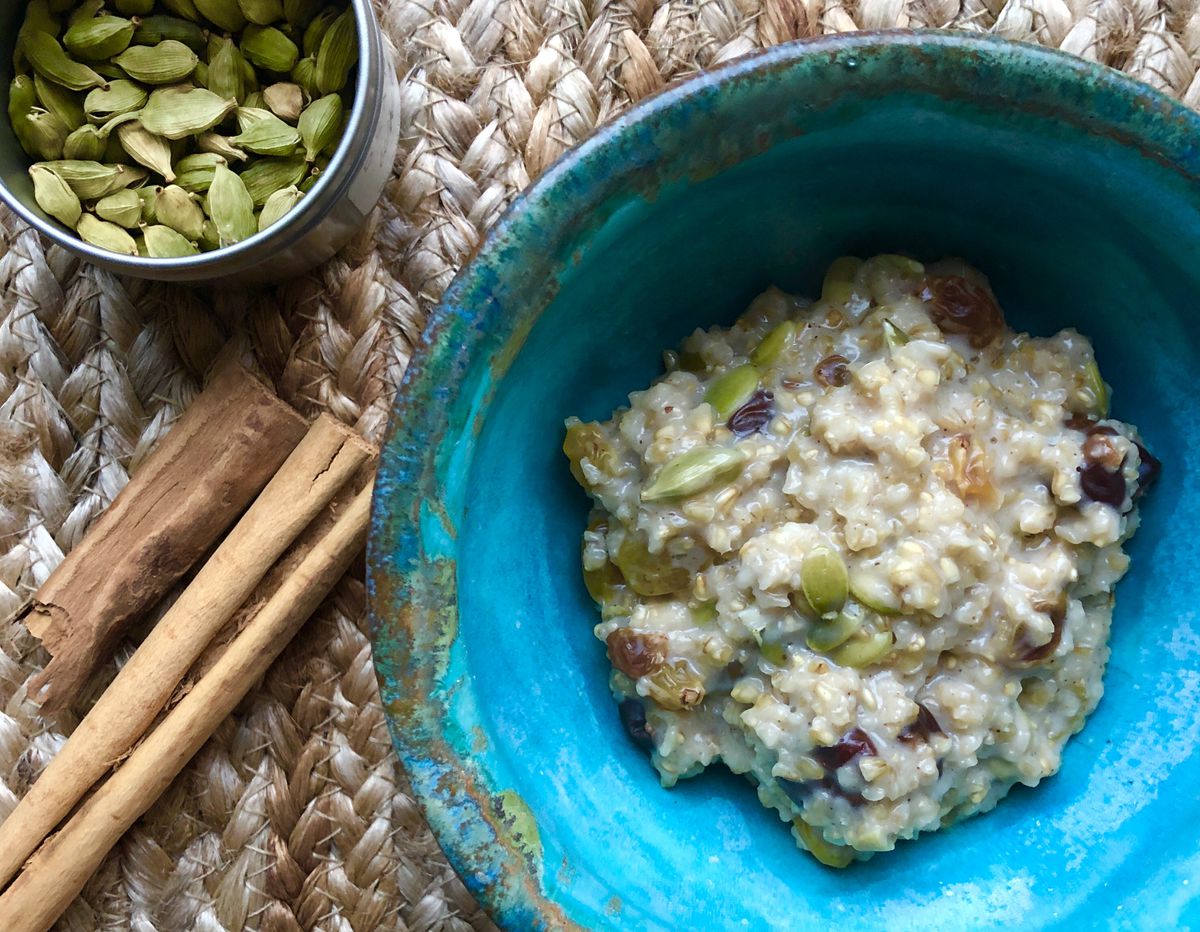 Hello, January. Temperatures have been below zero the last few days and the birch branches are glittery white with hoarfrost. I have been waking up craving oatmeal and and the warming spices in homemade chai. Recently, while consuming both, it hit me: What if I combined the two? The result was totally delicious, a great boost on a cold morning.

You could make a version of this oatmeal by sprinkling in ground cardamon, cinnamon, even ground ginger for that matter. My version calls for whole spices that I use when making chai and steeps the oats the way I steep my tea. The flavor is mellower and more tea-like than if you were to use ground spices.

I used 7-minute steel-cut oats from Bob’s Red Mill, which are available in quantity at Costco (where, incidentally, I got a decent deal on dried cherries and pepitas). You could use regular steel cut oats, just follow the package directions to adjust the ratio of milk to dry oats. You could also make this recipe with regular steel cut oats in a slow-cooker overnight on low. In that case, I would increase the liquid by at least a half-cup. They come out much silkier with the overnight method. (You kind of can’t beat waking up to warm breakfast in a good-smelling kitchen.) Boost the protein by adding your favorite nuts instead of the seeds or a scoop of tahini. Throw in other spices like clove, black pepper or star anise. I like to serve mine with plain Greek yogurt and a sprinkle of cinnamon. I don’t sweeten, because the milk has enough sugar for me, but you can also drizzle in some maple syrup.

My favorite hack: If you aren’t eating all the oatmeal immediately, you can scoop it while it’s hot into a small loaf pan or other small container. Then you can keep it, covered, in the refrigerator for several days where it will become very firm. Slice portions and heat to serve. Makes a great quick breakfast.

2 cups whole milk or non-dairy milk of your choice

1/2 to 3/4 cup pepitas, sunflower seeds or nuts of your choice

Over medium-low heat, mix all ingredients in a saucepan and bring to a boil. Stir constantly while it simmers for 7 minutes until thickened. Remove the ginger and cinnamon sticks. Serve with Greek yogurt and a splash of syrup.