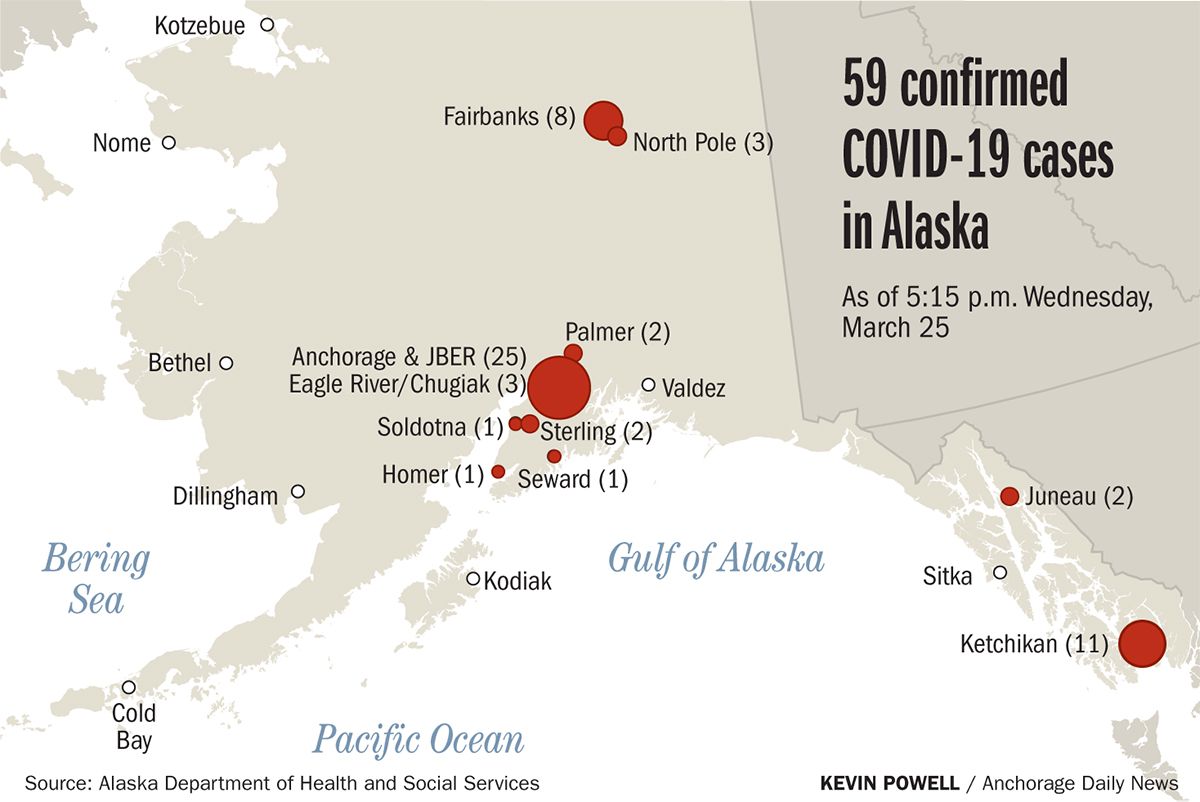 The number of confirmed COVID-19 cases in Alaska -- and the number of people requiring hospital care -- continues to climb as officials reported another 17 new cases Wednesday.

The tally brings the statewide number of cases of the infectious disease caused by the new coronavirus to 59.

The largest increase was in the Anchorage municipality, including Chugiak and Eagle River, with 11 new cases. The state reported one new case in Homer, two in the Fairbanks area including North Pole, and three in Ketchikan.

Eight of the newly diagnosed patients are men and nine are women, Zink said. Three are between 18 and 29, nine between 30 and 59, and five over 60.

Asked why health officials aren’t specifically identifying travel and other points of contact for the infected people, Zink said that’s a complicated, time-consuming process that might give people a false sense of security if, say, they weren’t grocery shopping the same day someone with a positive test was.

People need to stay home as much as possible either way, she said.

The virus is past the point of containment here, officials say.

“We have community transmission in the state of Alaska right now,” Zink said. “We need to all be doing these things regardless.”

Among the people who tested positive Wednesday was an airman assigned to the 354th Fighter Wing at Eielson Air Force Base outside Fairbanks, the wing’s public affairs department said. The airman “had recent travel history” in the Lower 48 but “contact with others was minimal due to installation policy” that meant he was placed in quarantine when he returned to the local area. He is receiving care from medical professionals on base and will remain isolated in a personal residence, wing officials said.

Another patient tested positive at the Chief Andrew Isaac Health Center in Fairbanks on Friday and the case was confirmed Wednesday, the Tanana Chiefs Conference, which operates the center, said in a statement. The person is quarantining in their Fairbanks home.

“We have been expecting that a TCC patient would test positive based upon the fast growing numbers of positive cases across the state, as well as seeing an increase of patients who are seeking care for fever and respiratory symptoms and who are receiving testing,” said Jacoline Bergstrom, executive director of Health Services.

One existing COVID-19 patient was hospitalized in the critical care unit in Juneau, state officials said. One Alaskan has died of the disease in Washington state last week, after contracting the virus there.

There are now 28 confirmed cases in the Anchorage municipality, two in Palmer, five on the Kenai Peninsula including Homer, 11 in the Fairbanks area and 13 in Southeast Alaska.

By late Wednesday, more than 68,000 confirmed cases had been reported nationwide, with more than 1,000 deaths.

On Wednesday, four state lawmakers representing remote villages joined with many Alaska doctors in asking the governor to declare a statewide “shelter-in-place” order in hopes of slowing the virus spread. The legislators, including Reps. Tiffany Zulkosky, Neal Foster, John Lincoln and Bryce Edgmon, emphasized the lack of health care facilities in rural Alaska.

The legislators wrote that if Dunleavy refuses to order a shelter-in-place mandate, the state should support local villages, cities and tribes in enforcing their own local orders.

The state has already ordered the suspension of dine-in service at restaurants, breweries and bars and the closure of entertainment facilities such as theaters and gyms. That health mandate is set to expire at 5 p.m. April 1.

When asked Wednesday whether the state would consider extending those restrictions, given the rise in cases statewide, Dunleavy said: “It’s very likely we’ll extend that.”