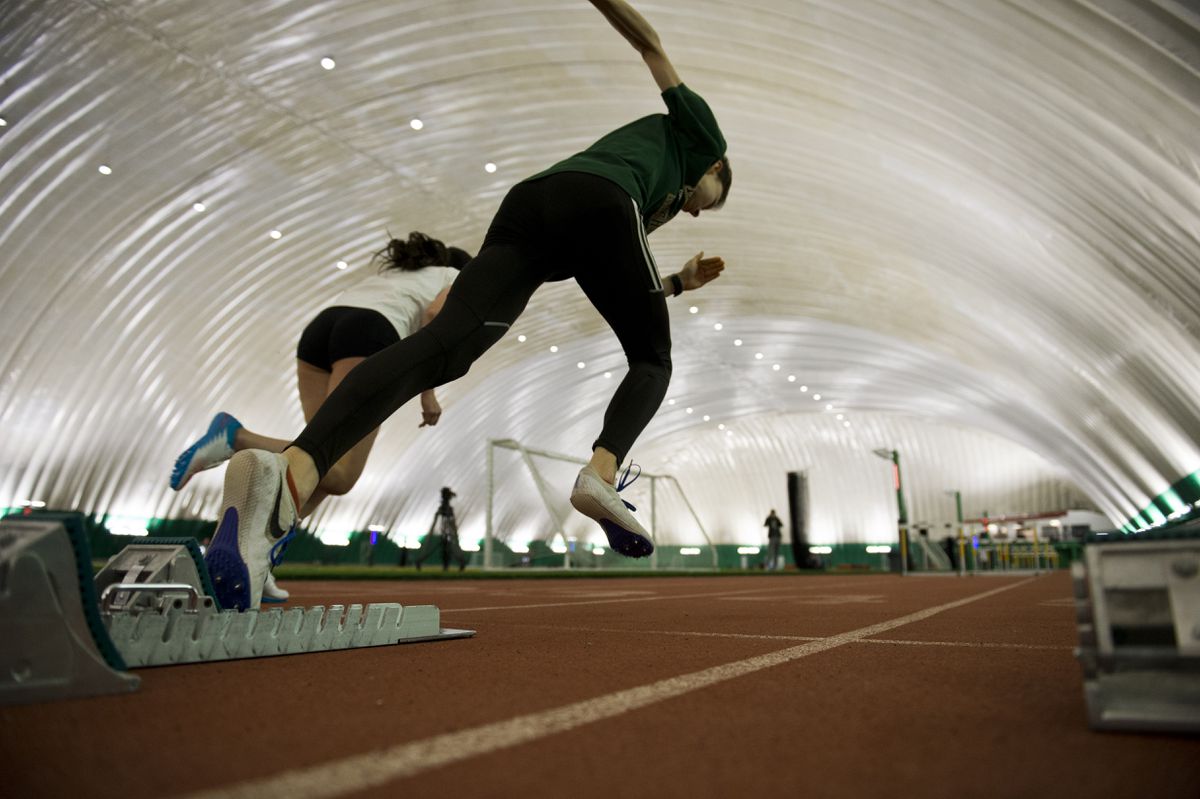 The Dome, reconstructed and reinflated, reopened to the public Thursday. The indoor sports facility, which houses a 400-meter track, turf fields for soccer and other sports, had been closed for about a year. The weight of snow collapsed its roof last January.

Jonathan Rubini, CEO of JL Properties, spearheaded the effort to finance the reconstruction, a project he said cost $7.5 million.

On Thursday morning, facility and community leaders gathered to mark the occasion while the University of Alaska Anchorage's track and field team trained nearby. Curtis Penney, new CEO of The Dome, led a tour to point out some of the improvements that came with the rebuilding project, including all-new turf and lighting.

The turf, a $1.3 million project, has slightly longer blades of imitation grass and will require a break-in period to be in prime condition, Penney said. The lighting is significantly brighter and more cost effective throughout the 180,000-square-foot air-supported structure, he said.

Other changes include the removal of some fitness equipment to create more space for warm-up activities in one corner. In another corner, a pickleball and badminton court was installed next to two new table tennis tables.

The relaunch of The Dome also comes with an enhanced plan to keep snow from damaging the facility in the future, said Russell Moore, The Dome's director of operations. That starts with a new monitoring system. Two lasers aimed at Mylar targets on the roof's interior provide real-time data on the roof's height. Should it start to buckle, the system triggers an alert with plenty of time to react before a collapse, Moore said.

When snow is forecast, staff can increase the air pressure and temperature inside the building. After it snows, decreasing the pressure slightly can cause snow to fall off the top, Moore said.

Additionally, multiple contractors have been hired for snow removal. That can be done by swaying and thumping seven ropes that are attached to the roof on the exterior, to get snow to fall off. Previously, The Dome's roof had four ropes for the purpose. In case those measures don't work, human snow shovelers can be lifted into position to do the work.

Michael Friess, head coach for UAA track and field, said it was a relief to have use of The Dome again. They resumed use of the track Monday.

In a normal year, his athletes would train there regularly from October to May. This year, they've relied on treadmills and the shorter running lanes inside the Alaska Airlines Center on campus. That affected development, particularly for some of his newer team members, he said.

"We can be normal. We can go over more than just one hurdle or two hurdles," Friess said. "We're looking forward to having this again."

[The Dome, crushed by snow a year ago, is set to reopen this week]

On Thursday, officials also announced the launch of an endowment called Friends of the Dome, created by Alaska Community Foundation, to keep the facility financially healthy. Penney said The Dome's board of directors will determine how money from the endowment is used.

The Dome is also partnering with Providence Health and Services Alaska and Orthopedic Physicians Alaska to develop a plan to allow the public free access for certain hours each week. The Dome Community Health Initiative's goal is to allow more people to have a chance to benefit from healthy activity.

"We feel that The Dome is a community asset to be used by as many people as possible," Penney said.