Scientists locked in ice planned for North Pole’s hazards. Then came the coronavirus. 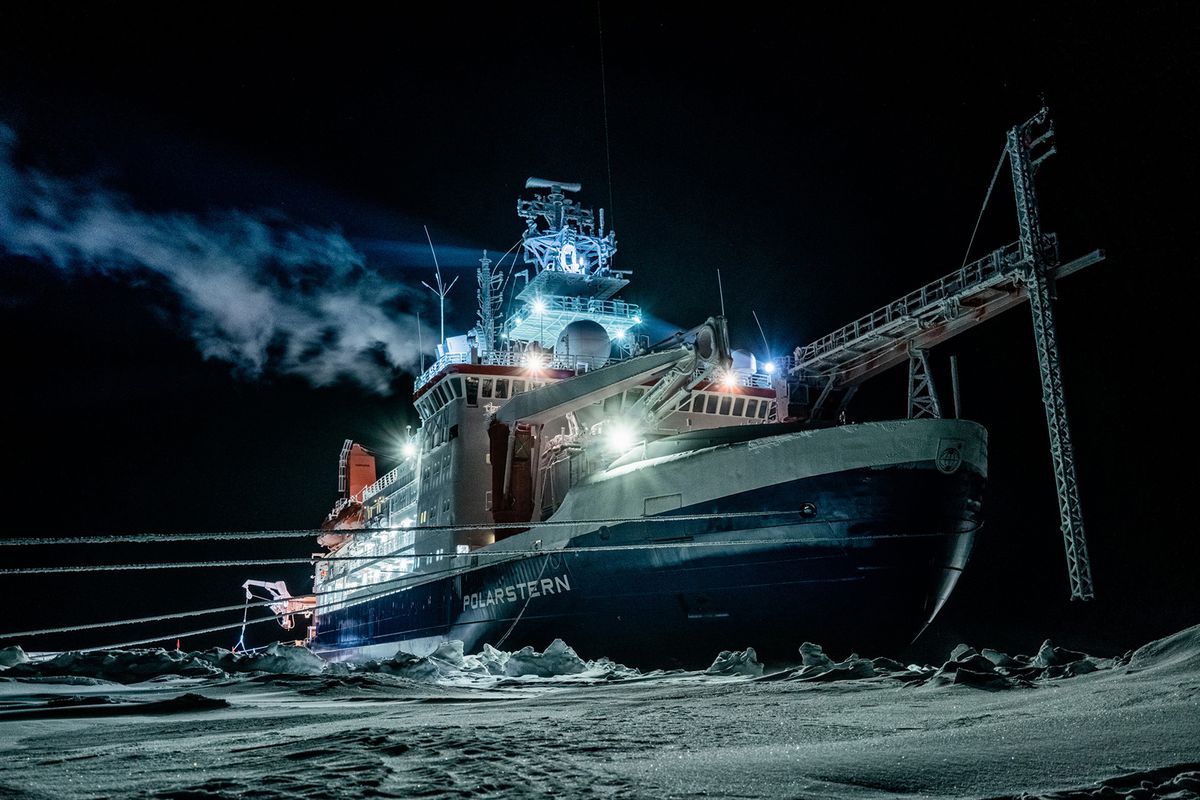 The RV Polarstern icebreaker will house more than 600 scientists from more than 20 countries before its year-long mission ends in September 2020. (Photo by Lukas Piotrowski / Alfred Wegener Institute)

The RV Polarstern icebreaker will house more than 600 scientists from more than 20 countries before its year-long mission ends in September 2020. (Photo by Lukas Piotrowski / Alfred Wegener Institute)

When 43 scientists set sail for the North Pole in early December, no one had heard of the strange new virus causing pneumonia-like symptoms in the Chinese city of Wuhan. As case numbers multiplied and hospital beds filled, the researchers’ vessel drifted with the Arctic sea ice through the deepest, darkest part of the polar winter, out of reach by video chat or phone.

After four months in near-total isolation, the scientists are returning to a world transformed by the coronavirus pandemic. Their universities are closed. Their colleagues are sick. And, most urgently, they have no place to land.

The port where they'd planned to dock, Tromso in northern Norway, is closed to them after the Norwegian government announced stringent restrictions on international travelers entering the country, organizers said. Leaders of the expedition are scrambling to find a port willing to accept the international group of scientists and allow them to board flights to the eight countries they call home.

"It's an immense challenge," said Markus Rex, leader of the Multidisciplinary drifting Observatory for the Study of Arctic Change (MOSAiC).

The year-long, $150 million project, during which a rotating cast of 300 scientists would take turns living and working aboard the icebound research vessel Polarstern, is the largest Arctic research expedition in history and had been planned for more than a decade.

The 43 scientists barred entry to Norway served on the January-to-February leg of the expedition. They left the Polarstern in early March aboard the Russian icebreaker Kapitan Dranitsyn and were due to arrive on land sometime this week.

An additional 54 researchers, who constitute the March-to-April leg, are on board the Polarstern. There will be three more crew changes between now and September, when the project ends.

At least, that was the original plan. But of all the contingencies considered during MOSAiC's lengthy planning process, a deadly pandemic was not one of them.

Organizers' biggest concern now is preventing the novel coronavirus from reaching the Polarstern, where it could wreak havoc among the isolated crew. The ship has an isolation ward and a doctor, but a rescue would be difficult if someone became severely ill. It takes at least three weeks to reach the ship by boat, and evacuation by air depends on mercurial polar weather conditions.

Rex said all researchers heading to the Polarstern will be tested for the coronavirus before leaving their home countries, subjected to a two-week quarantine, and tested again before being allowed to depart.

Already, at least one person associated with the expedition — a member of the project’s aerial survey crew — has tested positive for the virus. That person’s part of the project was postponed, and everyone who participated in an early March training session with him underwent a two-week quarantine.

Last week, organizers canceled the remaining research flights that had been planned for this spring. The aerial surveys would have supplemented observations conducted on board the Polarstern, helping scientists understand changes in the Arctic atmosphere. But the aircraft would have had to leave from the remote Norwegian archipelago Svalbard, which as of March 13 no longer allows outside visitors.

"It's a little outpost of mankind, and they don't have corona on that island, and they are doing everything to avoid importing it," Rex said. Canceling flights was "hard, but we had to do it."

It's less clear how to help the returning researchers on the Kapitan Dranitsyn. Though the scientists on the ship haven't been on land since December, one week ago their vessel rendezvoused with another icebreaker to pick up fuel, and Norwegian health authorities fear this might have brought the virus on board.

Rex is still unsure where the Dranitsyn will be able to dock, but he said the ship has enough fuel to reach another European port.

Rex also must find a new point of departure for the next rotation of researchers, slated to relieve their colleagues on the Polarstern in April. Because Arctic sea ice is most difficult to navigate in early spring, this crew change was supposed to be conducted via aircraft flying in and out of Svalbard — something that will almost certainly be impossible within the next month.

Organizers are in talks with other countries to come up with an alternate plan for swapping out the crew, including ferrying the next round of researchers to the Polarstern by sea instead of air. But many European countries have barred international travelers, and it has been difficult to find someplace willing to accept researchers flying in from all over the world.

"One of the great things about MOSAiC is its international flavor," said Matthew Shupe, an atmospheric scientist at the Cooperative Institute for Research in Environmental Sciences in Boulder, Colo.

"Now this virus is here, and it forces us to segregate, and that's just a huge challenge for us," said Shupe, who is also co-coordinator for the MOSAiC expedition. Under normal circumstances, the scientists would have spent weeks training together before heading out to the Polarstern. Now they must spend that time in quarantine.

"The whole thing makes me nervous," Shupe admitted. "I put my heart into this for more than a decade. ... Now, with this convergence of crises, I can very much see pathways where this virus makes it extremely difficult for us to complete our mission out there."

Rex said the current crew of the Polarstern is equipped with enough food and fuel to last several months, if necessary. They are prepared to remain on the ice until travel restrictions ease or a ship of replacements is able to reach them.

And he's confident the ship will be able to remain in the Arctic for as long as originally planned.

“MOSAiC is ill, but the symptoms are mild to moderate,” Rex said. “We will recover.”