A visitor’s guide to legal marijuana in Alaska: What you can do, what to avoid and what to expect 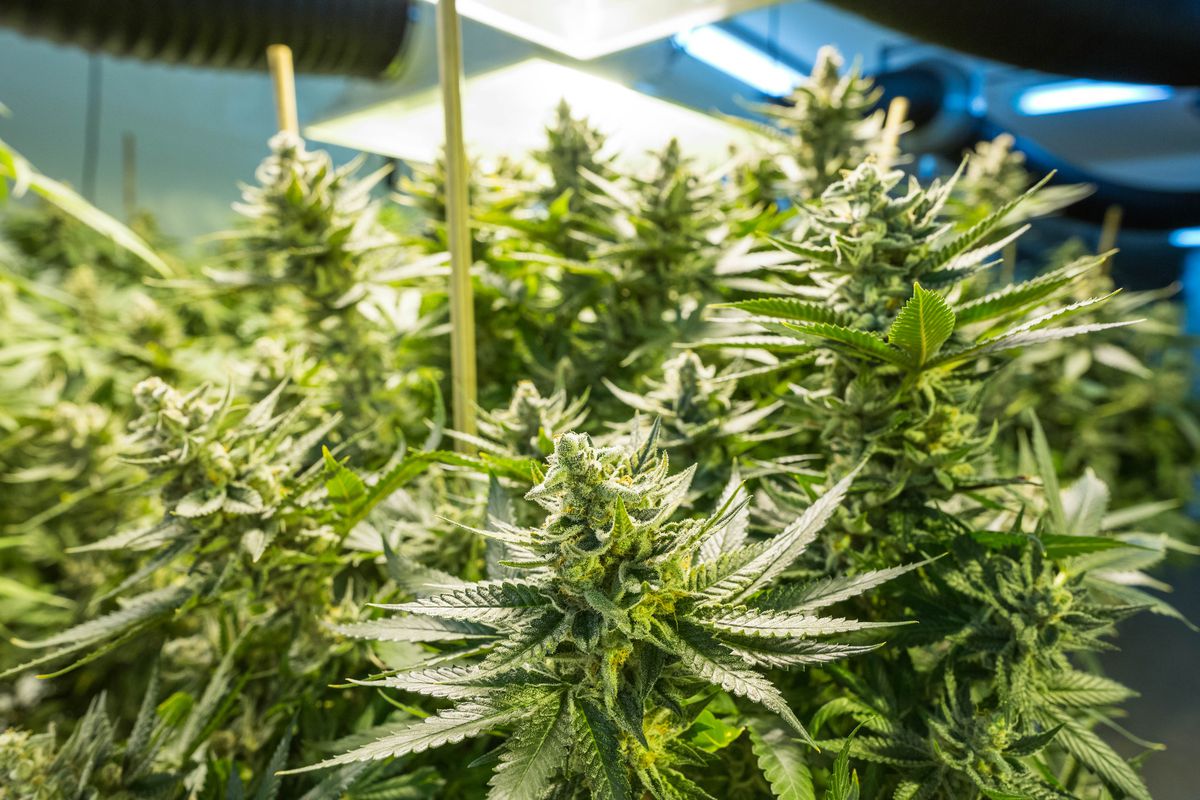 Marijuana plants at a cultivation facility in Anchorage, Alaska on Wednesday, May 13, 2015. Alaska Hydro Gardens, which was established to serve medical marijuana patients, was forced to shut down pending final regulations from the newly-created state Marijuana Control Board. (Loren Holmes / Alaska Dispatch News)

Marijuana plants at a cultivation facility in Anchorage, Alaska on Wednesday, May 13, 2015. Alaska Hydro Gardens, which was established to serve medical marijuana patients, was forced to shut down pending final regulations from the newly-created state Marijuana Control Board. (Loren Holmes / Alaska Dispatch News)

Editor’s note: This story was written before the COVID-19 pandemic, and some information might be out of date. With the situation continually evolving, we strongly encourage you to check ahead to determine the status of any business, park or activity you are interested in pursuing. To find the most up-to-date information about current health and travel mandates, check with the state of Alaska online and adn.com.

This summer will mark Alaska’s fourth tourist season with cannabis shops up and running. For travelers heading to the state, here’s what to expect.

But the state still has some places where marijuana is not allowed like national parks and some private property.

Cannabis stores have opened in many Alaska communities, from Fairbanks to Anchorage, Juneau and Sitka.

Bring your ID, because Alaska law requires businesses to check it. Some check it twice. Each shop is a little different, but marijuana will be behind the counter and a budtender can help you pick out what you want. You can smell and look at the product but not touch it. Alaska has seen a proliferation of products, so you can choose from edibles to capsules, to topicals, to regular old flower, which remains a best-seller for stores.

Most shops have their current menus online — prices for grams generally range from $10 to $20. It’s cash only. Some stores have ATMs. Budtenders like tips.

The state doesn't track customer information, but some shops have an in-house point of sale system with customer appreciation benefits, and those ask for your name and other information.

In Anchorage, the law says you must carry marijuana in the trunk of your car. If your car has no trunk (like a hatchback), it needs to be behind the last row of seats. Under city law, it's supposed to be in a sealed container that hasn't been opened.

If you get stoned and drive, you could get a DUI. Law enforcement goes by standard field sobriety tests to decide whether a person is considered impaired, along with other observations and evidence, Alaska State Troopers and Anchorage Police Department said. If drug impairment is suspected, a drug recognition officer will be called to conduct further evaluation, according to Anchorage police.

Under federal law, pilots who knowingly carry marijuana on a flight risk losing their certification. Alaska Airlines is clear that marijuana is not allowed on board, in carry-on or checked luggage. Smaller airlines have a similar policy.

But for years, airport police have been letting small amounts of marijuana through security checkpoints in Anchorage and Fairbanks. Airport officers enforce state law, under which a person can possess up to an ounce of cannabis. Transportation Security Administration employees will call police, who then conduct a field interview and make a record of the contact. In most cases, police then allow travelers to continue through the checkpoint with cannabis.

The Juneau Police Department is taking a hands-off approach, leaving it up to the discretion of TSA. They won’t confiscate your marijuana, JPD Lt. David Campbell said, but TSA may require you to leave it behind.

So if you fly with marijuana, local police may not stop you, but you're still taking a risk.

The U.S. Coast Guard is the law enforcement entity on federal waterways, including those traversed by Alaska’s ferries and cruise lines.

"Marijuana use is illegal federally," said Brian Dykens, a spokesman for the Coast Guard in Alaska. "As a federal law enforcement agency, the Coast Guard can seize marijuana on federal waterways, issue a civil penalty, and/or pursue criminal action under federal law.”

But the Alaska Marine Highway System, including popular Southeast ferry routes, isn’t actively seeking out people who are carrying marijuana, according to Shannon McCarthy, spokeswoman for the Alaska Department of Transportation and Public Facilities.

Holland America notifies people of what’s not allowed on the ship after they book a cruise, Samuels said. And marijuana shops in Juneau are required to have signage telling customers they aren’t allowed to take the product on a ship or plane.

Alaska is the first state to solve this conundrum with statewide regulations. In December 2018, the state Marijuana Control Board voted to allow existing marijuana shops to set up areas where people can use cannabis purchased at their store. In January 2020, the board approved two shops, one in Fairbanks and one in Ketchikan, to create “on-site consumption” areas.

Hotel rooms are considered private property and local rules in any given city would determine what's allowed, according to Glen Klinkhart, interim director of the state's Alcohol and Marijuana Control Office.

Many hotels have no-smoking policies, so smoking marijuana would be off-limits.

Your best bet is to ask your Airbnb host or a staff member at your hotel or other lodging.

If you're caught with marijuana, you could face a federal citation, which is typically a misdemeanor, said Peter Christian, spokesman for the National Park Service.

In 2019, there was just one citation for marijuana possession, within Denali National Park and Preserve, Christian said.

If you have a medical card, it won’t go far at most marijuana shops. Alaska was one of the first states to legalize medical marijuana in 1998, but its rules don’t allow for dispensaries. In 2014, when voters legalized recreational marijuana, a separate medical system was not developed, to the chagrin of some medical users. Regulators feared that if a dual system were created, medical prices and rules would undercut the regular commercial market.

[Timeline: Notable moments in 40 years of Alaska’s history with marijuana]

Alaska's laws don't allow for marijuana delivery, so you have to go to a store to get cannabis.

In December 2018, the Marijuana Control Board voted to allow for “on-site consumption” where existing marijuana shops can apply for an endorsement to set up an area where customers can use cannabis purchased at their shop. Alaska is the first place with state laws regulating such spaces.