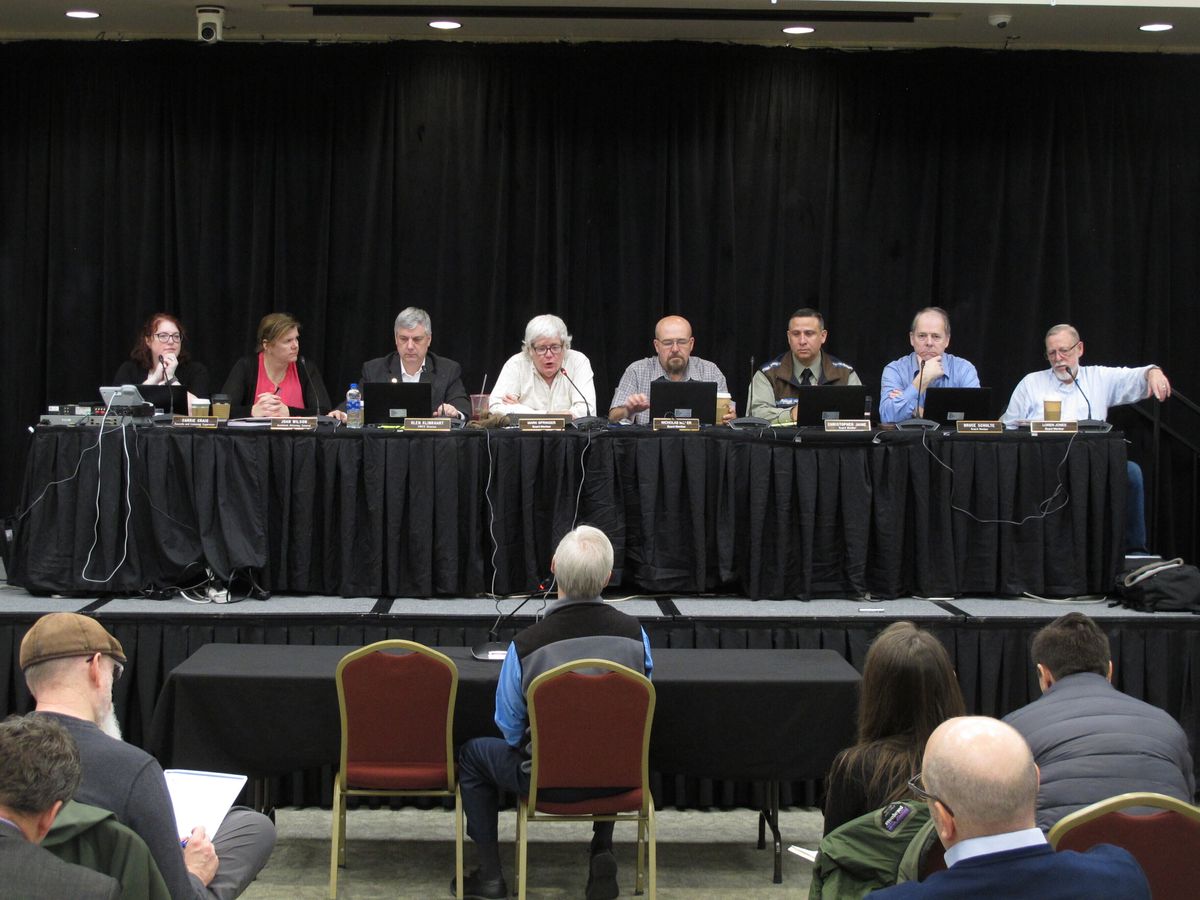 The Alaska Marijuana Control Board listens to testimony during a public comment period on Thursday, Jan. 23, 2020, in Juneau, Alaska. Alaska's legal marijuana industry hit a milestone Thursday, as regulators approved the first retail stores that will be allowed to have customers consume marijuana products on site. (AP Photo/Becky Bohrer)

The Alaska Marijuana Control Board listens to testimony during a public comment period on Thursday, Jan. 23, 2020, in Juneau, Alaska. Alaska's legal marijuana industry hit a milestone Thursday, as regulators approved the first retail stores that will be allowed to have customers consume marijuana products on site. (AP Photo/Becky Bohrer)

JUNEAU — The first marijuana shops in Alaska where customers can partake on-site have gotten approval, putting them on the leading edge nationally. Visions for the spaces range from a living room feel to a brewery-style tasting room with a TV to watch football games.

Zoning and ventilation requirements and restrictions on smoking can limit the growth of so-called cannabis lounges or cafes in places that permit them, such as some cities in California, said Morgan Fox, a spokesman for the National Cannabis Industry Association.

"I don't see it being something that starts proliferating heavily. But it's definitely something that should exist, and there should be options for social consumption, particularly because public consumption is still illegal," he said Friday.

A major consideration when regulators began considering on-site use in Alaska several years ago was providing a place for tourists to partake. On any given summer day, it's not uncommon for multiple large cruise ships to stop in southeast Alaska cities such as Juneau and Ketchikan, with tourists spilling out onto downtown sidewalks and buses shuttling them to whatever sight-seeing or adventure activities they've booked.

Ayme Zantua, a co-owner of Cannabis Corner outside Ketchikan, one of the two retail shops approved Thursday by regulators to offer on-site use, said some tour companies have expressed interest in bringing people there, and she said they’re open to it.

The business, which she said has largely served local residents, is about 10 miles north of the cruise ship docks. There’s talk of another dock being built, which would be closer, she said.

Cannabis Corner aims to open the consumption area sometime next month. She said the vibe will be comfy and cozy, with couches, a fireplace and bar table and stools - a mix of living-room and coffee-bar style.

"We don't want people to feel like they're going into a dive at all," Zantua said.

On Thursday, the Marijuana Control Board voted 3-2 to allow Cannabis Corner and GoodSinse in Fairbanks offer on-site use. Christopher Jaime and Loren Jones, who respectively hold the board's public safety and health seats, voted against. Jaime said he had lingering concerns about on-site use. Jones did not speak to his vote.

Chris Lindsey, director of government relations with the Marijuana Policy Project, said while some cities in other states have approved such actions, these were the first state-issued approvals.

Zantua is aware of the spotlight that comes with being one of the first approved and expects a slow rollout by her business at first, including possibly having locals who want to use the on-site area be dropped off and have a ride home. The business is on a bus route, she said.

"We're being very strict at first until we get a good feel for everything because all eyes are on us. We want to protect the community as well as have this cool opportunity for people," she said. "We don't know how it's going to go. It's new for everybody."

Rules governing on-site consumption took effect last year, after years of discussion. They call for consumption areas to be separated from the rest of the property, either by a secure door and having a separate ventilation system or by being outdoors. They are to have smoke-free areas for employees to monitor consumption, and people cannot bring in product not purchased at the site.

Daniel Peters, a co-owner of GoodSinse, expects to be open by summer and earlier if possible. He envisions the setup of their on-site area as similar to a brewery tasting room, with large couches, a long table, a TV for watching Sunday football games and a "show grow," where people can see part of the cultivation operation on the premises.

He expects at first much of the interest to come from local residents but also hopes being one of the first approved stores in the nation holds sway with tourists, too.

“Especially if I’m already planning a trip to Alaska, I’d make it a point to see that myself, if I was a tourist,” he said.