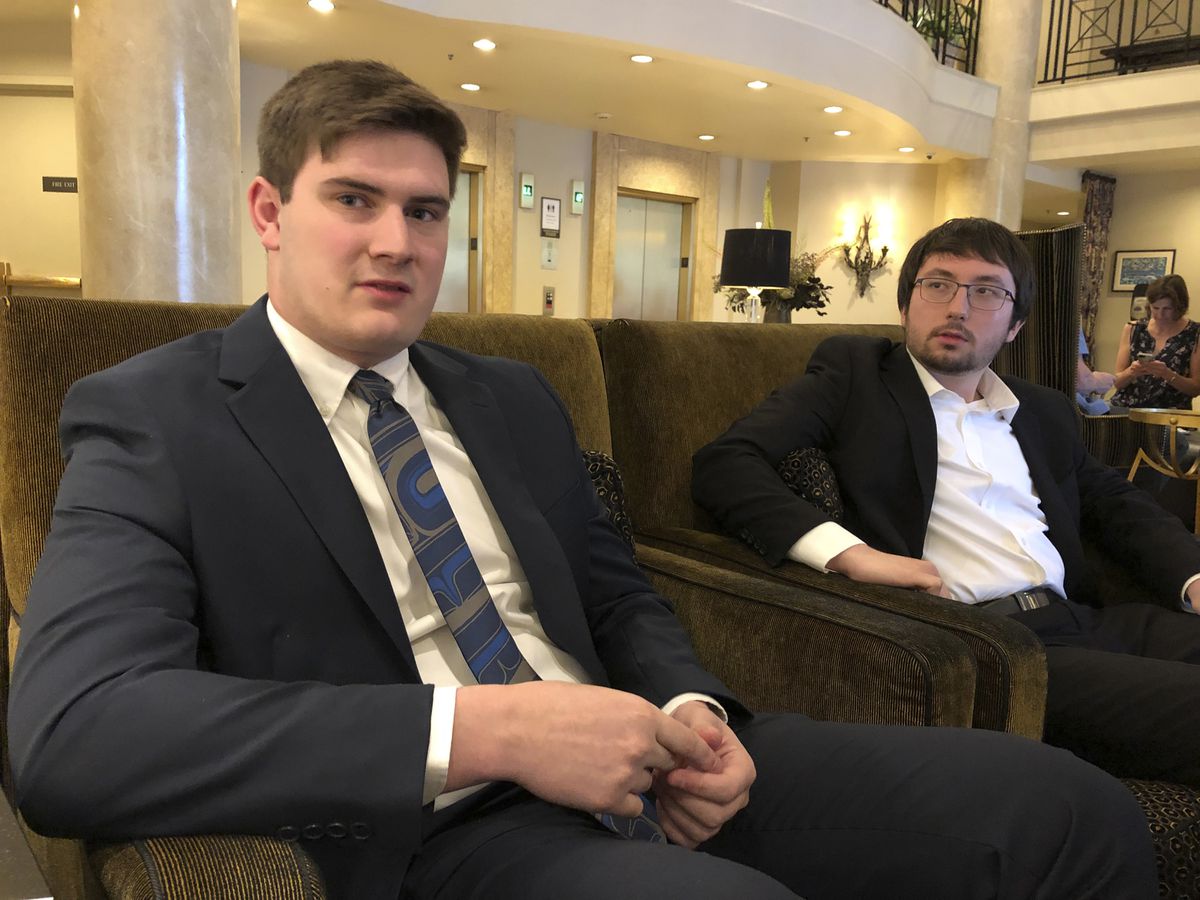 Nathan Baring, left, and Alex Lozano, two plaintiffs that are part of a lawsuit by a group of young people who say U.S. energy policies are causing climate change and hurting their future, speak during an interview on June 4, 2019, with The Associated Press in Portland, Ore. Baring, who was 15 when he joined the lawsuit in 2015, said he's disappointed the government has thrown up legal obstacles to the trial commencing. "I just think its just really disappointing to see the lengths that they go to, to not only not let us get the remedy that we're seeking, by letting us have a chance to present or case at trial." (AP Photo/Andrew Selsky)

Nathan Baring, left, and Alex Lozano, two plaintiffs that are part of a lawsuit by a group of young people who say U.S. energy policies are causing climate change and hurting their future, speak during an interview on June 4, 2019, with The Associated Press in Portland, Ore. Baring, who was 15 when he joined the lawsuit in 2015, said he's disappointed the government has thrown up legal obstacles to the trial commencing. "I just think its just really disappointing to see the lengths that they go to, to not only not let us get the remedy that we're seeking, by letting us have a chance to present or case at trial." (AP Photo/Andrew Selsky)

As the World Burns: The New Generation of Activists and the Landmark Legal Fight Against Climate Change

In 2015, 21 American young people aged 8 to 19, along with the organization Earth Guardians, filed a lawsuit known as Juliana v. United States. The case asserts that the federal government, through its actions that cause climate change, has violated the constitutional rights of young people to life, liberty and property, and has, moreover, failed to protect essential public trust resources. Called by one judge “no ordinary lawsuit,” a trial — if one is ever held — is anticipated by many to become the civil rights trial of our century.

At issue will be not that the U.S. government has failed to address climate change but that its policies promoting fossil fuel use have denied rights guaranteed by the Constitution. Likened by some to Brown v. Board of Education, the landmark civil rights case that desegregated schools, Juliana has the potential to force a bold move by the courts. Just going to trial, regardless of outcome, would bring the climate crisis to the nation’s attention in a way it has not yet achieved.

What the plaintiffs want is a remedy. They want a court to order federal agencies to “swiftly” decrease carbon emissions and develop and implement a national plan to stabilize the climate. A similar lawsuit in the Netherlands resulted in a ruling to do that — but then the Netherlands’ constitution, unlike ours, explicitly speaks to the health and welfare of its people.

In “As the World Burns,” author van der Voo follows the Juliana lawsuit’s slower-than-glacier advance through the legal process, presenting both the case itself, brought by attorneys with Our Children’s Trust, and the lives of the plaintiffs as they’ve aged into effective advocates for action on climate change. It’s at once a dispiriting look at the fumbling and inertia of our society, including the judicial system, to respond to the climate crisis, and an encouraging, celebratory portrait of generation leaders who will not allow us to continue turning our heads.

In a sense, this is a book in which nothing happens. The opening chapter, which takes place on Oct. 29, 2018, shows the plaintiffs and their supporters protesting on courthouse steps after the U.S. Supreme Court ordered a temporary stay against the trial that had been set to begin that day. In subsequent chapters, the author expands on the history of the case, the arguments in its favor and the lives of the young people, who she interviewed at length while visiting them at their homes and in the places they seek to protect.

The author carries the story forward until early 2020, when a three-member panel of the Ninth Circuit Court of Appeals dismissed the case on a 2-1 vote, arguing that the court does not have the authority to tell the executive branch what to do about climate change, and then to Our Children’s Trust’s appeal that asks that the full Ninth Circuit court review the case and send it back to the lower court for trial.

That is where the case stands today — waiting for the Ninth Circuit court to rule on the appeal. (A timeline of the case, from its first filing to the present, through many government objections, judges’ rulings, court stays, oral arguments, hearings, petitions, additional briefs, motions and delays of various kinds, can be found online at ourchildrenstrust.org.)

The heart of the book, then, is the human story: the lives of the young plaintiffs from Oregon (11 of the 21) and elsewhere in the country, including New York, Florida, Louisiana, Hawaii and Alaska, and from various backgrounds, cultures and circumstances. For years now, these young people have learned about government, activism, public speaking, law, organizing, and the science of climate change. They’ve appeared in the media and before congressional committees. They are an impressive bunch, and so are their supportive parents and their attorneys. They have not lost heart, although they often enough express frustration about the ticking clock and the failure of government to look beyond the interests of the fossil fuel industry to consider the future. They see their families and communities threatened right now by drought, fire, flooding, hurricanes, dislocation and financial hardship brought about by climate change.

The one Alaskan plaintiff is Nathan Baring, a resident of Ester, now 21 years old and a college student who has interned with Sen. Lisa Murkowski and the Alaska Legal Services Corp. He aspires to become a lawyer.

It’s late in the book when the author visits Baring in Fairbanks. Together, they walk through Creamer’s Field, a migratory waterfowl refuge, and take note of permafrost thaw and its effect on tilting trees and other vegetation. Van der Voo reviews Alaska’s red-state status, reliance on the oil and gas industries, budget woes, and the denialism of its political leaders. The two of them discuss the primacy of polar and climate research at the University of Alaska and how budget cuts threaten the ability to mitigate warming and prepare for the future.

It’s beyond the scope of this book but still worth noting that Our Children’s Trust has represented and supported young people in all 50 states to protect children’s rights and advance climate action at the state level. In Alaska, a 2011 lawsuit brought by six Alaska children and their guardians, known as Kanuk v. State of Alaska, alleged that the state’s failure to address climate change violated the Public Trust Doctrine. This case went all the way to the Alaska Supreme Court in 2014, when the court recognized merits of the arguments but ultimately ruled that the situation was a political one to be decided elsewhere.

In 2017, in Sagoonick v. State of Alaska, 16 young Alaskans filed a new lawsuit alleging that the state’s fossil fuel policies have placed them and their homes, villages and cultures in danger, in violation of the Alaska Constitution. This suit was heard by the Alaska Supreme Court over a year ago and awaits a ruling.

“As the World Burns,” by bringing readers into the lives of young people calling upon their elders and government to face the urgency of the climate crisis, should inspire all Americans to consider what must be done to maintain a livable planet for the next, and the next, generation.