Shellfish and seaweed farms are a growing industry in Alaska 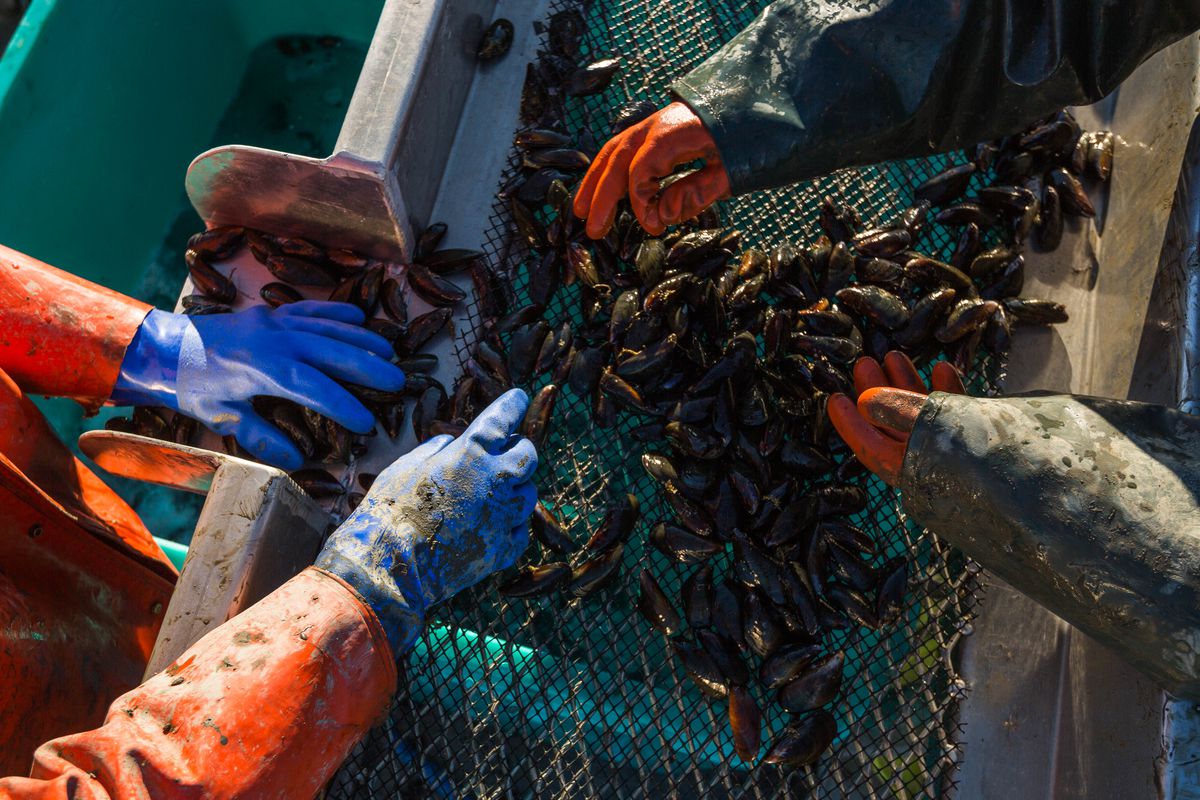 Underwater and out of sight are the makings of a major Alaska industry with two anchor crops that clean the planet while pumping out lots of cash: shellfish and seaweed.

Alaskans have applied for over 2,000 acres of new or expanding undersea farms, double the footprint from two years ago, ranging from .02 acres at Halibut Cove to nearly 300 acres at Craig.

Nearly 60% of the newest applicants plan to grow kelp with the remainder a mix of kelp and/or Pacific oysters, said Cynthia Pring-Ham, aquatic farming coordinator at the Alaska Department of Fish and Game, which issues the permits. Fish and Game partners with the state Department of Natural Resources, which leases the tidal and submerged lands for farms.

[Could mariculture morph into a billion-dollar industry for Alaska?]

Currently in Alaska, 36 operators are producing primarily Pacific oysters in Southeast, Prince William Sound and Kachemak Bay. Their combined crops of about 2 million bivalves have sales topping $1.5 million from a mostly local customer base.

It’s the faster-growing seaweed that has spawned wider interest, especially from regions that aren’t as hospitable to growing shellfish.

Now, besides kelp, 21 Alaska growers also have added dulce, nori and sea lettuce to their macroalgae or shellfish menus. It will go into a global commercial seaweed market that is projected to top $22 billion by 2024, with human consumption as the largest segment.

The interest is quickly spreading to other Alaska regions. This year two kelp applications were submitted from Sand Point and queries have come from the Pribilof Islands, said Julie Decker, chair of a state mariculture task force created in 2016 by former Gov. Bill Walker to lay the foundation for “a $100 million industry in 20 years.”

“People are calling from St. Paul and St. George in the Bering Sea. They are interested and want to know what they need to do to get started,” she said.

“I can’t see a single downside to it,” said Sam Rabung, director of the Fish and Game commercial fisheries division and a task force member.

Rabung, who began researching kelp in Japan in the 1980s and has worked in salmon enhancement and mariculture in Alaska for over 35 years, called diversification into seaweed farming “the biggest change to the industry I’ve seen in the last five years.”

It is getting legs for several reasons, he said.

“It’s a really good fit with our existing fishery infrastructure. We have a blue workforce, an ocean workforce of fishing communities, vessels, fishermen, processors that in many cases get used in a kind of boom and bust manner. This gives an additional shoulder to a season,” he said.

“The giant kelp that we’re focusing on in Alaska right now, the brown algae, can be used for everything from food to nutritional supplements to animal feed ingredients, biofuels, soil amendments and everything in between. We’re just at the tip of the iceberg in terms of the uses of algae,” he added.

Plus, growing seaweed benefits the planet. As the “trees” of coastal ecosystems, seaweeds pull massive amounts of carbon from the atmosphere, absorbing five times more than land-based plants.

But planting the earth-friendly kelp fronds in the fall and plucking them in the spring is the easy part.

“What do you do when you harvest them? You need to have something in place to take the product and make use of it before you ever plant your seeded lines,” Rabung said.

As the fledgling algae industry develops, the task force is advocating that some growers form clusters to “really get things going.”

“Getting a larger number of farms concentrated around a hub to get the synergy to create that critical mass and reduce the cost of logistics, transports, and support services that the farms need,” Rabung explained. “We need it to become a company, an industry. That’s where the state will see its biggest benefit.”

“They need to know there is enough steady volume to make sure it’s worthwhile,” Rabung said.

An early obstacle for aspiring Alaska growers, Rabung said, is financing, although the state’s revolving loan fund has made its first loan for a kelp farm.

He said another is “acceptability.”

“The way our statutes are written, aquatic farming is the lowest priority use of coastal waters,” he said. “When we review a farm permit, we’re looking at its compatibility with existing uses as one of the criteria, such as fisheries. We can’t put farms in places that are traditional seine hook offs or troll drags or dive fisheries or subsistence harvest areas.”

Applicants also must be aware of navigational hazards and marine mammal haulouts when they are siting their farms. An online, interactive GIS map showing site areas and other data for Alaska’s entire coastline is being compiled and will help provide more information. It also can be shared with state agencies to help speed up the permitting process which has a two-year backlog.

“We’re kind of victims of our own success because for years we’ve been building a foundation and network of people all working in the same direction. Now the industry is stepping up and submitting applications for new farms and it coincides with staff and budget reductions at DNR,” Decker said.

She added that the Dunleavy administration is “enthusiastic” about the mariculture industry’s potential.

“We’re getting really good interest and support,” Decker said. “All the pieces are in place to move forward.”

Farmer training sessions will be held next year in Ketchikan, Sitka and Kodiak and perhaps other communities, Decker said.

Applications should now be in the hands of Alaska salmon fishermen and processors hurt by the 2016 pink salmon fishery failure.

Funds are being distributed by the Pacific States Marine Fisheries Commission.

Salmon permit holders who show losses from the pink bust will split $31.8 million based on average dockside values over even years from 2006 to 2014.

Skippers are responsible for compiling data for their crews in applications that are due Oct. 31. The commission will then distribute applications to crew members to apply for disaster payments through Jan. 31, 2020. The relief funds should be in hand six to eight weeks after an application is accepted.

Alaska processors also must apply by Oct. 31 to receive their share of $17.7 million in relief funds. Workers will be eligible for an equal share of 15% of an eligible processor’s total disaster payment.

The funds also include $3.63 million for pink salmon research.

Of that, $450,000 goes to Kodiak’s Kitoi Bay Hatchery for its Saltwater Marking Sampling project. The Southeast Alaska Coastal Monitoring Survey will get $680,000 to help with pink salmon forecasting research. And $2.5 million will go to the Alaska Hatchery Research Project that since 2011 has studied interactions of hatchery and wild salmon in Prince William Sound and Southeast.

Details are still being worked out on distributing $2.4 million to municipalities that were affected by the pink crash.

China will add an additional 10% tariff to imports of US seafood products starting Sept. 1, bringing the total to 35% in the latest escalation in the trade war with Donald Trump. Undercurrent News reports that frozen Alaska salmon, cod or pollock that go to China for processing into patties or portions and are then re-exported will remain exempt from the extra taxes.

In response, Trump sent out a series of Twitter messages saying: “We don’t need China and, frankly, would be far better off without them. Our great American companies are hereby ordered to immediately start looking for an alternative to China, including bringing your companies home and making your products in the U.S.A.”