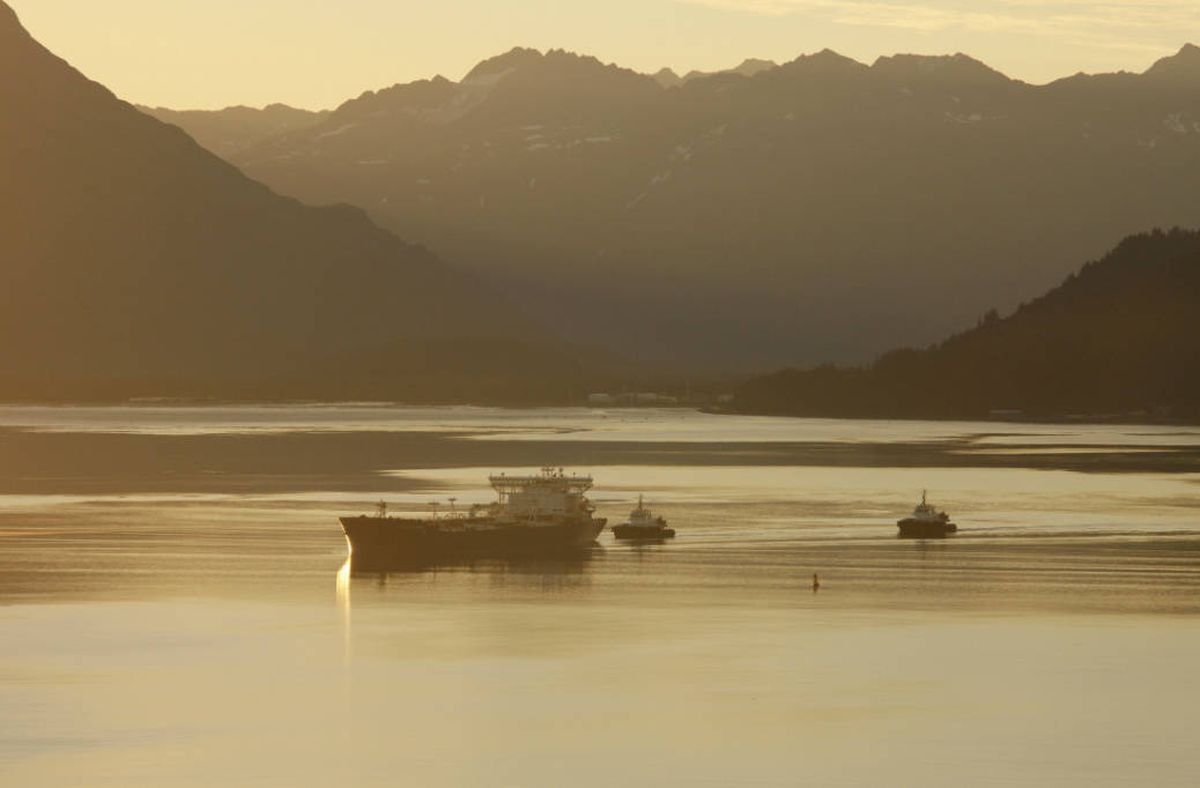 An unladen oil tanker that’s part of a growing number of foreign-flagged vessels transporting Alaska crude reportedly dragged its anchor for nearly 4 miles in rough Gulf of Alaska seas while waiting for an escort to Valdez in mid-April.

The mishap ultimately resulted in a damaged windlass, or anchor winch, aboard the Bermuda-flagged tanker Stena Suede but little else, according to collated reports. However, it was enough to raise concerns from the federally mandated public oversight group tasked with oil industry activity in Prince William Sound as well as the group of marine pilots that escort large vessels through Southcentral Alaska’s often shallow, tricky nearshore waters.

Continually increasing winds caused the crew to reverse its course of action and attempt to pull the anchor after several hours. During the attempt to retrieve the anchor, the Stena Suede dragged it for nearly 4 miles — to a position 16.5 miles from Hinchinbrook Entrance — over 30 hours. After the windlass motor failed, the crew reset the anchor and worked to repair the anchor windlass, based on information from the council and a vessel tracking service.

PWSRCAC spokeswoman Brooke Taylor said in an interview that the attempt to anchor in the open Gulf of Alaska amplified the council’s attention to the increased frequency of foreign tankers chartered by North Slope producers to take Alaska oil to refineries across the globe.

Taylor stressed that the citizens’ council mostly wants to know more about the vetting process that oil companies use before selecting a vessel operator to carry out a chartered mission.

“We were very lucky that it wasn’t a worse situation,” she said, noting that the Stena Suede was unladen with crude oil but still held thousands of gallons of fuel and such situations put the crew at risk as well.

“There’s less risk (with an empty tanker) but there’s still plenty of fuel and things that could hit water had this situation gone differently,” Taylor said.

U.S. Coast Guard officials said during a May 6 videoconference council meeting that crew leaders on the Stena Suede asked if the Coast Guard had any objection to them “drifting” in the Gulf but did not request assistance.

A Coast Guard spokeswoman did not respond to questions about the Stena Suede in time for this story.

Those are at Knowles Head in Prince William Sound, east of the Homer Spit in Kachemak Bay, and in St. Paul Harbor near Kodiak.

While Martin did not specifically reference the Stena Suede in his letter, he wrote that in the association’s opinion, “there is no safe anchorage to be had in the Gulf of Alaska within our pilotage area for large seagoing commercial vessels other than those listed above. This includes adjacent offshore waters. Anchoring in open waters in the Gulf of Alaska is at best imprudent, and at worst negligent, given the unpredictable environmental conditions which may be encountered at any time of the year.”

Alaska marine pilots board large ships at predetermined points off the state’s coast and assist the crews in navigating the near shore waters that often have unique tides or highly unpredictable weather, among other factors.

Martin also wrote in testimony submitted to the council that the Stena Suede also received damage to its bow mooring equipment but it was made satisfactory for docking at the Valdez terminal and the rest of the tanker’s voyage was uneventful.

“It’s a subset of the shift in (Alaska North Slope oil) since the pandemic started,” Keithley said.

The price collapse that hit Alaska producers and the state budget so hard last spring was the result of a drastic drop in demand for transportation fuel in the U.S. That forced refineries along the West Coast where Alaska’s oil is typically sent to sharply curtail production, and in turn their oil needs, pushing producers to charter foreign tankers that usually end up in China, he said.

According to Keithley, Alaska producers sent an average of approximately 2 percent of their oil to foreign refineries in the years prior to 2020. Last year it jumped to 11 percent, peaking at 17 percent in the second quarter when the global oil glut was at its most severe.

He said logistics dissuade the large producers from using their own tankers to make the cross-Pacific journey and therefore they often contract with third-party vessel operators to move their oil.

The foreign tankers are likely to keep coming as long as demand from West Coast refineries remains subdued and it has at least temporarily stabilized at about 20 percent less than 2019 levels, Keithley said.

“The pandemic certainly started this; it’s a question of whether those West Coast refineries come back up to full demand and I don’t think anyone knows the answer,” he said, noting some California refinery owners have committed to convert their facilities to renewable diesel production.

A chart provided by the council indicates that as of May 6, foreign-flagged tankers have loaded in Valdez 11 times since the start of 2020 out of 279 tanker visits. Foreign tankers made just eight calls on Valdez in the three years prior.

Regardless of why there are more foreign-flagged tankers calling on Valdez, Taylor said the council primarily wants to learn more about how the unique operating best practices and regulatory requirements in Alaska are communicated to the crews of chartered tankers before they start their journey here.

“Are the risk factors and the knowledge that people need to navigate our waters — are they being communicated?”

Rob Kinnear, shipping manager for Hilcorp Energy’s subsidiary Harvest Midstream, said during the council board meeting that the company, which owns 49 percent of the Trans-Alaska Pipeline System, has chartered vessels when the tankers that normally make the West Coast run were in dry dock or when oil demand has waned on the West Coast.

Each charter operator gets port information and vessel traffic manuals — about 800 pages of stuff — before sailing to Alaska, according to Kinnear.

“Those documents are present on day one — probably 30 days out from when the vessel is going to load,” he said.

The unique aspects of bringing a tanker into Prince William Sound are discussed with the vessel master in a call about a week out, Kinnear added.

He said the incident involving the Stena Suede, which was chartered by Harvest, reemphasized the inbound tanker protocol.

Alyeska Pipeline Service Co. spokeswoman Kate Dugan wrote via email that foreign tankers are required to have the same design features, such as double hulls, as those purpose-built for the Valdez run under the 1990 Oil Pollution Act.