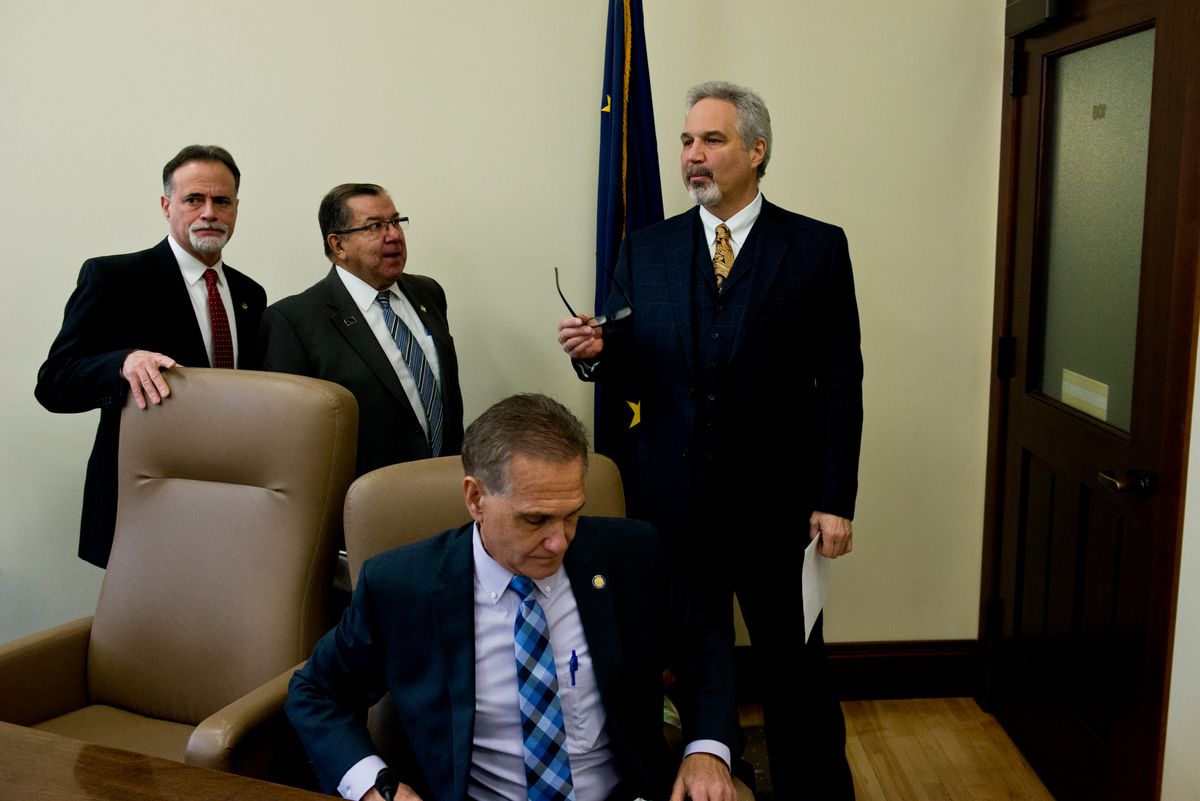 This week 13 lawmakers voted to drain every single dime out of the statutory budget reserve — also known as our savings account — to pay oil companies more money than the suggested maximum amount. Why? Well, it's not really a very well-kept secret that come election time their coffers are stuffed from oily folks to make sure our rainy day funds will make the "transfer of wealth" cycle from state funds to the richest companies in the world. Existing law, well paid for under the Parnell administration, requires $74 million be paid in subsidies this year. Our brain trust has authorized an additional $288 million beyond the already budgeted payment. Who does that? Truth be told, the $74 million is just a suggestion — it's discretionary. The governor vetoed oil tax credits and a mandatory Permanent Fund dividend payment last year. Guess which one the Senate majority restored? Here's a hint: Not your PFD.

What should be embarrassing for our representatives who need oil booms and skimmers around their offices, they are proud of. They call it "austerity." I do not think that word means what they think it does.

[Alaska Senate tees up income tax and votes it down]

The majority has asked our most vulnerable to sacrifice so corporations can feel more security. That's just gross. The Alaska Pioneer Homes are told they need to give up funding. Hey, old people who built this state and gave their lives to developing our towns and boroughs … how do you like cat food? You need to give up your old age security so oil companies can keep lobbying our legislators with fancy dinners and lots of drinks.

Sen. Bill Wielechowski asked the body if they stood for the people of Alaska. Instead of answering the question with an obvious "no" answer, they asked him to stop talking. "We need a break!" Wah! Wah! What a load of snowflakes melting under the scrutiny of someone who has a "Not for Sale" sign on his office door.

Now the headlines are about the Anchorage School District looking to pink-slip 200 teachers because they don't have the budget. Curious. We can overpay oil companies by millions because they need some sort of Thunder Shirt therapy for upcoming fiscal storms, but the futures for teachers doesn't pack the same importance. Why would they need to know if they have a job or not? I mean, do people need to know that if they are getting a mortgage or signing a lease? Oh, wait. They DO! Oh, well. Maybe there will be a long line of oil field jobs that require teaching certificates to make up the difference.

The truth of all of this is there's a good chance I will be writing the same column a year from now. It's that old definition of crazy: Keep voting for oily folks and maybe they'll take care of old people and schools because they finally see the light. Pure nuts.

You can keep calling and weighing in with the majority and if there's not a big hairy check attached to their campaign, it doesn't matter. Sorry. Show me when it has mattered. I'll wait.

See, that's what I thought.

My hope for this coming summer when lawmakers go back to their districts is people can take a break from their hunting and gathering and shuffling of family tourists to let it be known that they disagree with how Alaska's interest is represented. The checkout line at Costco is a great place to explain your disdain — why not? At least Costco is on the road system. I'm sure they'd disagree, but I think lawmakers should feel just as uncomfortable and unsure about their own situations as so many of our pioneer Alaskans are right now in watching their funding get bantered around by politics. Why be polite to people playing politics with our pioneers, prosecutors and pupils?

All is not lost in Juneau. Way to go to the House for calling out one of their own for racism and misogyny that was censured this week. It's a start. Thanks for that.

My dear Alaskans, we must keep explaining the standard to legislators who answer to those pulling their leashes. Who knows, maybe someday they will listen or be replaced by those who will.