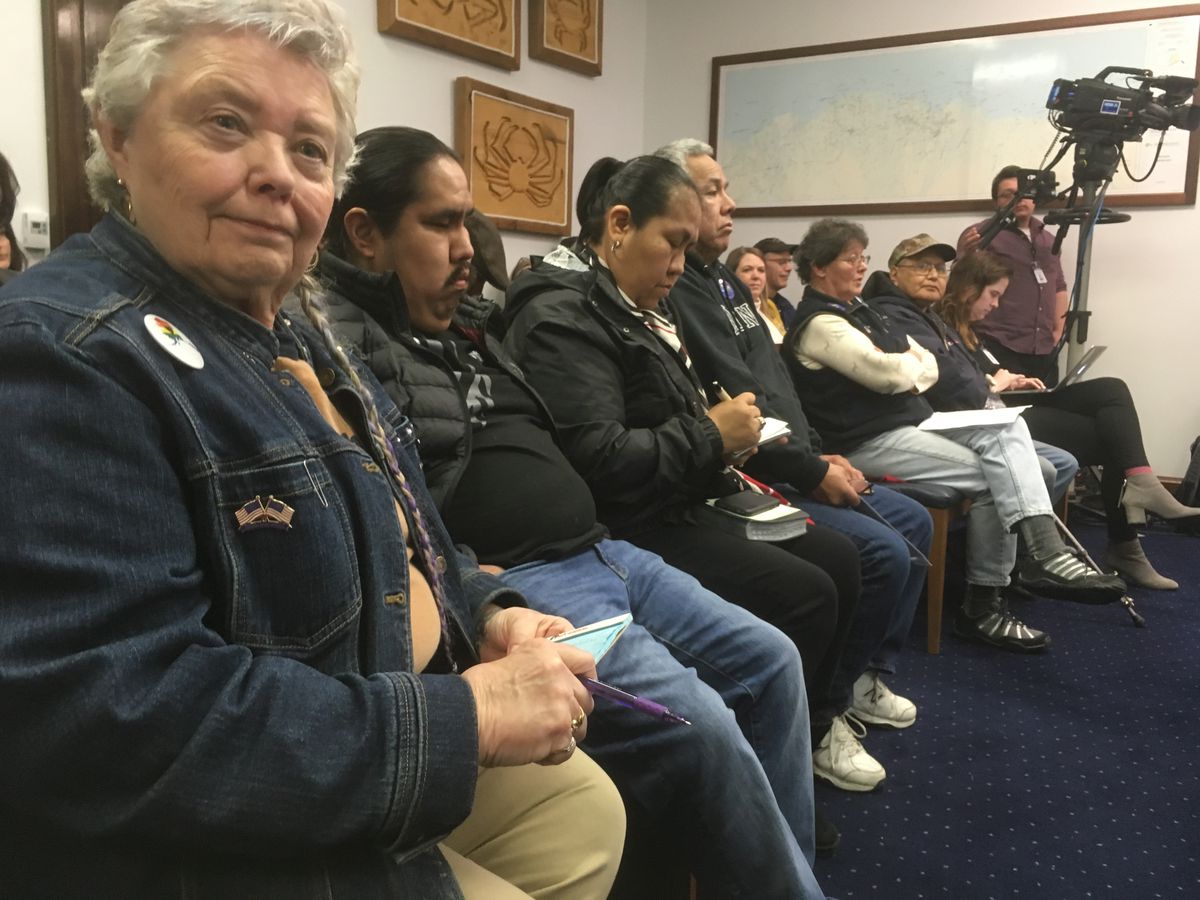 Members of the public wait to testify in favor of increased ferry funding during a meeting of the House Transportation Committee on Tuesday in the Alaska Capitol. (James Brooks / ADN)

Members of the public wait to testify in favor of increased ferry funding during a meeting of the House Transportation Committee on Tuesday in the Alaska Capitol. (James Brooks / ADN)

JUNEAU — Supported by a record-high level of public testimony, members of the Alaska Legislature are considering alternatives to Gov. Mike Dunleavy’s proposed Oct. 1 shutdown of the Alaska Marine Highway System.

In a Tuesday meeting of the House budget subcommittee for the Alaska Department of Transportation and Public Facilities, lawmakers heard three alternative proposals that could keep the ferry system running past September. In public testimony within the House Transportation Committee afterward, coastal residents urged lawmakers to accept one of those alternatives.

“I tell you, I’m almost beside myself with what’s going on,” said Frank Kelty, mayor of Unalaska. “The marine highway system in Southwest Alaska is our road system, and I don’t see why our communities should be treated any differently than communities on the road system.”

According to figures provided by Tim Powers, director of teleconferencing for the state’s legislative information offices, Kelty was among a record 294 people who participated in Tuesday afternoon’s session of public testimony, signing up to speak in person or by telephone.

The barrage of public testimony came after Dunleavy suggested extensive budget cuts and other measures to pay a Permanent Fund dividend using the traditional formula while erasing a $1.6 billion deficit without new taxes or spending from the Constitutional Budget Reserve.

Among his proposed cuts is a $98 million reduction in the $143 million budget of the state ferry system, according to figures presented by DOT. (The numbers differ slightly from those calculated by the nonpartisan Legislative Finance Division.)

If the governor’s cuts are accepted by the Legislature for the fiscal year that starts July 1, the state cannot afford to run its full ferry fleet past the end of August. In September, only four ships would run. Starting in October, none would run. All 11 ships in the fleet, plus the two new Alaska-class ships, would be tied up.

“This budget will provide enough to have some minimal vessel staff and shoreside staff to keep the ships safe,” said Matt McLaren, development manager for the ferry system.

The ferry system served 251,099 passengers in the fiscal year that ended June 30. Most of the ferry system’s runs don’t make money, and the ferry service has raised rates every year since 2015,

Siroky, McLaren and Amanda Holland of the Office of Management and Budget presented varying options along those lines. Each scenario offers service past Oct. 1, but each sacrifices something. In the first scenario, which cuts about $50 million from the current budget, the state would end service to the Southeast towns of Angoon, Tenakee and Pelican, and service to the Canadian port of Prince Rupert would end after Sept. 30.

In the second scenario, the three dropped Southeast towns would receive service, but there would be a $45 million budget cut and Prince Rupert service would end. In the third scenario, the state would provide $1 of subsidy for every dollar taken in farebox revenue, and the ferry system would maximize its profitable runs. That would result in a cut of $40 million and an end to Prince Rupert service, but all Alaska ports would be served.

In the second and third scenarios, sailings are cut by 10 percent. In the first scenario, service is cut by about 17 percent.

Rep. Louise Stutes, R-Kodiak and chairwoman of the transportation committee, started public testimony by allowing two minutes of testimony per person but, after seeing the crowd, cut that to one minute.

Every person who gave public testimony in the afternoon session was in favor of funding the ferry system above the amount proposed by the governor, though some speakers said they were willing to accept smaller cuts.

Denise May, a resident of the Kodiak archipelago village of Port Lions, said she understands why the governor proposed the cuts that he did, but the math doesn’t work for her.

“You can give me a larger dividend. However, it’s going to cost me more to get groceries and other services for my community, so I’m going to pay more in the long run,” she said.

Harvey Brandt of Sitka said he worries about the effects on the coastal economy.

“It’s bizarre. Every economist in the world, even with a simple bachelor’s degree, knows you have to have labor, capital and a good transportation system to run an economy,” he said.

Mike Sirofchuck of Kodiak said he thinks that economic damage would spread. How many people who shop in Anchorage will stop because they can’t drive there?

Some lawmakers have suggested that private enterprise may be able to fill the gap left by the ferry system. Not so, implied Dennis Watson, general manager of the Interisland Ferry Authority, the corporation that operates a ferry between Prince of Wales Island and Ketchikan.

Many testifiers said funding for state ferries is a matter of equity. The governor has not proposed significant cuts to funding for surface highways.

“No other highway is expected to make a profit,” said Gayle Eastwood of Petersburg.

Loretto Jones of Wrangell was even more direct: “How about we start putting toll booths up north?”