Banned from the Capitol, Alaska lobbyists contend with pandemic predicament 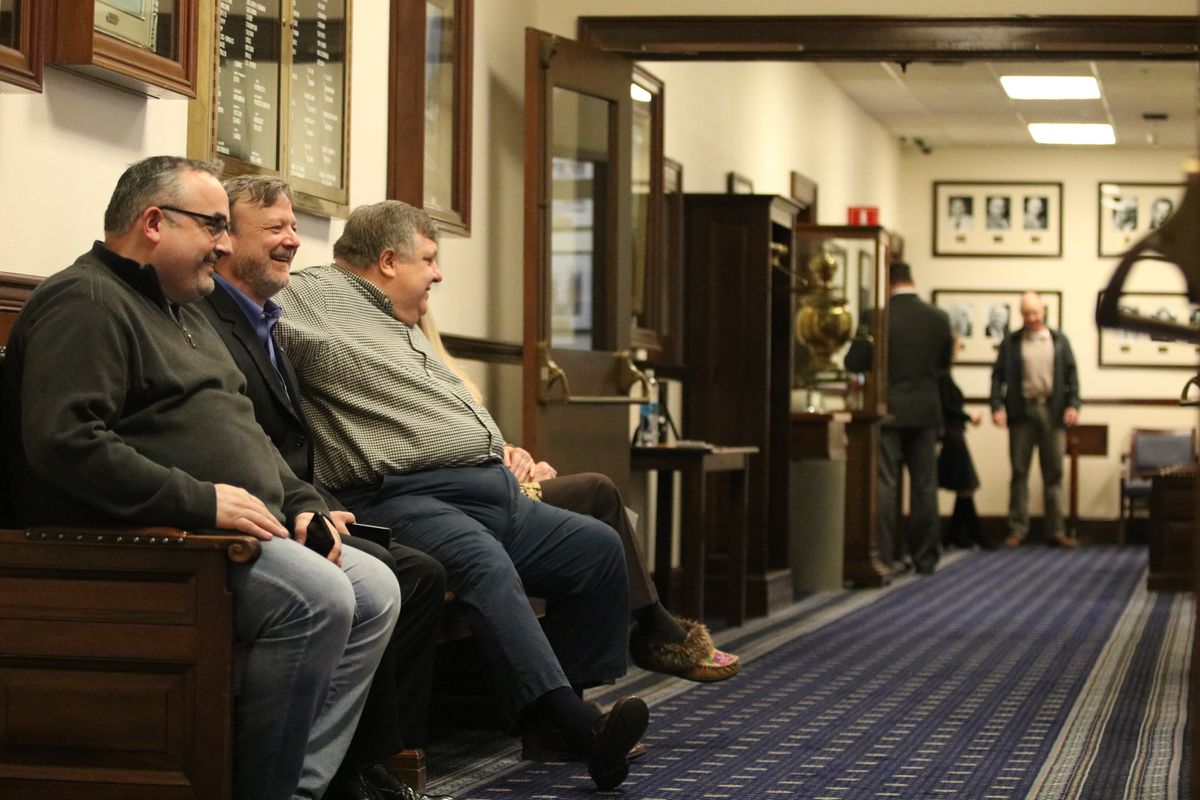 The Alaska Legislature opened its session Tuesday amid a deadly pandemic and a huge budget shortfall.

But if you think lawmakers’ job is tough, consider, for a moment, the plight of the lobbyist. They’re paid for access to and intelligence on what’s happening in the Capitol — but for now, they’re banned from the building.

They’re also contending with a disorganized power structure. It’s been more than two months since the election, but the state Senate only formed a ruling majority on Tuesday. The House still has no one in charge.

Lobbyists say the power vacuum and their loss of in-person access to the Capitol will be an undeniable obstacle as they seek to influence policy and provide lawmakers information from businesses, local governments, organized labor and other interests.

But they plan to make do with Zoom meetings, text messages, and even socially distant office rearrangements they hope could entice lawmakers into taking meetings outside the Capitol.

“It’s more difficult to build a relationship over the telephone or on a Zoom call,” said Wendy Chamberlain, a veteran Juneau lobbyist with clients in health care, seafood and municipal government. “But we still feel confident.”

Chamberlain’s lobbying firm has an office next door to the Capitol, in the basement of health food store Rainbow Foods. It has a conference room that is big enough for socially distanced meetings, she said, if lawmakers are comfortable paying an in-person visit. Otherwise, she’ll communicate by phone, email and Zoom.

Alaska lawmakers and staff are being subjected to regular COVID-19 testing as a condition of entering the Capitol. But the public — lobbyists included — is barred from the building.

Kodiak Republican Sen. Gary Stevens, who runs the committee charged with setting legislative rules, said some lobbyists pushed for an exemption, perhaps by paying for their own testing, but lawmakers declined to grant one.

“They have a job to do, and they have clients,” Stevens said in a phone interview. “But we just thought that we should not be allowing lobbyists in the building if we don’t allow the general public in the building.”

Those rules are forcing lobbyists to find other ways to connect with legislators.

Down the street from the Capitol, Frank Bickford, whose clients include Wal-Mart, Verizon and the Dimond Center, is working behind a desk with a recently installed plexiglass shield, which he said will also allow him to meet with lawmakers and their aides in his own space.

“With the mask and the plexiglass and the sanitizer stuff, I think we’re good,” he said. “I don’t want to have more than two people in the office at a time, that’s for sure.”

Other lobbyists, including veteran John Bitney, have office space in a building across the street from the Capitol where lawmakers and aides are getting their COVID-19 tests — a point that Juneau Democratic Sen. Jesse Kiehl noted in a tweet earlier this month.

Bitney’s office is directly adjacent to the testing site, which makes him “the best-positioned lobbyist” in the Legislature this year, Kiehl quipped.

“Every legislator and staffer will come to him every three to four days this session,” Kiehl said, adding: “Downside for John Bitney: 100% of us will be tetchy because someone is about to stick a swab up our noses.”

.@JohnBitney is the best-positioned lobbyist at the #akleg this year. The door to the right is the COVID testing contractor. The one at center is John's office. Every legislator and staffer will come to *him* every 3-4 days this session. pic.twitter.com/3mCJ3T9x5n

For many lobbyists, in-person interactions are crucial — grabbing a quick face-to-face chat with an aide on their way out of an office, or picking up on a legislator’s grimace or sigh in a committee hearing. Getting a lawmaker’s attention by text can also be more challenging than stopping them in a hallway.

“I hope they’ll be reading my texts,” quipped Jordan Marshall, who lobbies for tribal health groups, cities and boroughs.

Unlike some of his colleagues, Marshall said his style is less reliant on informal interaction: He tries to keep his exchanges with legislators precise and specific.

He said the lack of Capitol access is an undeniable loss, but he also pointed out the Alaska Legislature has good technologies that allow electronic engagement. For now, he’ll be sticking to socially distant forms of communication, he added.

“As much as I’d like to continue business as normal, I think until it’s my turn to get vaccinated, and until the vast majority of folks who want a vaccination can get one, it just feels uncomfortable to me to try to create face-to-face opportunities,” he said.

One particularly acute challenge, lobbyists say, has been forming relationships with newly elected lawmakers amid a pandemic. Typically, Chamberlain said, she would introduce herself to all the freshmen, maybe hand out business cards or meet for coffee, and “pretty soon, by a month-and-a-half, you know one another.”

“That’s not there this year,” she said.

Calvin Schrage is a newly elected independent representative from the Anchorage Hillside. He said he’s ducked lobbyists’ invitations for coffee because he lives with Fairbanks Democratic Rep. Grier Hopkins, whose wife is pregnant.

Instead, Schrage said he’s taking meetings over Zoom and other online platforms.

“It’s a little different,” Schrage said. “But at the same time, we are still finding ways to get in touch, to have those conversations. They’ve been productive despite being online — just, maybe not as friendly and personable as they might be in person.”

Another consideration for lobbyists is whether they want to take the risk of meeting with state legislators who have resisted pandemic precautions like mask-wearing, among them Eagle River Republican Sen. Lora Reinbold.

On top of all that, there’s the fact that, until Tuesday morning, neither the House nor Senate had been able to organize into ruling caucuses.

That meant lobbyists still didn’t know who would be in charge of committees or handling specific bills. While the Senate announced the formation of a Republican majority Tuesday morning, the state House remains divided.

“There’s so much uncertainty,” Marshall said.

Heidi Drygas, a former state labor commissioner who lobbies for organized labor groups, said she’s trying to set realistic expectations for the year, knowing the pandemic isn’t going to leave the Legislature with a lot of room for anything but the basics.

“I don’t hear anyone who says, ‘I think we’re going to get a lot done this session,’” Drygas said. “Nobody is trying to tackle big, lofty legislation before they gavel out.”

Originally published by Alaska Public Media and republished with permission.