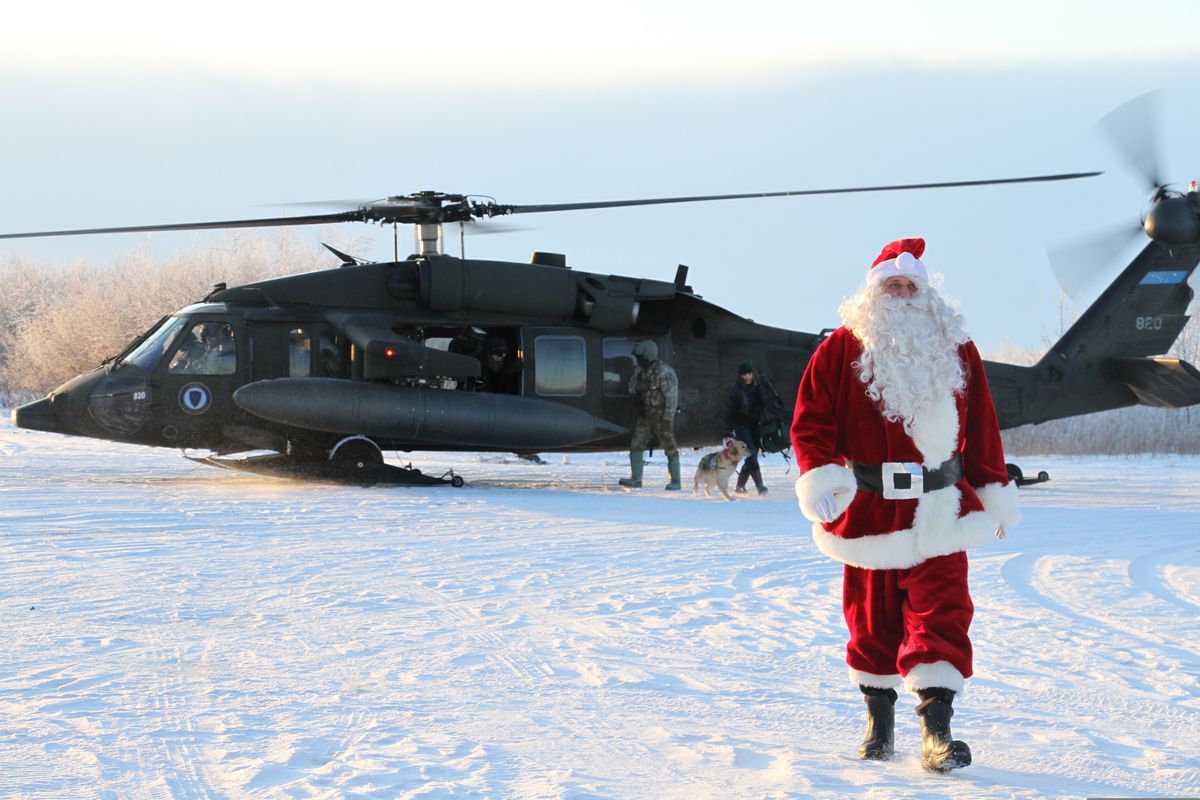 This Dec. 3, 2019 photo shows Santa Claus arriving in Napakiak on an Alaska National Guard UH-60 Black Hawk helicopter. The Guard brought its Operation Santa Claus to the Western Alaska community, which is being severely eroded by the nearby Kuskokwim River. (AP Photo/Mark Thiessen)

This Dec. 3, 2019 photo shows Santa Claus arriving in Napakiak on an Alaska National Guard UH-60 Black Hawk helicopter. The Guard brought its Operation Santa Claus to the Western Alaska community, which is being severely eroded by the nearby Kuskokwim River. (AP Photo/Mark Thiessen)

"Napakiak is happy today," she proclaimed to principal Sally Benedict.

That’s a rare emotion of late for the 300 or so residents of this Western Alaska community. “We’re falling into the Kuskokwim River,” Benedict explains, because of erosion that is forcing everyone to move their town farther inland.

But for one day earlier this month, the Alaska National Guard gave folks a reason to smile, thanks to its "Operation Santa Claus" program, which featured the jolly old elf himself distributing gifts to the children.

"This lightens the load," said Benedict, a former Detroit educator who arrived last summer. "This is sunshine for us, it's a brightening of our day."

Now in its 63rd year, Operation Santa Claus has become a rarity among National Guard units. Defense officials have shut down the program everywhere but Alaska, where the mission survives because the state is so large and some communities are so remote.

The program started in 1956 when the residents of St. Mary’s, Alaska, had no money to buy children Christmas presents after flooding severely impacted hunting and fishing. Since then, Guard members try to visit at least two rural communities a year, delivering Christmas gifts and other needed supplies.

They've been to remote burgs with names like Koyukuk, Savoonga, Illiamna, Kwethluk and Tuntuliak. The visit to Napakiak involved two aircraft: a 400-mile (644-kilometer) trip in a small airplane from Anchorage, then a five-minute helicopter ride to the village.

"We love this, we truly love coming here," said Maj. Gen. Torrence Saxe, the adjutant general of the Alaska National Guard who found himself topping ice cream sundaes with cherries for the revelers in Napakiak. "This is a proud tradition."

The Guard isn't the only Santa's helper in the nation's largest state.

The Salvation Army is celebrating its 50th year of helping the Guard, collecting gifts, book bags and other items to be distributed. Major corporate sponsors like Costco and Walmart contribute to the program, and Rich Owens for years has provided the ice cream from his Tastee Freez restaurant in Anchorage.

"It's a labor of love," said John Brackenbury, the Alaska divisional commander of The Salvation Army.

Erosion caused by the Kuskokwim, a 700-mile-long river that becomes an ice highway for travelers in the winter, has been an ongoing problem in Napakiak, but the pace has accelerated in the past few years.

This year alone, erosion has been responsible for more than 100 feet of lost shoreline.

In September, the village school’s 10 fuel tanks were relocated by barge across the river to the nearby town of Bethel after being threatened by aggressive riverbank erosion.

Erosion also threatens the school, which sits less than 200 feet feet from the river. The Lower Kuskokwim School District needs to move the school, but local officials say finding money for a new school has been challenging.

River erosion also threatened Napakiak's firehouse and city garage, so those structures were moved in July.

The village also has applied for permits to relocate the boat harbor, which was destroyed by storms in May. The five-year plan, Benedict said, is to move everyone to the other side of an airstrip.

But at least for one day, the residents of Napakiak didn't have to worry about the erosion creeping ever closer to their homes, and instead could focus on the smiles or even smudges of chocolate from the ice cream sundaes on their children's faces.

Marcus Billy thought he received a basketball, but he became a little confused when he saw it was lime green and not orange. It was only when all the wrapping paper was off that he was sure. When asked if he was happy with that, he said, "Yeah!" before running off to play.