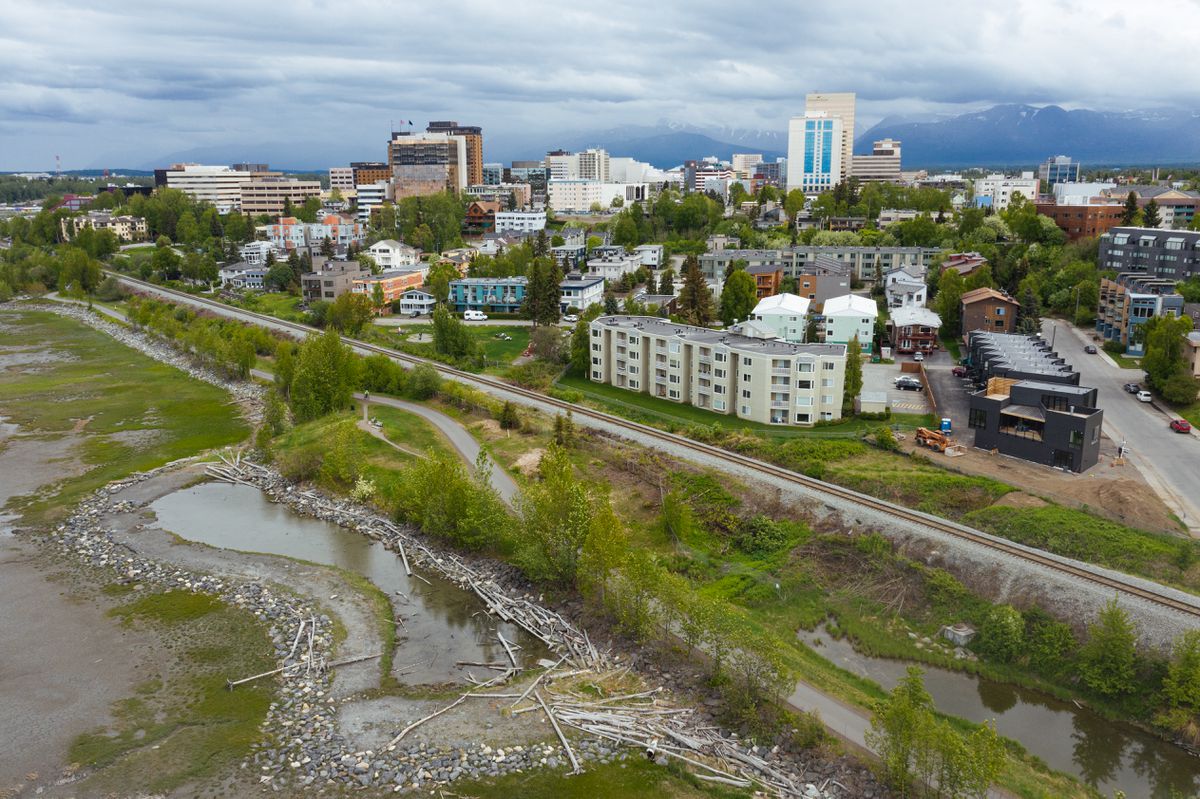 Aerial photograph of the Bootlegger Cove neighborhood in Anchorage, May 31, 2020 (Photo by Kerry Tasker)

Aerial photograph of the Bootlegger Cove neighborhood in Anchorage, May 31, 2020 (Photo by Kerry Tasker)

Part of a continuing weekly series on local history by historian David Reamer. Have a question about Anchorage history or an idea for a future article? Go to the form at the bottom of this story.

At least three Anchorage neighborhood names originate from criminals. Spenard is named for the bootlegger and squatter Joe Spenard. However colorful, Spenard was a man who didn’t let little things like societal niceties or laws get in the way of making money. Russian Jack is named for Russian Jack Marchin, aka Jacob Marunenko, another bootlegger and a convicted murderer to boot. And Bootlegger Cove, of course, more generally takes its name from the smuggling of alcohol into town.

The most notorious incident related to this aspect of Bootlegger Cove’s past is the 1925 arrest of Ed Olson, aka Ed Olsen, aka Hartvig Olsen. Possibly Swedish, possibly Norwegian, Olson’s real name was Hartwig (or Hartvig) Olsen Kaalstad, and he was also known by the Americanized version, Hart Colstad. This Ed Olson is no relation to the mining pioneer Ed Olson, birth name Edvard Olsson, who first moved to Alaska in 1931.

To set the stage, the Alaska Bone Dry Law took effect on Jan. 1, 1918, prohibiting the importing, manufacture or selling of alcohol. This was two years before the rest of the nation entered Prohibition following the ratification of the 18th Amendment. The consumption of alcohol remained legal, and as could be reasonably expected, Alaskans did not quit drinking. Alcohol had also been prohibited in Alaska from 1868 to 1899, not that you would have known it if you visited any frontier town. Instead, drinking in post-1918 Alaska became a more private and rebellious act fueled by illicitly obtained booze.

Marshals and police readily busted stills, broke barrels of moonshine and arrested bootleggers, but Alaskans of all classes, wealth and distinction drank. In Anchorage, certain establishments acted as fronts for alcohol, especially cigar stores and pool halls. Russian Jack Marchin notably managed a pool hall in town before operating stills outside of town. And not coincidentally, Ed Olson ran an Anchorage cigar store for a while. Essentially, if caught smuggling or selling alcohol, you deserved punishment for either acting too publicly or insufficiently bribing law enforcement.

Some of the bootlegged alcohol in Anchorage was imported from Canada and the Lower 48. Still, much of it was moonshine distilled in Alaska, also known locally as hoochinoo, squirrel whiskey and white mule. Modern-day Bootlegger Cove — west of downtown Anchorage — down to the mouth of Chester Creek was the prime place for local deliveries.

Since he liked to change his name, it’s not clear when Olson arrived in Alaska. Perhaps he made his way north for one of the gold strikes. Or perhaps he arrived as late as the founding of Anchorage for the railroad work. Indeed, apart from bootlegging, he also worked occasionally as a prospector, laborer and contractor.

In Anchorage, marshals and the police had long suspected Olson for multiple illegal acts. In 1923, he was arrested for disturbing the peace. Details regarding his violation are unknown, but he was sentenced to a month in jail and fined $100, $1,500 in 2020. Around town, Olson was known as the “phantom Swede” and “king of the shiners,” per the Anchorage Daily Times. Deputy U.S. Marshal A.F. Hoffman declared in 1925, “We have been after this fellow Olson for the last five years.”

Early the morning of June 20, 1925, the marshals received a tip that Olson had stashed a liquor shipment in the woods around Chester Creek. The marshals and Anchorage Police Chief Lee Powless prepared to launch their raid. At the same time, Olson and his bootlegging compatriots entered town and were warned of the marshals’ movements. The next few hours were part farce, part race as Olson, his partners and the marshals all journeyed south on different paths, each group racing to reach the cache of moonshine first. No group sighted another, and all returned to town empty-handed.

Knowing their prey was rightfully skittish, the marshals laid a trap. Most of the marshals returned home and busied themselves in the appearance of having abandoned the hunt, but one man later snuck back into the woods to keep a covert watch. He was subsequently relieved by other peace officers. On the 22nd, Olson and crew finally returned for their moonshine, where after a short chase, three men, including Olson, were arrested. One hundred and twenty gallons of “while mule likar” were seized.

Olson was sentenced to one year at the Anchorage jail and $1,000 in fines, about $15,000 in 2020 dollars. He served his year but was unable to pay the fine. After serving an additional 14 months and four days for nonpayment of the fines, his remaining debt was remitted, and he was released in October 1927.

The first known use of “Bootlegger’s Cove” to describe an area of Anchorage is from 1933, coincidentally the same year the Alaska Bone Dry Act and the 18th Amendment were repealed, ending Prohibition in Alaska and nationally. After serving his time, Olson drifted around the territory, continuously engaged in schemes of varying legality. In November 1936, his body was discovered on the trail between Takotna and McGrath, northeast of Iditarod. Then around 55 years old, he grew tired on the trail and fell asleep, freezing and dying without waking up.