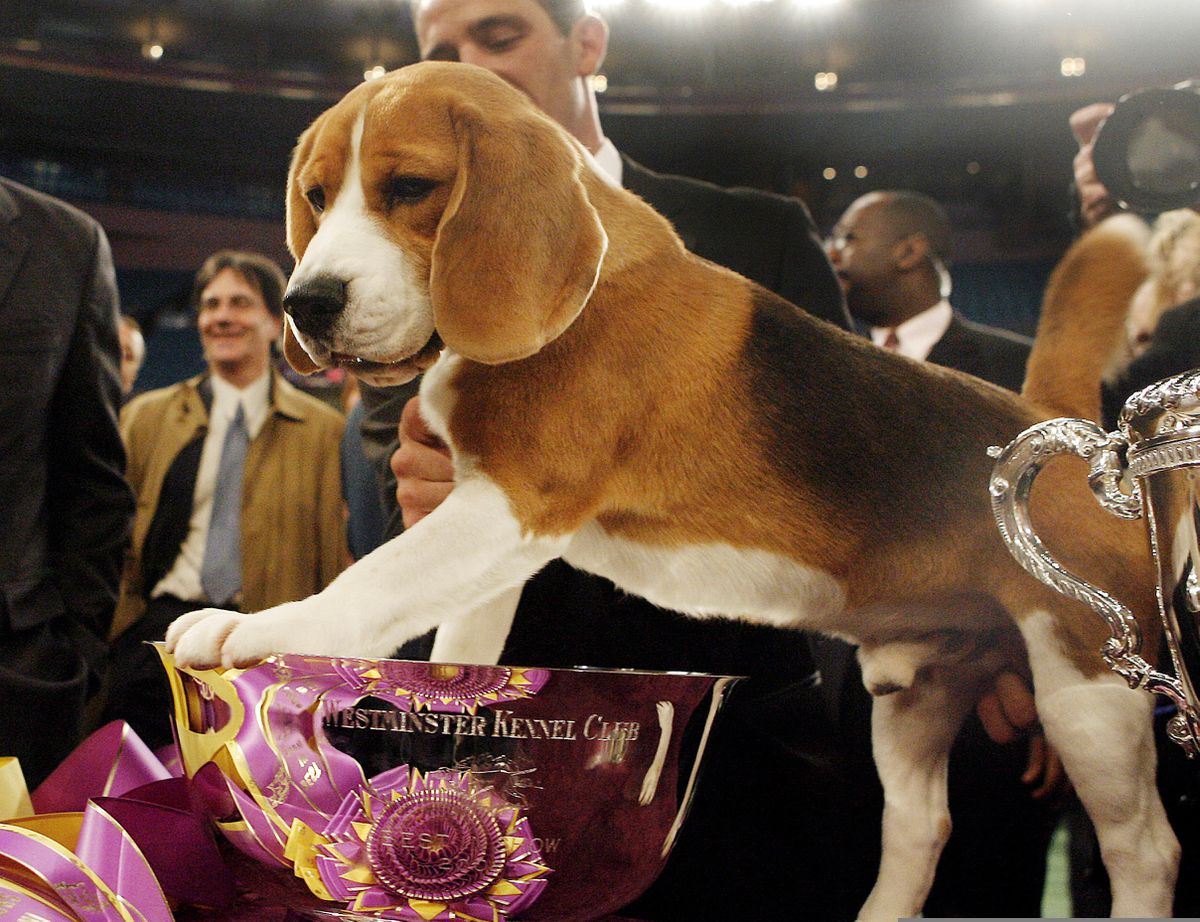 FILE - In this Feb. 12, 2008, file photo, Uno, a 15-inch beagle, poses with his trophy after winning Best in Show at the 132nd Westminster Kennel Club Dog Show at Madison Square Garden in New York. Beagles had always been in the Westminster doghouse. No matter how cute, poor ol’ Snoopy had never, ever won the grand prize. Bow-wow bummer. (AP Photo/Jason DeCrow, File)

FILE - In this Feb. 12, 2008, file photo, Uno, a 15-inch beagle, poses with his trophy after winning Best in Show at the 132nd Westminster Kennel Club Dog Show at Madison Square Garden in New York. Beagles had always been in the Westminster doghouse. No matter how cute, poor ol’ Snoopy had never, ever won the grand prize. Bow-wow bummer. (AP Photo/Jason DeCrow, File)

NEW YORK — To every sport, there’s a season, a spot on the calendar that fans mark for the big event. World Series, October. College hoops, March. Indy 500, Memorial Day.

For dog owners, it’s right around Valentine’s Day. That’s when they normally cuddle up on the couch with their precious pooch to watch the Super Bowl of Dogs -- the Westminster Kennel Club show.

This year, they’ll have to wait for the coveted best in show. Because of coronavirus concerns, the competition was moved from Madison Square Garden this weekend to mid-June at an outdoor estate about 25 miles north of New York City.

Beagles had always been in the Westminster doghouse. No matter how cute, poor ol’ Snoopy had never, ever won the grand prize. Bow-wow bummer.

That changed in 2008 when perhaps the greatest show dog of all time showed up. A tri-colored package of personality-plus, Uno quickly bayed his way to fan favorite.

A sold-out Garden crowd chanted his name as judge J. Donald Jones studied the seven finalists for nearly three minutes, mulling over his pick for best in show. They say there’s no cheering in the press box, but having been raised in Maryland with beagles -- Charlie, Gatsby, Sam and Jake -- I looked at Ginger and prayed this was our moment.

When Jones said, “May I have the beagle,” the place went bonkers.

This little, merry hound enjoyed a terrific life. He visited President George W. Bush at the White House, rode in a float at the Macy’s Thanksgiving Day Parade and brought out the first ball at Busch Stadium and Miller Park.

Uno lived till 13, spending his last years on a ranch in Texas and playing with his buddy, a neighbor’s potbellied pig.

Sometimes the dog that everybody’s barking about isn’t the best in show. Like, Dario the Leonberger.

Winning wasn’t on this big guy’s mind when he romped around the ring in the 2016 working group competition. Naw, he only wanted to gnaw at his handler’s pocket, trying to scarf up a treat.

Doggedly determined, the 2 1/2-year-old eating machine kept nipping at Sam Mammano’s gray suit, hoping to grab some loose rebounds. A dog just being a dog ... and the crowd went crazy, hollering with every step and every bite.

He didn’t win, that went CJ the German shorthaired pointer. But Dario earned a place in dogdom lore forever.

We rushed from our seats on the floor to catch up with Mammano backstage, right after he left the ring. He was a little disappointed, but also could see the charm.

“Good comic relief,” he said. “He’s a young, silly dog and was just having fun.”

Most years, a dog like Appollo wouldn’t get close to the green carpet at the Garden. But the show in 2002 was no ordinary show.

With New York City still in shock from the 9/11 terrorist attacks, 20 search and rescue dogs were honored for their tireless work at the World Trade Center and Pentagon.

At 10, Appollo the German shepherd was getting a bit gray in the muzzle, his teeth were yellowing. He didn’t look like the 2,500 perfectly primped pooches around him.

Yet there was hardly a dry eye as the 10,000 spectators stood and cheered for the German shepherds, retrievers and their partners, an ovation usually reserved for the star athletes who played in the arena. It was hard not to be swept up in the emotion.

A spotlight featured them as they walked one by one into the center ring and actress Glenn Close sang “God Bless America” during the 15-minute ceremony.

Not the usual reception for this group.

Each year, there are the favorites. J.R. the bichon frise, Mick the Kerry blue terrier, Banana Joe the affenpinscher. Wire fox terriers and poodles always seem to take home the hallowed silver bowl.

Then there was Stump.

With floppy ears and a slow roll, the golden-red Sussex spaniel didn’t make our early list of potential champions in 2009. How could he? Retired from the ring for five years, it was just five days before the show when handler Scott Sommer thought Stump might like to take one final walk at the Garden.

What a walk! At 10 -- that’s almost 70 in human years -- Stump became the oldest Westminster winner ever.

He was in good company among unlikely top dogs over the years. Rufus the colored bull terrier had a football-shaped noggin and won by a head. Hickory the Scottish deerhound was a rare champion. Big, barkin’ Josh the Newfoundland slobbered around the ring, then nearly knocked over Ginger in the winner’s circle.

And Stump. That old dog sure taught the young pups some new tricks.

Seeing an Azawakh at the Garden was unusual. Loosely called an African greyhound, they made their Westminster debut last year.

Seeing the woman cheering them on was even more eye-catching. Dressed in bright pink and wearing a colorful hijab, Aliya Taylor realized she stood out.

The retired Philadelphia police officer is among the few Muslims in the dog show world.

“Our sport welcomes people from all walks of life,” said Gail Miller Bisher, the television host of the event. “That’s our common bond, dogs.”

Hiram Stewart made history in 2003 when he guided Les the Pekingese into the final best-in-show ring. It had been three decades since an African American handler made it that far.

In a competition that can include a Norwegian elkhound, Australian shepherd and Chinese shar-pei, the people come from all over the world, too. Born in Mexico, Gabriel Rangel is among the most successful handlers in history.

He’s won best in show three times at Westminster. In 2014, he guided Sky the wire fox terrier to victory. One of the perks was a walk-on part at the Tony Award-winning Broadway musical “Kinky Boots.”

Ginger had the pleasure of dog-sitting Sky in a third-floor dressing room when he wasn’t on stage. Almost every actor dropped by during the show to pet him and pose for a picture.

Having never tended such a prized pooch, Ginger wondered what to do if the dog got hungry. Surely some special high-performance, ultra-healthy food was in order, right?