With local food trending, Alaska farmers markets are springing up in some surprising places 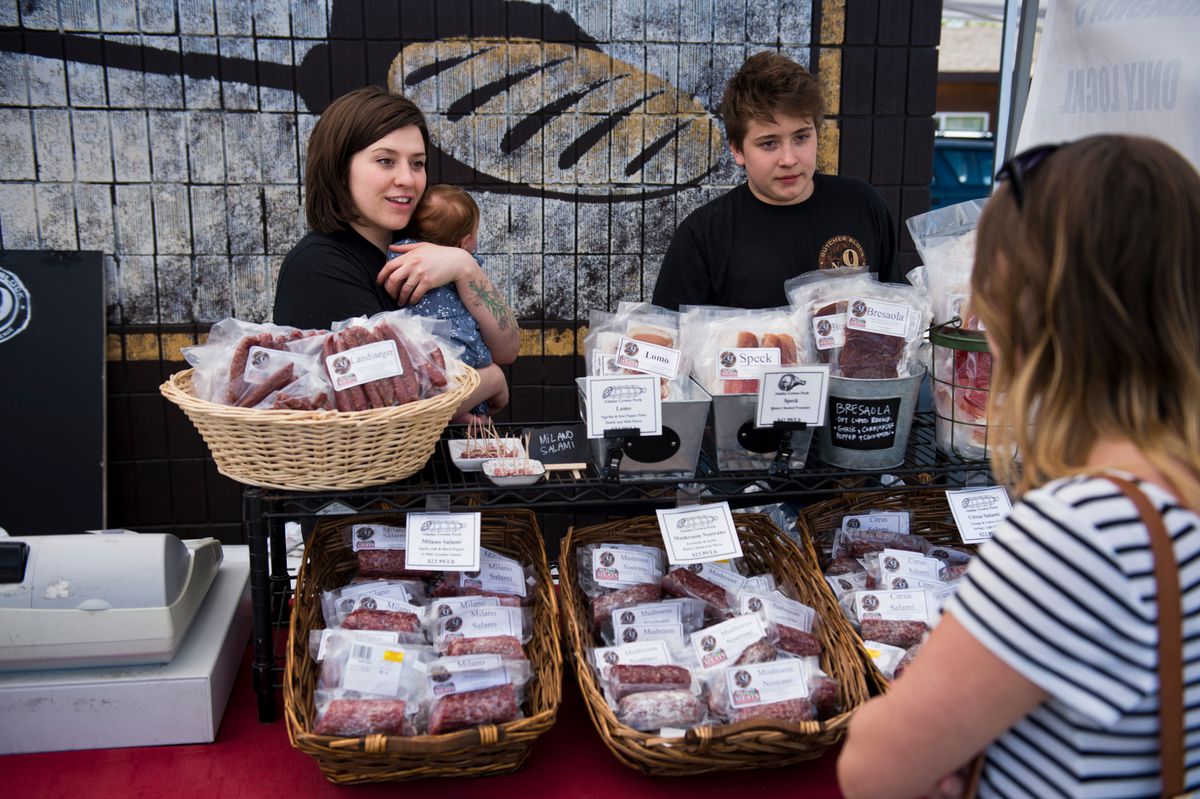 Colsie Biswell holds 6-week-old Indie Biswell and talks with a customer of the Butcher Block No. 9 stand on May 31. Fire Island is hosting a farmers market in their lot in Airport Heights on Wednesdays from 3 to 7 p.m. this summer. (Marc Lester / Alaska Dispatch News)

Colsie Biswell holds 6-week-old Indie Biswell and talks with a customer of the Butcher Block No. 9 stand on May 31. Fire Island is hosting a farmers market in their lot in Airport Heights on Wednesdays from 3 to 7 p.m. this summer. (Marc Lester / Alaska Dispatch News)

A host of tiny farmers markets are popping up around Anchorage, capitalizing on a trend that's been on the rise for years.

They're inside and outside, in community parks and private businesses, in an Airport Heights parking lot and a quiet downtown mall. One is even held at the same time across the street from another one. At least three new markets have opened in Anchorage this season.

The state Division of Agriculture keeps track of the number of markets in an informal way. There were 14 across the state in 2005, according to Johanna Herron, the state's market access and food safety manager. Now there are at least 42, and maybe more. While the division produces a list for the public, it's up to markets to reach out and get on the list.

Herron said some fluctuation has occurred, with some markets closing as others have opened, but mostly it's been a steady rise.

"I think it's a number of things," she said about the increase, "including a heightened awareness of needing to know about where our food comes from."

He said the new markets are a result of businesses taking advantage of growing interest in local food. Clark, who started selling at the Downtown Market and Festival in 2000, said he's noticed a shift to smaller markets serving specific niches.

"It's all part of a growth pattern in being a small business and being an entrepreneur," he said.

Fire Island Rustic Bakeshop started hosting its first farmers market last week. The market is held in the parking lot of the Airport Heights bakery every Wednesday from 3 to 7 p.m.

Airport Heights bakery manager Jason Croft said they started the market as a way of reaching out more in the community. The first week saw a range of food vendors, from ice cream to pasta and charcuterie. Vegetables will be available later in the growing season. He's planning to host about a dozen vendors each week.

Croft said they decided to host the market on Wednesday despite competition from The Mall at Sears' indoor market. It's the slowest day of the week for the bakeshop and the idea is to draw people into the location and serve as a community gathering space, complete with live music.

He said the Fire Island market is designed to be small and easy to walk to, with the hope that families in the neighborhood stop by for something to add to their weeknight dinner.

"Just (to have) people walking down the street to get groceries instead of fighting traffic would be a real reward for us," Croft said.

Gail Jones started the Fourth Avenue Indoor Market at the beginning of May. The market has produce and music like other markets, Jones said, but is more focused on other vendors, including crafts and direct-sale vendors like LuLaRoe clothing.

The Friday-Saturday-Sunday market is indoors from 10 a.m. to 6 p.m. and right across the street from the long-running Anchorage Market and Festival on Third Avenue.

But Jones said the two are not in competition. Jones owns Jonesers Handmade Nectars and has booths at both locations. She said some vendors don't want to operate outside, either because their products can't get wet or they don't want to spend the morning outside when the weather is poor.

She also plans to host the market inside the 10,000-square-foot space all year, not just in the summer months.

"It's just a different opportunity to revitalize and bring the market together," she said.