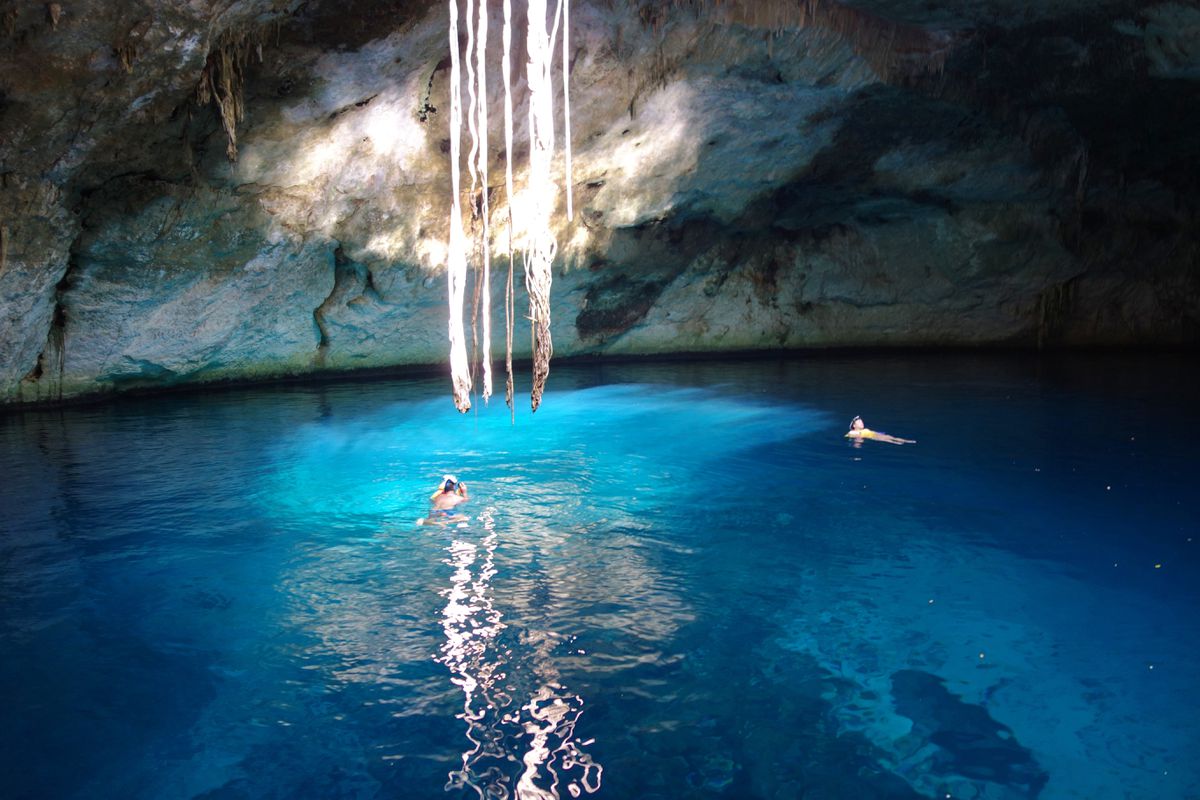 Research is a key ingredient for any trip. It’s one thing to get a good deal on tickets. But then you need a place to stay and an overview of what to do and where to find the best coffee.

On a recent trip to Merida, on Mexico’s Yucatan Peninsula, we actually brought our own coffee (from Kaladi Brothers). But the research didn’t quite add up to the real experience: a mash-up of European colonization, the ruins of an ancient civilization and a massive meteorite that made some beautiful swimming holes.

To get a quick start on the history of the region, take the free walking tour that leaves each weekday morning at 10 a.m from Santa Lucia Park. It’s a two-hour stroll through the historic central district. Our guide, Ivan, grew up in Merida and was a good resource on the economy, the politics, the architecture and history of the area. One stop is the Cathedral of San Ildefonso. Construction of the cathedral started in 1562, making it one of the oldest cathedrals in the Americas. The city itself was founded by Spanish invaders in 1542, well before settlements at Jamestown or Plymouth Rock.

By the time the Spanish arrived around 1518, the Mayan empire was in decline in the Yucatan. Although there still was a large population of Mayans in the area, the giant Mayan pyramids were not uncovered until 1841.

It’s possible to rent a car and strike out on your own to see the pyramids. We opted for a guide, Franck Taleghani, who we found through Airbnb.

Rather than going to the popular, often-crowded pyramids at Chichen Itza, Franck opted for a more accessible group of pyramids among the ruins of an ancient city called Mayapan. “You’ll pay 500 pesos to go to Chichen Itza and you can’t even climb up the pyramids,” said Franck. “Here at Mayapan, it’s just 100 pesos (less than $6) and you can climb all over them.”

The highlight of our tour, though, was a trip to go swimming in a couple of the giant blue pools, or cenotes, that are scattered around the Yucatan Peninsula.

The cenotes are a result of a giant, 80-mile-wide meteorite that smashed into the ocean off the northern tip of the peninsula.The crater is more than 100 miles wide. Scientists estimate the rock slammed into the earth 66 million years ago, wiping out the dinosaurs. But the impact also pushed a giant wall of water into the earth, which helped create these unique pools.

The Mayans tapped the cenotes for irrigation — they had no interest in exploring or swimming in them. But when erosion caused more of the roofs over these pools to fall in, modern-day explorers became interested. There are caves that stretch underwater in many directions in some of the pools. Divers love to go exploring, and the water temperature makes for wonderful swimming.

Most of us gingerly walked down the wet stairs to the platform just above water level. But a few of the folks on our tour just jumped off the rim of the cenotes into the water. A couple of them did it more than once.

You can hardly call the access road to these cenotes anything more than a goat track. Franck poked along at about 5 miles per hour, stopping frequently to undo several gates on the route. Nobody seemed to mind, though. It was a great adventure.

Along the way, Franck told the story about how he had met the local folks in the area and had fallen in love with them. The village is off the beaten path. The villagers cook their food over open wood fires. They raise turkeys and pigs for food. Inside the small cinderblock home, everyone sleeps in a hammock instead of on mattresses.

After two back-to-back treks to the cenotes, everyone was hungry. So Franck took us to the home of the family that oversees the cenotes, where they cooked us a meal of tacos and empanadas. There was a mixture of chicken and pork, along with some pickled onions and very spicy hot sauce. The tacos were about 3 to 4 inches across, and they were infused with either beans or chaya (also known as tree spinach), a local food with many nutritional properties. The meal was delicious, served with some hibiscus tea.

This journey to see the cenotes is just one day. The tour only scratches the surface of the natural wonders of the Yucatan, and the history tour of downtown Merida was just two hours. But having good, local guides can help you make the most of your holiday.