Soaking in the Kotzebue vibe 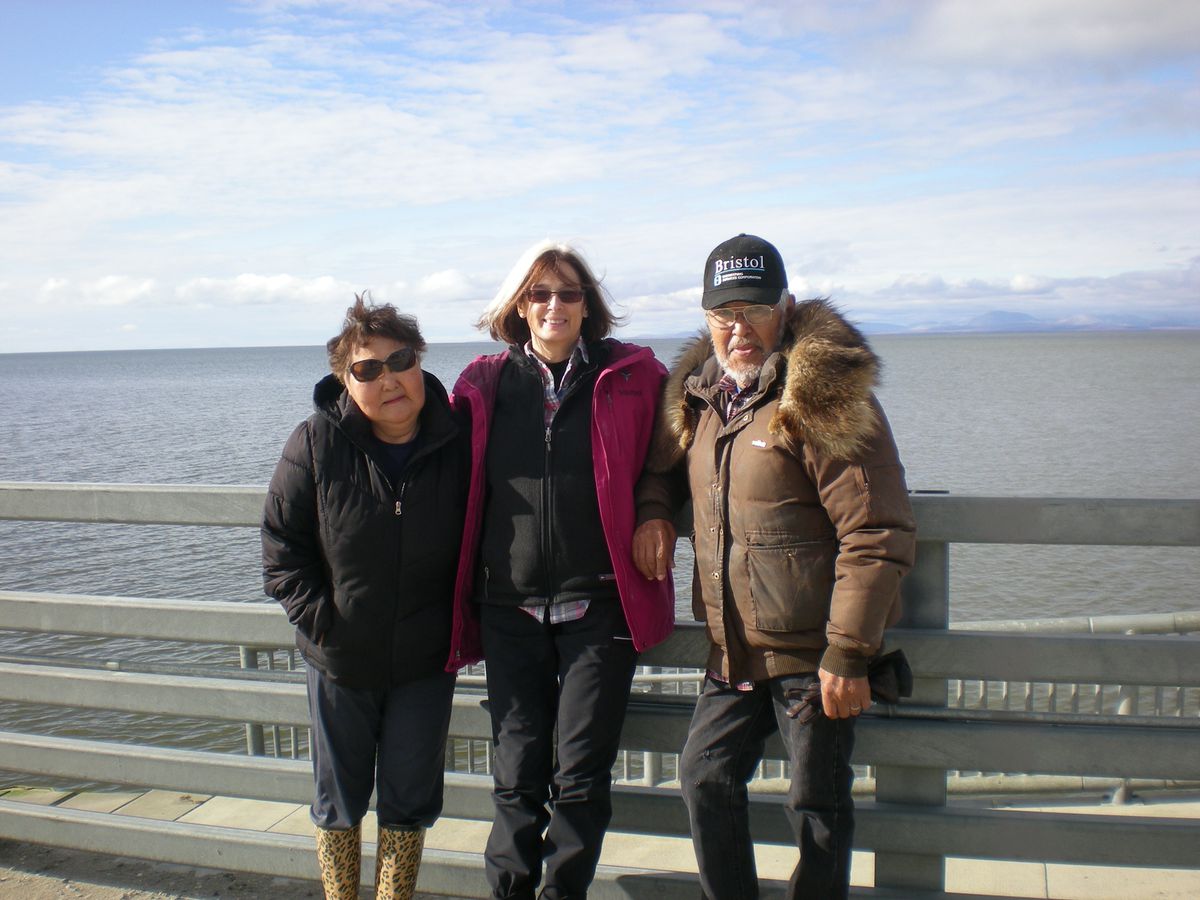 Seventeen years ago, an article appeared in the Anchorage Daily News that would bring two far-flung branches of my family together. When I agreed to work with reporter Rose Cox back in 2000, it was to be a story of doing a family genealogy with my cousin, Judy Travlos. I had no idea the story would lead to the further genealogical finding of another branch of my family connected by my great-grandfather, a Jewish Russian immigrant named Herbert Roy Greenberg.

Shortly after our story was published on April 9, 2000, we were contacted by Billy Bailey, who told us that Greenberg had a Native daughter with a woman named Kathleen Niklik. Our half-great-aunt was born in Keewalik, a tiny village at the mouth of the Keewalik River on the north side of the Seward Peninsula, where my great-grandfather had warehouses to store items for his dry goods store in Candle. She was born May 15, 1905, named Grace Kapook Niklik. Later, her married name was Bailey and she had seven children and adopted Billy to make it eight. They lived in Noatak.

This fact was never revealed to my branch of the family. But through ongoing contacts we came to know our Native cousins better. This summer I decided it was time to travel to Kotzebue and get to know that area and family members there better. I had been to Nome several times, and to the site of Candle, where my father was born in 1916. But I knew of no relatives living in those places.

Lorena, one of Grace's children, and her husband, Whittier Williams, traveled from Kotzebue to Anchorage occasionally and we would meet sometimes for lunch. Lorena would always give me something — an ulu or a kuspuk she made. I was overwhelmed with her thoughtfulness and impressed with her work as a translator and teacher of Inupiaq. Although she was a dozen years older, we clicked.

Finally, I made the trip this Labor Day weekend. Fortunately, I also know LaVonne Hendricks, a public health nurse who has operated a Kotzebue fish camp for many years as a culture camp for new nurses and teachers who came north to work. We did Ikebana flower arranging together in Anchorage and our interests became more entwined as I shared with her my family story. She generously agreed to allow me to stay at her camp.

The Alaska Airlines flight landed in a cloudy, drizzly Kotzebue. A quick cab ride brought me to Lorena and Whittier's place on Front Street, across from the sea. Lorena has been going through some treatments for a serious brain condition and was not feeling well. But it felt nice to have a few days to soak in the Kotzebue vibe, and thanks to Lavonne I had a great place to hang.

I enjoyed walking around the community, watching the seals bobbing in the ocean along shore, noticing the juxtaposition of the playground next to the graveyard, the utilitarian yards around the homes containing Conexes and fishing gear, and the omnipresent four-wheelers. Considering the size of Kotzebue, the condition of the roads and the cost of fuel, I could see how practical four-wheelers are. Lorena and Whittier had been waiting a month for a part from Nome to fix theirs.

That didn't seem right to me, but I could see there were a lot of frustrations to living here. Store-bought food was crazy expensive and not always so healthy. Two small bags of potato chips cost $12.

I brought Lorena some raspberries that I picked in my Anchorage backyard. I understood that local foods were important in this part of Alaska, but I could see it even more clearly now.

In late afternoon, I made my way to LaVonne's Fish Camp, a few miles down the coast toward Cape Blossom. The old stick-shift truck groaned as it plowed through the soft beach road following the shoreline. The camp is dead center in the middle of the road; villagers travel back and forth through the middle of camp to their own camps farther down the beach — a great way to meet the locals.

LaVonne is an amazing woman determined to make the world a better place. I so appreciated her interest in my family and my connections to the area, as she has lived and worked there some 40 years now. Her camp is a place to stop for coffee and conversation when the fish aren't running. It is a place newcomers can get to know the locals and learn about the local ways, taste the food and learn about subsistence.

I was happy to make myself useful washing dishes, as the sink had the best view around looking down the beach at the landscape and the expansive sky. I was honored when LaVonne deemed me a "good camper" and invited me back. I spied some rhubarb growing near the main building and offered to harvest it if I could share some of it with Lorena. She had told me she liked to add it to her berries when making jam.

This rhythm of the natural land was enjoyable — but the specter of climate change was at the front door. Long lines of peat had settled on the beach, creating a thick soup at the water's edge. LaVonne explained that the land at Cape Blossom was breaking off and falling into the ocean. The current and waves were carrying the dissolving peat down the coast. It exposed softening permafrost. Their world is literally dissolving around them.

This land has changed dramatically in many ways since my great-grandfather tread on it. My amazingly adaptable Native family members feel it most. To not love and care for the land is to deny loving and caring for ourselves, and in this belief I am a part of this human family that calls Alaska home.

Beverly Churchill is an Anchorage freelance writer who previously worked at the Valdez Vanguard.