Coming to the Anchorage jail: Nature imagery to stave off sensory deprivation in solitary inmates 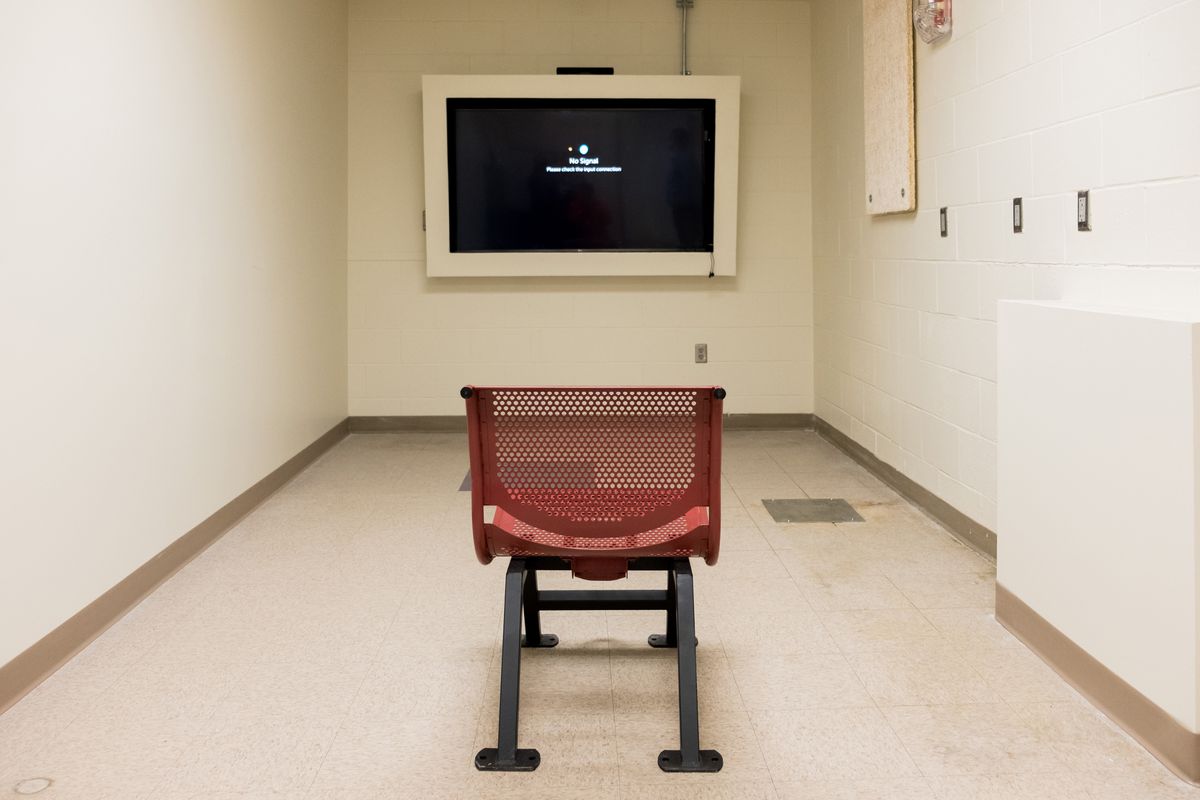 The Anchorage Correctional Complex plans to implement a new room to help reduce anxiety among solitary confinement inmates through the use of visual and audio aids. Inmates can choose from a variety of nature and wildlife videos along with sounds of nature or classical music. (Young Kim / Alaska Dispatch News)

The Anchorage Correctional Complex plans to implement a new room to help reduce anxiety among solitary confinement inmates through the use of visual and audio aids. Inmates can choose from a variety of nature and wildlife videos along with sounds of nature or classical music. (Young Kim / Alaska Dispatch News)

The Anchorage jail will soon have a “green room,” where inmates in solitary confinement can get a break from the sensory deprivation of life in a cell 23 hours a day by watching videos of clouds, raindrops, flamingos and other natural images.

The room, which prison officials say will open to inmates in a few weeks, is part of a broader effort to reform solitary confinement in Alaska prisons announced by the Department of Corrections this week.

The Anchorage Correctional Complex is trying to put fewer inmates in segregation and for less time, said Chris Lyou, a superintendent at the jail. Another goal is to make solitary a less psychologically damaging experience.

The green room idea is based on “The Nature Imagery Project” pioneered by clinical psychotherapist Pamela Hasbach at the Snake River Correctional Institution, a medium-security prison in eastern Oregon. Researchers found that inmates who watched nature videos “showed reduced levels of aggression and were less likely to be disciplined than those in similar cell blocks,” according to the American Psychological Association.

“The sensory deprivation effects of segregation and solitary confinement I think are well-documented,” Lyou said. “And this is something that we’re trying to address in a variety of ways. This is something we can do in-house, with very little resources.”

The “segregation” unit at the Anchorage jail is an austere place, even by jail standards.

The walls of cells are cinder block white, and the only natural light comes from two narrow slats. Cell doors are heavy and solid, with only an opening for a tray of food. Inmates end up in segregation for either behavioral infractions or because they request to be, a status known as “protective segregation.”

For an hour outside their cell, prisoners may exercise in a recreation yard connected to the unit. But the yard’s high, solid walls afford only a glimpse of sky.

Prisoners are not allowed DVDs, and even access to items like pencils and paper is strictly limited. On a recent Wednesday, as jail officials held a tour for media and visiting officials, the unit was mostly quiet. Inmates peered out behind the cells’ thick doors. People have committed suicide in the cells, like Mark Bolus, a mentally ill inmate who died in 2014 in an isolation cell. On a shelf, battered paperback books ranging from Nora Roberts to Shakespeare were the only recreational items visible in the unit.

In segregation there is “no nature,” said Olga Guerra, a probation officer in the prison who deals with inmates in segregation and their right to appeal their placement.

That’s where the “green room” comes in.

The room, which previously was a little-used staff lounge, isn’t finished yet. So far it has a chair facing a high-definition 42-inch TV screen and some paneling to improve acoustics. It will soon be painted a shade of green called “relish,” Lyou said.

Solitary confinement inmates will be able to sign up for scheduled visits to the room, Guerra said. The longest in solitary will get first priority. Correctional officers will also be able to use the room as an incentive for good behavior, or to offer to an inmate who has received bad news from home or is otherwise having a rough day, she said.

When they enter, they will be given choices — something lacking from their jail lives — about which nature DVDs they want to watch, Lyou said.

“They can make a choice and choose audio. And then we will secure them to this chair and turn off the lights and turn on the TV and sound. And we’ll see how this works,” Lyou said.

On Wednesday, prison officials showed visitors one possibility, a video of birds drinking from a birdbath. Other possibilities include imagery of “clouds, raindrops, flamingos, mountains, cascades, jungle, birds,” set to nature sounds or soothing piano music, according to Guerra. An option called “birdcage” seemed destined to be unpopular.

For inmates in the hard-walled prison world of solitary, it will be the closest they’ll get to nature for a while.