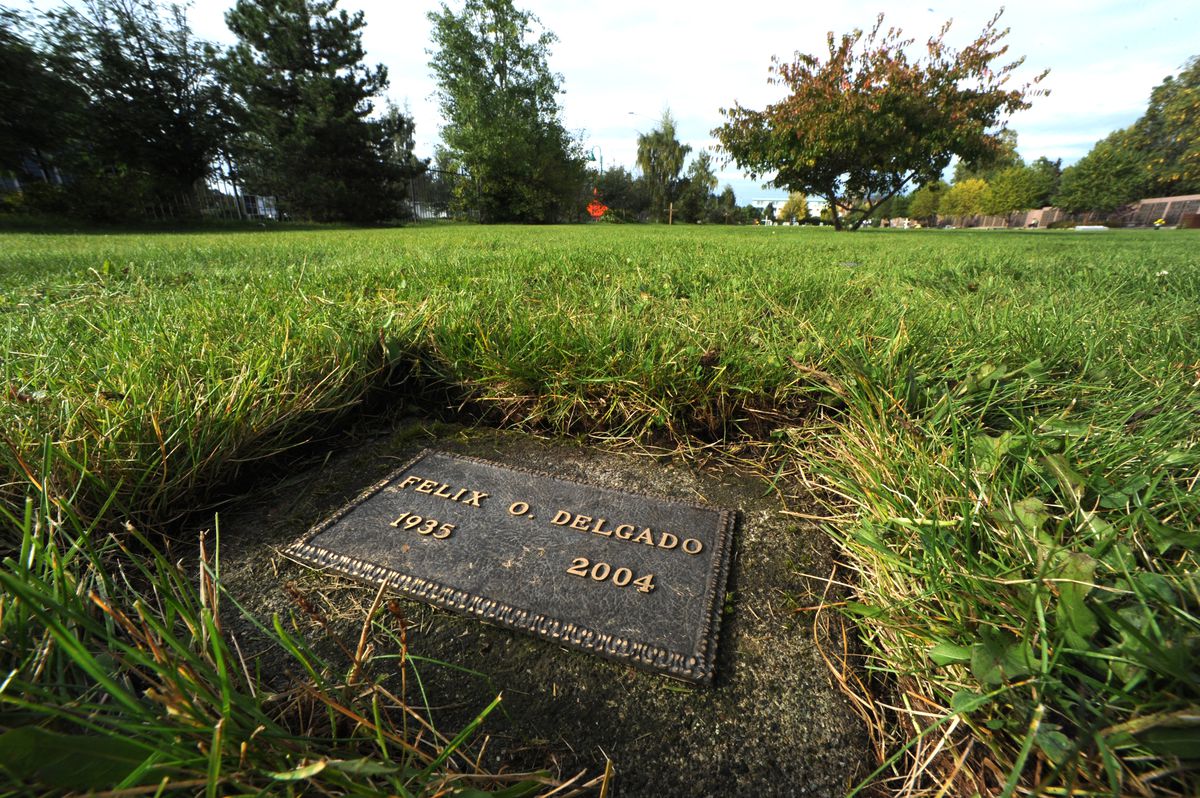 Felix Delgado’s grave at the Anchorage Memorial Park Cemetery. The state of Alaska holds close to $80,000 that was owed to him and remains unclaimed. (Bill Roth / Alaska Dispatch News)

Felix Delgado’s grave at the Anchorage Memorial Park Cemetery. The state of Alaska holds close to $80,000 that was owed to him and remains unclaimed. (Bill Roth / Alaska Dispatch News)

Felix O. Delgado was buried in the Anchorage Memorial Park Cemetery on a winter day in 2004. He had no family to inherit his possessions and there was no funeral. His landlady threw out all his belongings a month after he died, telling a court-appointed property custodian that all Delgado owned were some old clothes.

Delgado worked as a cook, waiter and janitor. But he also traded stocks on the side and left behind an account at brokerage firm Morgan Stanley containing about $80,000. He listed no beneficiaries. After a fruitless search for Delgado's surviving relatives, the money was sent to the state of Alaska's trust fund for unclaimed property. After 13 years, no legitimate heirs have stepped forward to claim it.

Some of it, like Delgado's, will likely never be restored to a rightful owner.

Property goes unclaimed all the time. Deposits are left with landlords, utilities or other businesses. Bank accounts may be opened and forgotten. Mailed checks might not reach their intended recipients for all kinds of reasons.

The state is the last stop for assets without an owner. Companies and institutions are required by laws in every state to send unclaimed property to the state of the intended recipient's last known address.

"It's a fun department to work at because it's a happy place," Lewis said. "Unclaimed property offices were basically set up to protect people so companies can't say, 'We can't find this person so we get to keep their money.' "

Delgado's money wound up with the state of Alaska because he had no will and no identifiable heirs. The search for his family began when he died on Jan. 9, 2004, in Anchorage after he fell on a patch of ice and broke his leg. In the hospital, he contracted pneumonia and had a heart attack, according to a coroner's report.

Attending nurses found no contact information in his wallet, according to court documents. Anchorage police searched his modest residence in Spenard and found no clues to surviving relatives. The funeral home and the state District Court found no heirs, nor did the temporary property custodian and personal representative for Delgado's estate, both appointed by the court.

"You do a diligent search and after a certain point you have to turn it over to the unclaimed property division," said Kenneth Kirk, the attorney appointed as Delgado's former personal representative. "Sometimes you find someone and say, 'Hey, your second cousin died.' But there are some folks for whom you just can't find anybody."

Kirk could not recall what steps he took to find Delgado's relatives, but his work is documented in court filings. Delgado was born in Spain, so Kirk tried the Spanish consulate. He also spoke with Marieann Vassar, the temporary property custodian, about her efforts to find family members. He called Anchorage police to discuss what they had found at Delgado's residence. He called the brokerage and a bank where Delgado kept his money. He looked at Delgado's federal tax statements.

On May 5, 2006, more than two years after Delgado's death, a Superior Court judge closed the estate and ordered the money be sent to the unclaimed property office.

Delgado's account was one of more than 65,500 in the state's unclaimed property database as of 2016 and is among the larger amounts on file. The total balance in the trust fund through June 2017 was $92 million, Lewis said.

Between entering assets into the system and returning them to owners, Lewis and her staff of two have little time to contact people on the list, but they try to do so whenever possible.

"When we're not swamped, we will go into the system and see if we can find people," Lewis said. "And we tell everybody to pay it forward and let everyone they know about our database."

The office recently alerted the owner of an account worth $564,046.51, the largest amount of money in the system to date. But they also try to reach those with smaller accounts.

"We can't show favoritism between people with thousands of dollars or a couple hundred dollars," Lewis said. "For some people, $200 is just as important as $79,000 might be to someone else."

Sometimes fee-finders will contact people or their heirs and offer to reunite them with their property. The more unscrupulous may insist that their services, and the accompanying fees, are required to claim property, Lewis said, but that's simply not true.

"Don't pay a finder's fee," she said. "Claiming property is a very easy and straightforward process and does not require a middleman."

Lewis says checking for possible unclaimed property in every state you've had an address should be an annual practice because states are constantly entering new property into their databases.

Alaskans can start with their state's unclaimed property website, which links to a national database, missingmoney.com. People with common names can cull what can be massive search results by identifying a previous address.

Early fall is the busiest time of year for the Alaska office. Businesses are rushing to meet the state's Nov. 1 deadline to turn over unclaimed property accrued in the previous year. The staff, which is short one person, is busy logging those entries.

Lewis said anyone who submits a claim between now and December may have to wait longer than usual to get their money.

The state keeps the money and other assets in trust in perpetuity. Should someone be able to prove kinship with Delgado, his assets will be there for them.

Kris Anderson was Delgado's closest friend. The two met while working for a catering and hospitality company at the Prudhoe Bay oil fields in the late 1970s, a few years after the trans-Alaska oil pipeline was built.

Delgado told Anderson he had been married two or three times to showgirls in Las Vegas. His parents were dead. He never mentioned siblings or children.

The two men would meet for coffee, discuss world history and reminisce about Barcelona, where both had lived. Delgado designated Anderson as his only emergency contact on the hospital forms he filled out before his death. Anderson went to see his friend a couple of days before he died. Delgado was in bed, hooked up to tubes and unconscious.

Anderson, who grew up in Kodiak, takes care to say Delgado's first name, "Felix," in proper Catalan. He said he was not surprised that Delgado left behind such a substantial sum.

"He was into trading stocks and I know he made money at it," said Anderson, who still lives in Anchorage. "If you saw him you'd think he was a bum, but he was by no means a pauper. I was sad when he died because there was no one to call to tell to come get his stuff."