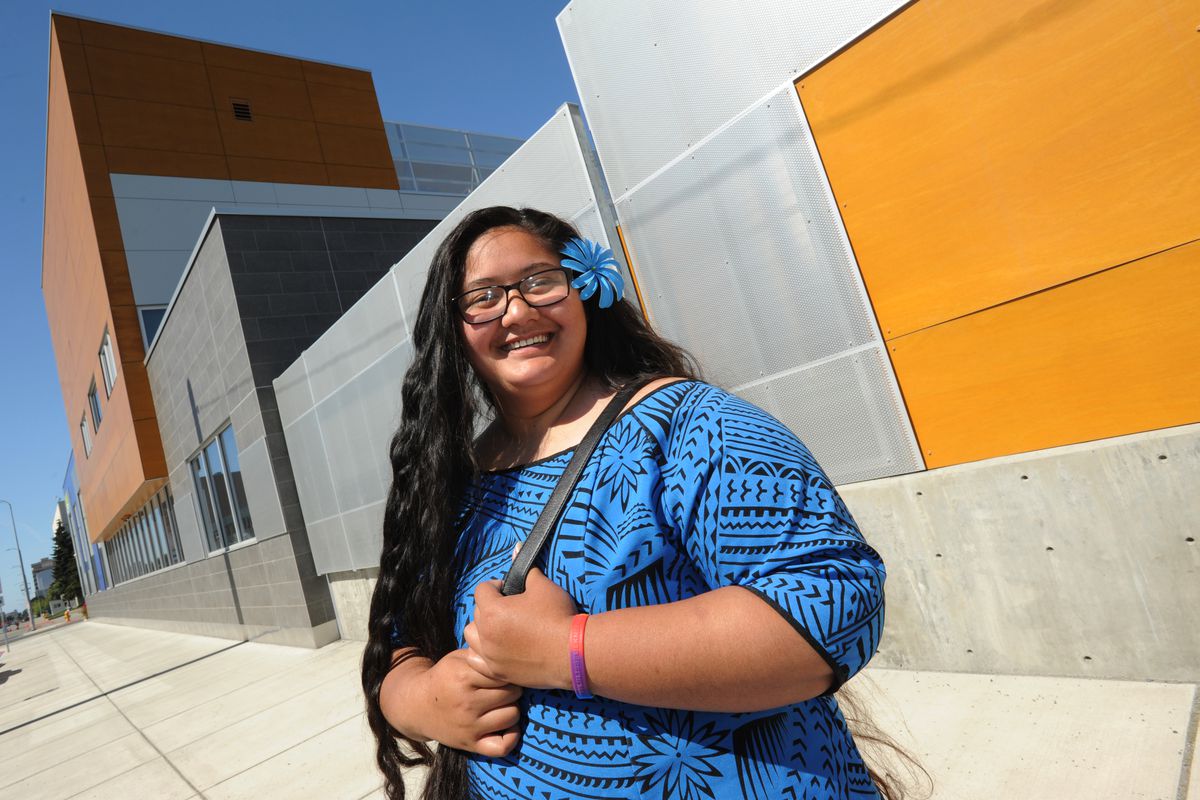 Dahsuri (Dash) Togi is a Youth Task Force activities coordinator at Covenant House Alaska and helped develop the Premera-funded project for homeless youth. She came to Covenant House in 2016 and was homeless at the time.  (Bill Roth / ADN)

Dahsuri (Dash) Togi is a Youth Task Force activities coordinator at Covenant House Alaska and helped develop the Premera-funded project for homeless youth. She came to Covenant House in 2016 and was homeless at the time.  (Bill Roth / ADN)

Alaska's largest insurance company said Thursday it is donating $1 million to pay for apartments, case management and other programs for homeless young adults in Anchorage, kicking off a larger donation campaign aimed at behavioral health and homelessness in the state.

It gives a major boost to a federally-funded project developed in part by former and current Covenant House residents. The money for the donation surfaced in the form of an unexpected rebate tied to the changes in the federal tax code, officials said. As part of the refund, the Seattle-based nonprofit company, which serves Alaska and Washington, has committed $40 million to addressing behavioral health issues and homelessness in Alaska and Washington, said Paul Hollie, the manager of Premera's social impact program.

Over the next five years, a total of $8 million will be dispensed to Alaska programs similar to Covenant House, Hollie said. He said additional awardees have not yet been identified.

Covenant House stood out as a prime example of what the company hopes to accomplish, Hollie said.

"We thought this was an excellent combination of just what our goal was, which is to find solutions, as many as possible, for folks at that crossroads of behavioral health and homelessness," Hollie said.

Some of the money will be used to remodel a donated fourplex in the Valley of the Moon area, providing eight one-bedroom apartments for homeless young adults between the ages of 18 and 24, said Alison Kear, the executive director of Covenant House.

Kear said the donation will also fund clinical and behavioral health services that can help the youths stay in housing.

Since January 2017, Covenant House has been part of a federal demonstration project to expand services for homeless youths. The U.S. Department of Housing and Urban Development selected Anchorage as one of 10 cities selected nationally to run the project.

The first phase was figuring out the gaps in helping youth transition out of homelessness, Kear said.

One big, glaring gap emerged when it came to housing, Kear said. There were no specific apartment programs dedicated to relatively self-sufficient homeless young adults, she said. She said homeless youth between 18 and 24 have been vulnerable to trafficking in order to have a bed and a place to live.

State statistics indicate that one out of every five individuals experiencing homelessness in Alaska is younger than 18. Covenant House serves several thousand youths in crisis each year, a large number of whom are aging out of the foster care system.

Dahsuri Togi, 20, co-chairs a youth committee of Covenant House that has helped shape the HUD project. She came to Covenant House in 2016 and was homeless at the time.

She said she didn't even realize it was a shelter for the first few months she lived there. Eventually, she moved to a transitional living program in dorm-like housing in downtown Anchorage.

After graduating from that program, Togi got her own apartment and car. She is now a live-in peer support at another Covenant House program. She said the housing programs are vitally important.

"Anybody that's 19, 20, 21ish, it's really hard for them to get apartments because, for one, they don't have any background in renting an apartment or even having a roommate," Togi said.

Premera has a long history of charitable giving, sponsorship and volunteerism, Hollie said. But he said 2017 was the start of what's being called the "social impact" program. He said the program is based on measurable results.

Hollie said the investments, by promoting better health and wellness, are expected to help save money in the long term for the overall health care system. But he said the immediate goal is to help communities find solutions to homelessness.

Kear said the Premera donation won't pay for rent. She said rent will be covered by federal funds and private matching money.

While the Premera money is a one-time donation, Kear said she expects to attract additional donations to keep the program going.