This Eagle River woman served on D-Day and was the first nurse at Milwaukee’s County Stadium. She just turned 100 -- and still loves a good party. 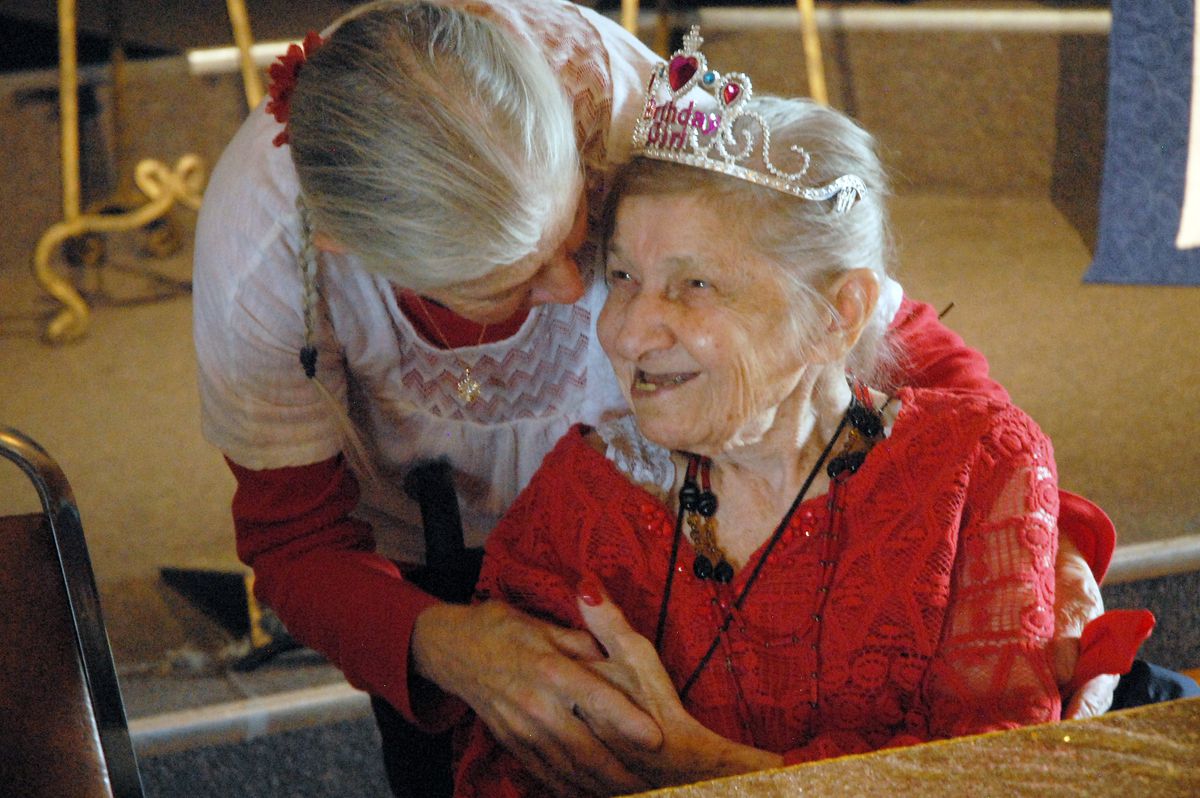 Charlotte Schwid gets a hug from friend Rose Galler during Schwid's 100th birthday party at the Eagle River VFW on Wednesday, May 22, 2019. Schwid is a former Army nurse who served in England during the Allied invasion of Europe in World War II. (Matt Tunseth / Chugiak-Eagle River Star)

Charlotte Schwid gets a hug from friend Rose Galler during Schwid's 100th birthday party at the Eagle River VFW on Wednesday, May 22, 2019. Schwid is a former Army nurse who served in England during the Allied invasion of Europe in World War II. (Matt Tunseth / Chugiak-Eagle River Star)

The guest of honor was resplendent in a bright red dress and a pair of black flats she had picked out several days before the party.

Wearing a “Birthday Girl” tiara atop her silver hair and surrounded by piles of birthday cards sent from around the world — and fresh off a phone call from a congressman — Charlotte Schwid’s smile Wednesday was as bright as the sunlight pouring in through the windows of the Eagle River VFW.

“I’ve met so many people today,” she said between hugs from those who came to honor her long and remarkable life.

The 100th birthday gala was the work of Pheng Scott, an Eagle River woman who arranged the party and organized a massive birthday card campaign for Schwid, a former Army nurse who served in England during the Allied invasion of Europe in World War II. When Scott heard of Schwid’s milestone birthday several months ago, the Air Force veteran said she sprang into action.

“You only turn 100 once,” said Scott, who set up a P.O. box to receive cards for Schwid and publicized the birthday card campaign through an article in military.com.

Wednesday’s bash drew interest from an Anchorage television station and from as far away as Schwid’s home state, where a local TV station also picked up on the story earlier this month after Scott put out a call for birthday cards for the local celebrity.

Schwid’s no ordinary centenarian. Born before women won the right to vote, she grew up in Virginia, where she trained to be a nurse with the intent of becoming a stewardess. But World War II broke out while she was attending nursing school, so Schwid enlisted in the Army instead, according to her daughter, Eagle River’s Sharon White.

While in the Army, Schwid was stationed at a military hospital in Tidworth, England, when the Allied invasion of Europe took place on June 6, 1944.

“She has a recollection of seeing the planes flying overhead," White said.

After the war, Schwid moved to Milwaukee. She first worked in a veterans’ hospital, where she met her late husband. A lifelong baseball fan, Schwid became known in Milwaukee as the first nurse hired at the city’s County Stadium when it opened in 1953. She worked at the stadium for four years, White said, during which time she got to meet the likes of baseball Hall of Famer Hank Aaron.

“It was one of the happiest parts of her life,” White said.

Schwid now roots for the Milwaukee Brewers, but she’s still got a soft spot for the Braves -- even though the team moved from Milwaukee to Atlanta in 1965.

“To this day she just loves watching baseball,” White said.

Schwid experienced a stroke a decade ago and doesn’t speak much, but her daughter said she was incredibly excited in the days leading up to her birthday.

“She is out-of-control excited,” White said a week before the event.

Although she’s been slowed by her stroke, Schwid still loves a good parade.

“She just wants to get up and go and go places. She loves fairs and festivals,” White said.

The Bear Paw Grand Parade during Eagle River’s annual midsummer celebration is always a favorite, as is the Alaska State Fair in Palmer.

“Bear Paw we go all three days every year,” she said.

White said her mother is proud of her wartime service and in 2014 the pair took an Honor Flight to visit the World War II Memorial in Washington, D.C. The experience moved the former nurse, who has since attended each year’s Honor Flight homecoming when the plane returns to Alaska.

“Every veteran on those trips are really excited and really happy,” White said.

According to the National WWII Museum, fewer than 500,000 Americans who served in the war were alive as of 2018. That’s part of why Scott thought it was important to honor a veteran like Schwid, whose work and sacrifice more than seven decades ago still has deep meaning for those who serve.

“They’re the ones who led the way for us,” she said.

In addition to the hundreds of birthday cards, Schwid has received letters of congratulations from the likes of U.S. Rep. Don Young and on Wednesday received a call from Virginia congressman Morgan Griffith, who represents the district where Schwid grew up.

As she surveyed the crowd Wednesday, Schwid couldn’t help but smile and said she was grateful for the many people who came out to celebrate with her on her big day.

Scott said hundreds of cards arrived for Schwid from all 50 U.S. states and numerous foreign countries.

“I’m just glad to be able to put a smile on her face,” Scott said.