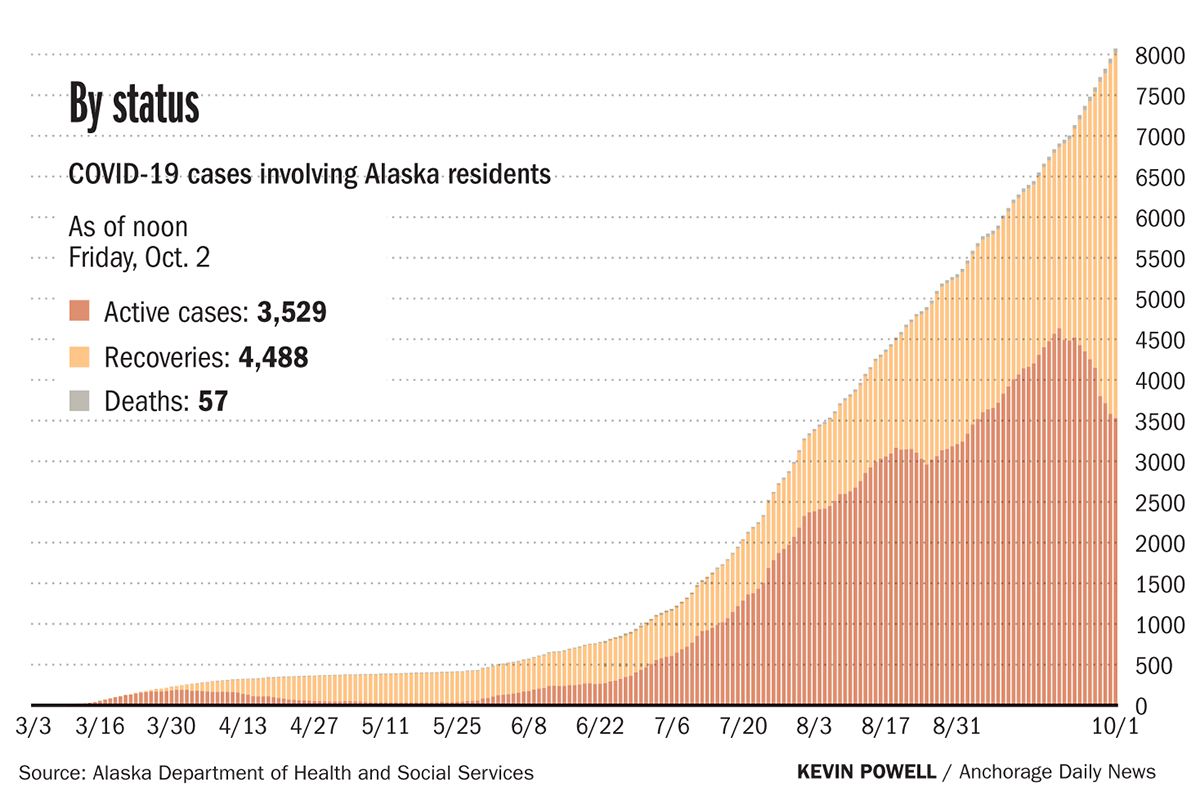 On Friday, 132 new coronavirus infections were reported around the state, according to the Department of Health and Social Services' COVID-19 dashboard.

No new deaths were reported. In total, 57 Alaskans have died with the virus since the pandemic began here in March. Alaska’s death rate per capita remains the lowest in the nation out of any state.

The number of active cases of COVID-19 among Alaska residents was 3,529 on Friday, a slight drop from 3,581 the previous day.

There were also 412 total active cases among nonresidents as of Friday.

Public health officials expressed concern this week about a rise in new cases seen across the state in recent days, but did not attribute those increases to any single specific cause.

“We’re definitely on an upward trajectory,” said Joe McLaughlin, the state’s chief epidemiologist, during a call this week. “If you look at the regional data, it’s being largely driven by Anchorage cases, Fairbanks cases, and we’ve seen increases in the North Slope Borough as well."

“We really want to make sure that people are being vigilant about following community mitigation strategies, keeping that 6-foot distance, and wearing a mask anytime you’re going to be around anyone who’s outside of your household or your immediate small little bubble," McLaughlin added.

Three staff and one youth at the Fairbanks Youth Facility, the state’s second-largest juvenile correction facility, have tested positive for the virus, the state health department announced in an emailed statement on Friday. Previous clusters have been reported at the McLaughlin Youth Center in Anchorage.

Of the 130 new cases of COVID-19 among residents reported Friday, 56 were in Anchorage; 29 in Fairbanks; five in Utqiagvik; four in Eagle River; four in Wasilla; three in Kotzebue; three in North Pole; two in Kenai; two in Nikiski; two in Kodiak; two in Juneau; one in Chugiak; one in Sterling; one in Palmer; one in Petersburg; one in Craig; one in Bethel; and one in an unknown region in the state.

There were two new nonresident cases: one in Fairbanks and one in Anchorage.

The state’s testing positivity rate has continued to rise, and was at 3.38% on Friday based on a seven-day rolling average. The rate can include multiple tests performed on the same person.

Positivity rate is considered an important indicator of whether a community or state is doing enough testing to find coronavirus infections and stop the spread of the virus. The World Health Organization has said countries with broad testing should have a positivity rate that stays below 5% for 14 days.