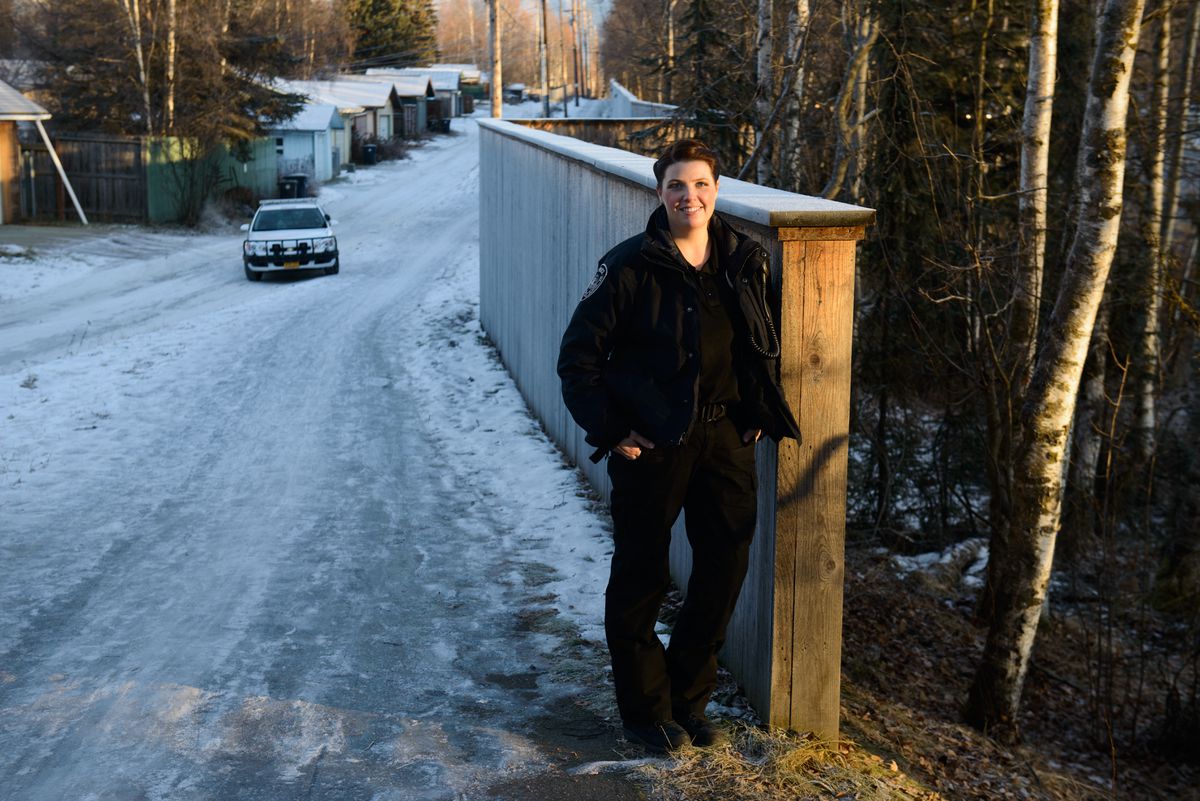 As a crime prevention student at an Oregon college, Robin Nave researched local crime concerns with a door-to-door survey.

The survey wasn't well-advertised. Nave, a new member of APD's Community Action Policing team, wasn't sure what to expect. But she found the handful of responses she got revealing.

This fall, Nave made presentations to the Government Hill and Airport Heights community councils after visiting both neighborhoods, relaying her data and observations. She discussed police behavior. And she offered ideas for making the neighborhood safer, from installing motion-sensing lights to pointing out the best spots for "No Parking" signs.

Her effort comes at a time when residents are more aware of city crime trends than ever before, through websites like Nextdoor.com and APD's community crime map.

Nave's commanding officer, Lt. Jack Carson, said Nave's work marks a more scientific approach, and a signal of the direction in which the department wants to go.

"It's creating solutions to a problem," Carson said in a phone interview. "It's not just going out and talking over some of the same points over and over. It's coming up with permanent solutions to problems and getting the community involved."

Nave, 38, is cheery and energetic. Community council presidents call her by her first name.

Her bosses on the community policing team encouraged her to come up with projects. Nave remembered her survey from her research as a student at Western Oregon University in Monmouth, about 60 miles southwest of Portland.

So she drew up a survey. She asked six questions, including whether the neighborhood was a better place to live than it had been a year ago, and whether the survey-taker felt safe going to parks nearby. She also asked a true-false question: "There is very little my neighbors and I can do to change things." The police department didn't have the money to conduct it, but two community council presidents, in Government Hill and Rogers Park, made the survey electronic and sent it to council members.

They got dozens of responses. There was also a strong response from the Airport Heights Community Council. Nave was thrilled. People shared worries about abandoned buildings, speeding on streets and drug sales in neighborhood parks.

For a few months, her data didn't lead anywhere. Nave said her supervisors weren't sure what to make of it.

But Carson, who took the job as CAP team commander in June, loved the idea of following up. From a safety meeting this summer with Turnagain residents frustrated about crime, late-night partying and disturbances in Lyn Ary Park, Nave got the idea of surveying a neighborhood and coming up with solutions to specific concerns. Carson gave her the go-ahead.

In September, Nave gave her first presentation, to the Government Hill Community Council.

There, she'd found that from 42 responses, the top five concerns were speeding, parking, drugs, theft and vandalism. She relayed police data in the presentation: Of nearly 900 calls to police from Jan. 1 to Sept. 7 of that year, one-tenth were related to parking. Officers took reports for 38 thefts, 15 burglaries, 36 assaults and nine incidents of vandalism.

Under a section called "Things I Noticed," Nave relayed observations from a visit to the neighborhood. She wrote that alleyways were dark and there were no streetlights behind homes. Parking was not clearly marked in the streets, making it easier for criminals to park anywhere and navigate the neighborhood, she said. Landscaping was overgrown.

Densely populated East Government Hill had the most calls for police service, Nave pointed out.

Then she made suggestions. Try motion-sensor lighting to bring more light to alleyways. Aim lights into parks for homes across from those areas. Ask the city traffic department about painting curbs for "No Parking" zones and putting up signs. Call the parks department and create a volunteer group to thin out overgrown trees and make more "natural surveillance."

Nave proposed "social pressure groups" of four or more to walk around at night and create an ambiance of vigilance. That strategy was deployed successfully this summer by Turnagain residents, who began holding gatherings outside the entrance to Lyn Ary Park late at night to remind people about the park's 11 p.m. closing time and no-alcohol laws. Calls for service there dropped, Nave said.

Nave doesn't want to, as she put it, "breed a band of vigilantes." But she said there are ways to make criminals more uncomfortable, to deter crime without confrontation.

"People want to do something, they want to help us," Nave said. "And there's things they can do."

In her Airport Heights presentation in October, where burglary and theft were the top concern, Nave indicated that theft was occurring because people were parking vehicles on the street, instead of in driveways. She also showed a photo of a street with no lights.

"When I checked the alleys I noticed there was plenty of room for vehicles in the rear driveways," Nave wrote in the presentation. "Residences need additional lighting."Airport Heights Community Council President Barbara Karl said she didn't know if the new suggestions have made a difference, but people were glad to have the information.

On Oct. 25, a few weeks after Nave's presentation in Government Hill, 29-year-old Ian Alex Bobich died in a shooting outside of an apartment building on Elm Street in the eastern part of the neighborhood.

Nave responded to the crime scene in Government Hill. She said she felt defeated, like she'd let the neighborhood down.

But Melinda Gant, the Government Hill council president, said Nave's presentation gave her and her neighbors a better idea of how to move forward in the aftermath of the shooting. There was immediate talk of clearing overgrown trees near the apartment building. Gant contacted the property manager at the Elm Street complex to raise concerns about the number of people parking on the street.

"Robin had a nice mix of understanding rules and regulations, but also bringing in, 'Let's see how we can make this work for you,'" Gant said.

Nave is preparing to visit Rogers Park for a neighborhood assessment. She sees this year as a trial run for the survey. She and Carson expect to make a bigger push online early next year.

In the short term, Nave said, she hopes people will be more aware of their surroundings. She doesn't want people to accept that a neighborhood is the way it is, and see police as the only answer.

Her own research has had an effect on her. Nave previously didn't turn on her porch light at her West Anchorage home, wanting to save money.

But since starting the survey project, she keeps her porch light on.

"You start to make people understand, if I do one thing, it's probably going to prevent something else," she said.