Don’t dump your trash on this Anchorage man’s property. He’ll find you. 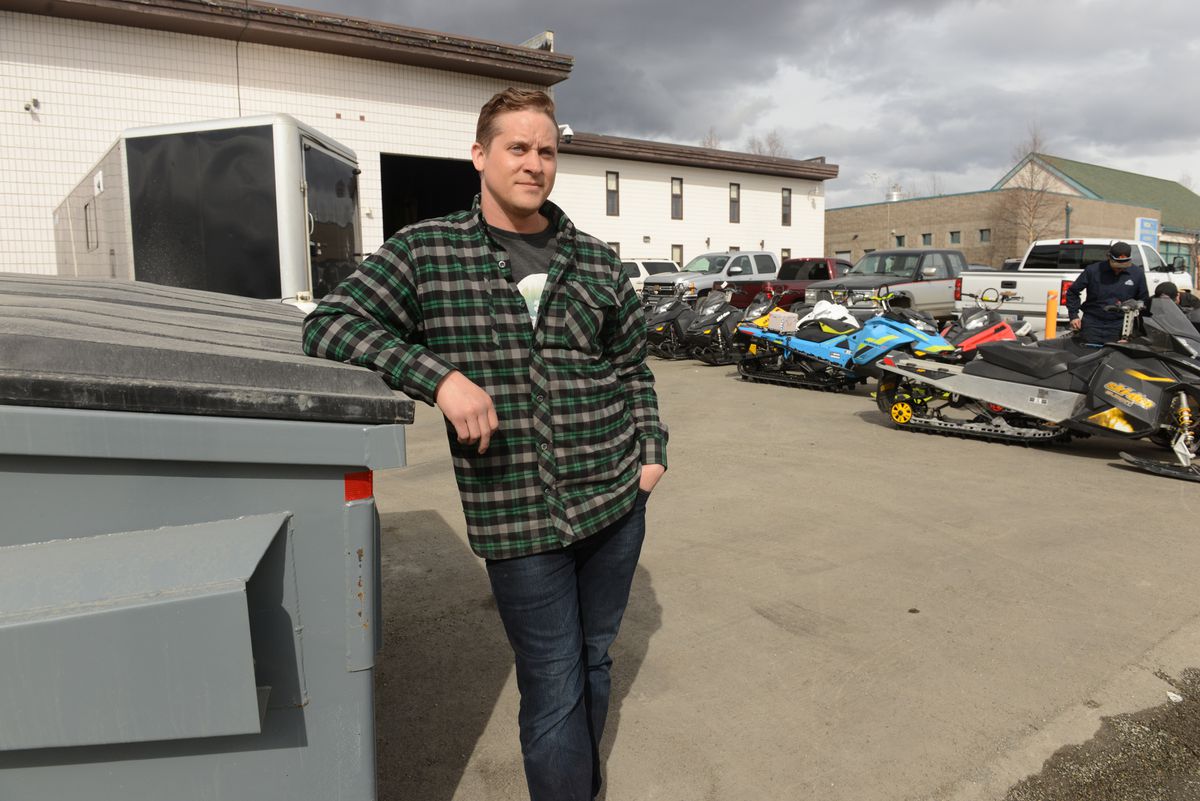 Chad Winberg stands next to the dumpster at his A2D Motorsports shop in south Anchorage, AK on Friday April 20, 2018. Someone dropped a water heater and boxes off at his dumpster and Winberg found who did it and returned the water heater to his driveway. (Bob Hallinen / ADN)

Chad Winberg stands next to the dumpster at his A2D Motorsports shop in south Anchorage, AK on Friday April 20, 2018. Someone dropped a water heater and boxes off at his dumpster and Winberg found who did it and returned the water heater to his driveway. (Bob Hallinen / ADN)

Random trash often appears overnight in the dumpster outside of A2D Sledworks, a snowmachine and four-wheeler repair shop in an industrial pocket of South Anchorage.

But when someone left a 200-pound water heater next to the dumpster one night last week, Chad Winberg decided he'd had enough.

"You're just ruining someone's day when you do this kind of stuff," said Winberg, who has owned his business about a decade.

What happened next is an example of do-it-yourself justice in a city where a spike in property crime has prompted business owners such as Winberg to keep a closer eye on their properties.

Though many surveillance-camera equipped vigilante stories in Anchorage center on people tracking down stolen goods, Winberg just wanted to know who left a huge hunk of steel trash on his property.

[UPDATE: Dumpster justice: The feud between 2 men over a water heater just got weirder]

Winberg checked his security cameras. He upgraded the system a year ago after a trailer full of snowmachine equipment was stolen out of his shop's driveway. (He got the stolen goods back; the case is still winding through the court system.)

On video Winberg saw the culprit: at 5:52 a.m. on April 15, a man pulled up in a truck and threw boxes in the dumpster outside Winberg's business. Then the man lifted out a water heater. He tried to put it into the dumpster, but it was too heavy, Winberg said.

"He just left it there for us to deal with," Winberg said.

[Let Floyd GO!': How a guy who finds stolen vehicles became a folk hero to some crime-weary Anchorage residents]

The license plate was easy to see in the camera footage. Winberg said he Googled the number and was eventually able to find the man's name.

Then Winberg searched property records. He found the man lived a couple of miles to the west. Later, Winberg drove past the house and saw a truck with a matching license plate.

Winberg made a sign. He taped it to the water heater: "Take your trash to the dump, not a dumpster I pay for. You know where I work. I know where you live. Do not come back."

With a bit of help, Winberg drove to man's house and planted the water heater in the middle of the driveway.

"We returned his trash to him," Winberg said.

The man wasn't there. But plenty of neighbors saw what happened, Winberg said. He posted pictures and wrote about the incident on Facebook.

[Alaskans are deluged with social media posts on crime. What's it doing to us?]

City law says residents can be fined for littering. The fine is $300 for the first time and $600 for each additional violation. The city's chief code enforcement officer, Jack Frost, said dumping is tough to prove unless there's a witness that can identify the vehicle or connect the trash to the dumper. Frost also said many reports of dumping involve a person who was paid to take away trash, but pocketed the money and dumped it somewhere else instead.

Winberg said he wasn't trying to be rude, mean or confrontational. He said it's fairly common for other people to use his dumpster. As long as it's not overflowing and there isn't a big mess, it isn't a big deal, Winberg said.

But with the water heater, Winberg said, it went a little too far.

"If you want to dump your trash, pay $20 and dispose of this thing properly," Winberg said.

What did the dumper have to say? A reporter visited his house a few days after Winberg deposited the water heater back on his driveway. The Anchorage Daily News is not naming the man because he has not been charged with a crime.

"Yeah, yeah," the man said, standing in his doorway in a quiet South Anchorage subdivision. He had indeed left the water heater at Winberg's dumpster.

The man admitted he'd made a "stupid mistake." Then he talked about how it wasn't like he'd broken into the business, or stolen a car. He talked about SB 91 — a criminal justice reform bill that has become a catch-all for complaints about crime in the city — and how he couldn't understand why Winberg made such a fuss.

"Think about all the 3,000 cars that are stolen in Anchorage every year," he said. "That's a story."

Still, he said he won't leave his trash at Winberg's business again: "Hell no. Not there."

As for the whereabouts of the water heater?