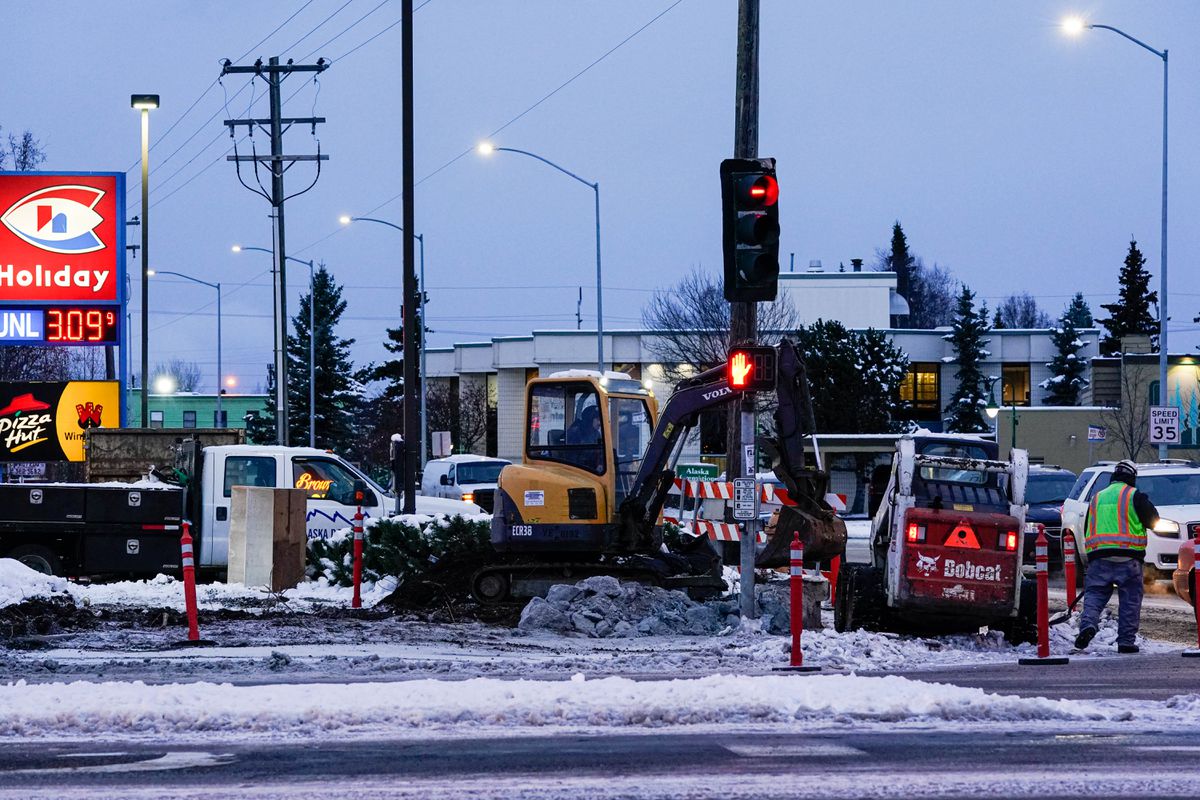 Workers on Tuesday demolished a concrete retaining wall on a busy corner of Anchorage’s Spenard neighborhood that police and business owners said had become a magnet for public drinking and other trouble.

The short concrete wall outside the Holiday gas station complex at the corner of Spenard Road and Minnesota Drive was the second to be torn out in the past month.

Earlier, crews removed a similar concrete wall-turned-bench from property at the corner of the Walgreens parking lot at Northern Lights Boulevard and Minnesota Drive.

Removing the structures is part of an effort to use environmental design to rein in public drinking, loitering, litter and panhandling in the city, said Anchorage Police Department spokesman MJ Thim.

Not everyone is convinced taking away an easy place to sit is an answer to complex problems of homelessness and addiction on display on some Midtown Anchorage corners.

“They believe this will somehow keep the population of people who like to hang out outside from hanging out on their corner,” said Jay Stange, president of the Spenard Community Council. “Removing the wall — I don’t think that’s removing the problem.”

The retaining walls are on right-of-way land owned by the state, said Alaska Department of Transportation spokeswoman Shannon McCarthy.

Originally intended as design elements to spruce up the long gray stretch of Minnesota Drive, they had been used as benches for years, attracting groups of people sometimes numbering a dozen or more.

The wall-turned-bench outside the Holiday store, which also features a Brown Jug liquor store and a Pizza Hut, attracted frequent police visits in 2019.

Anchorage police were called to the Holiday some 514 times through the end of October, according to data from the police department. The calls for service include 71 disturbances, 20 assaults, 84 trespassing calls, seven indecent exposure calls and one report of rape.

The Walgreens address garnered 60 calls in the same time frame, including four assaults.

Officers with police department’s Community Action Policing Unit came up with the idea, based on principles of “crime prevention through environmental design,” according to police spokesman Thim.

The idea is that changes in the built environment can influence people’s behavior, making public places safer.

After consulting with area community councils, the state issued a permit that would allow private businesses to remove the retaining walls, McCarthy said.

No public money is being spent on the project. Walgreens and Holiday are paying for the cost of the demolition, according to McCarthy.

Walgreens and Holiday Station stores corporate offices did not respond to a request for comment Tuesday.

“I also don’t want it in my backyard”

The bench outside the Holiday store has long been the site of public drinking and panhandling but the groups gathering there have gotten bigger this year, said Bonnie Welsh, who manages and is in the process of buying Alaska Leather, a motorcycle leather goods store at the northeast corner of the intersection.

Her store has its own concrete wall, which becomes a problem every once in a while when people are displaced from the Holiday corner, she said.

Welsh said she’s found “every kind of” liquor bottle in the bushes outside her store. She supports the decision to remove the walls.

Welsh said she noticed that a string of tents in grassy areas along Minnesota Drive disappeared after the demolition began on Monday.

Possibly her corner next, she said. She thinks the answer lies partly in support for organizations that help people leave homelessness by providing housing and job training.

Not everyone is convinced taking away the benches will work as intended.

People seem to be attracted to the Holiday corner by the opportunity to interact with a steady stream of motorists stopped at red lights, said Stange. If people are determined to be there, what’s to stop them from sitting on the ground, he asked.

Stange said he was speaking for himself and not the community council as a whole. People on the council have “a wide diversity of opinions on whether this is an effective idea,” he said.

John Lonch, 40, stood in the median of eastbound Spenard Road in front of the Holiday station panhandling Tuesday, as a crew tore out concrete on the sidewalk.

He said he used to frequent the bench, a popular place to meet and socialize for what he called his “little street family.”

“They weren’t doing nothing wrong. Just trying to live and find something to eat,” Lonch said of the denizens of the now-demolished bench. “To find a job.”

“It’s not against the law to sit there,” Lonch noted, watching the demolition crew.

Where will people go now? Lonch pointed across the street to other concrete retaining walls at the other corners of the intersection.