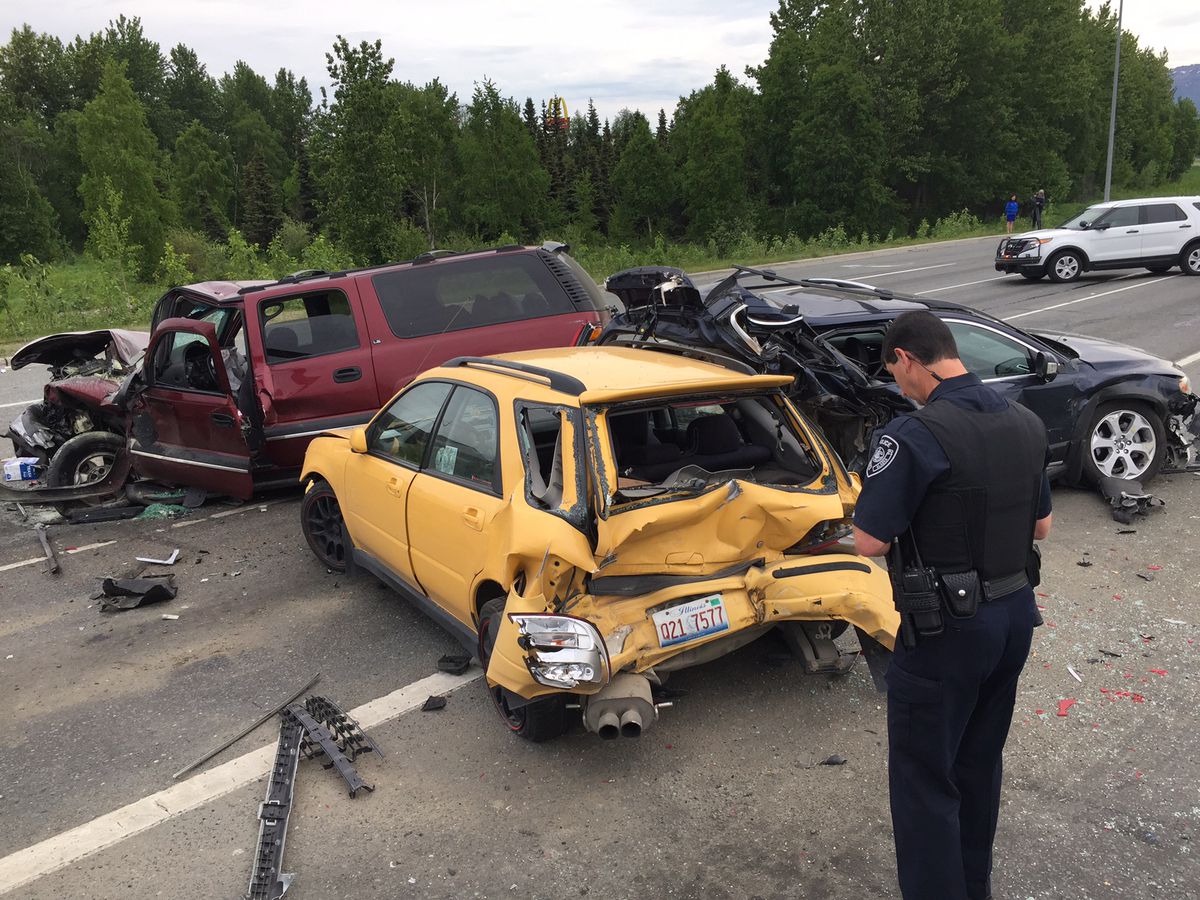 The driver Anchorage police say caused a crash that injured four people on the Glenn Highway near Northway Mall this month had massive amounts of alcohol in his system at the time, according to charging documents.

Court records show Jake Sundog Rotzler-Martus, 31, charged with DUI, reckless driving, failing to give immediate notice of an accident and three counts of assault in the June 9 series of collisions on the Glenn Highway from Muldoon Road to Airport Heights Drive. The wreck closed the busy Airport Heights intersection for about two hours.

A criminal complaint against Rotzler-Martus, written by Officer Alan Rydberg, said police responded just after 10 a.m. to a collision inbound on the Glenn near Muldoon Road. Officers found a semi tractor-trailer that Rotzler-Martus had rear-ended in a maroon 2002 Chevrolet Suburban.

"Investigation revealed that (Rotzler-Martus) had hit-and-run the semi and then continued driving inbound with a flattened (right front) tire," Rydberg wrote. "The hood was damaged in a manner that it impeded the driver's view, so he stuck his head out of the driver's-side window and continued to accelerate until he crashed into seven other vehicles that had been stopped at the red light to Airport Heights."

Three people from the struck vehicles at Airport Heights were taken to hospitals with injuries ranging from a broken bone to a concussion and cuts to a hand. Medics also hospitalized Rotzler-Martus after he was extricated from the Suburban.

"During contact at the hospital, officers smelled the odor of an alcoholic beverage coming from Rotzler-Martus' breath, as he spoke with them," Rydberg wrote. "His speech was extremely slurred."

Rotzler-Martus' medical records indicated his blood-alcohol content less than half an hour after the crash was at .385, Rydberg wrote, more than four times Alaska's legal limit for driving of .08. Cannabinoids from marijuana were also found in his system.

An overview of drinking effects from the National Institutes of Health labels blood-alcohol content levels at .31 or higher as generating "life-threatening" levels of impairment, noting that symptoms include loss of consciousness.

Officers conducting a search on the Suburban found a partially empty 1.75-liter bottle of whiskey, according to Rydberg. They also discovered bottles of an antidepressant and prescription-strength acetaminophen painkillers prescribed to another person.

An arrest warrant for Rotzler-Martus was issued Thursday and served Saturday, court records showed. He remained in custody Tuesday morning at the Anchorage Correctional Complex, according to a statewide inmate database.

A judge appointed a public defender to represent Rotzler-Martus during a Saturday arraignment listed in court records. His bail was set at a total of $20,000, with a court-approved third-party custodian required for his release.