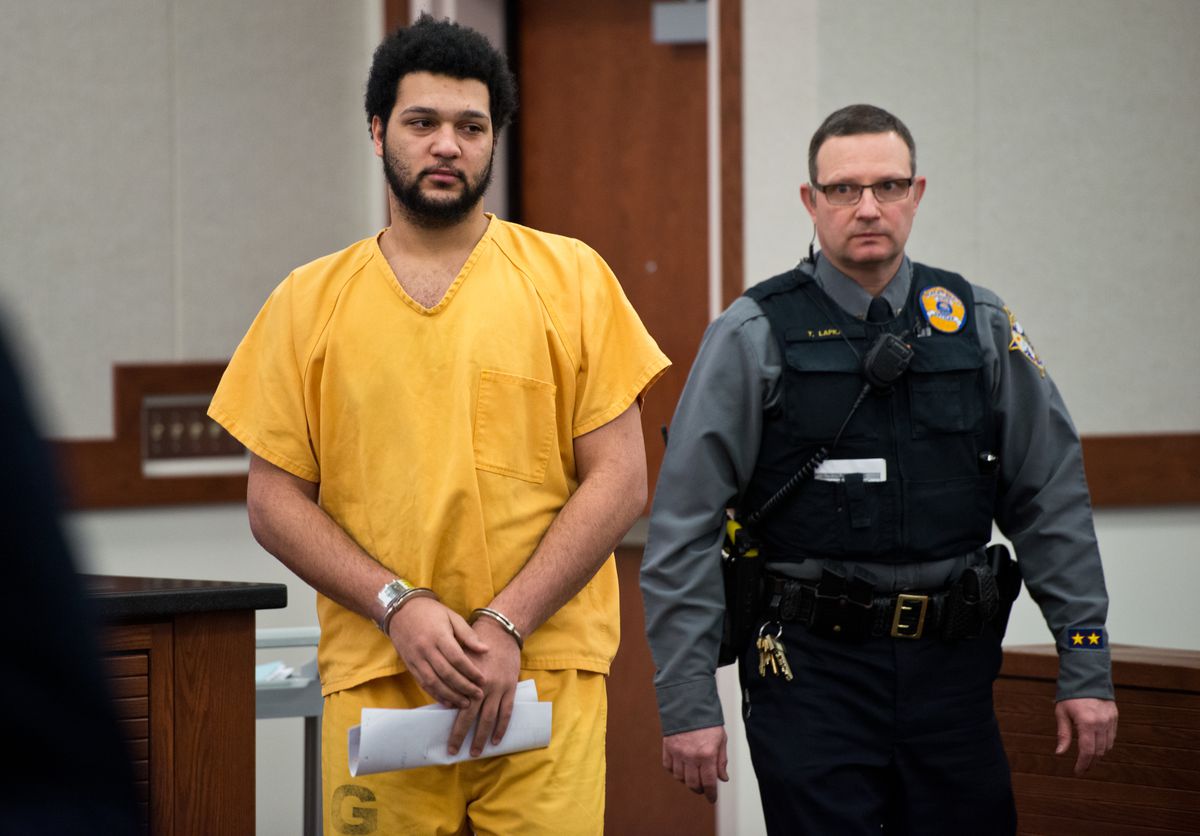 Damien Peterson was arraigned at the Palmer courthouse on Feb. 21, 2017. He has been sentenced to 18 years in prison, with five years suspended, for killing 16-year-old Frank Woodford. (Marc Lester / ADN archive)

Damien Peterson was arraigned at the Palmer courthouse on Feb. 21, 2017. He has been sentenced to 18 years in prison, with five years suspended, for killing 16-year-old Frank Woodford. (Marc Lester / ADN archive)

PALMER — Six months before popular 16-year-old David Grunwald died of a gunshot wound by the Knik River, a 16-year-old runaway named Frankie Woodford was killed by a shot to the chest.

Damien Peterson, the 21-year-old from Big Lake accused of shooting Woodford with a stolen 10mm Glock pistol in June 2016, was sentenced Thursday in an emotional hearing shadowed by the Grunwald case.

Along with Woodford and Peterson's mothers, Grunwald's mother, Edie, and father Ben attended the hearing.

One of the teens charged with murder in Grunwald's death, Austin Barrett, was in the room with Peterson the night Woodford died. Damien Peterson's brother, Devin Peterson, was convicted of helping the teens accused of killing Grunwald by giving them gas cans used to torch Grunwald's Bronco and hiding the guns used in the crime.

Investigators say they reopened a review of Woodford's death — previously considered an accidental shooting — after interviews for the Grunwald case provided new details.

Prosecutors say Damien Peterson shot Woodford while playing with the handgun on a bed in a downstairs bedroom of a "trap house" where teens smoked marijuana and played with weapons with little adult supervision.

Peterson told investigators Woodford shot himself. Woodford, however, told medics somebody else shot him before he died.

Peterson pleaded guilty to manslaughter in a deal that avoided a trial.

Before the judge decided his sentence, Peterson rose from his seat, turned and apologized to Woodford's family members.

"Not a day goes by that I don't think about him," he said.

Woodford's mother, Michelle Woodford, wiped away tears throughout the hearing.

"My son was a bright young man, very strong, healthy and now all I have is pictures to look at because he's taken him," Woodford told the judge, looking at Peterson.

"I can't hold my son anymore," she said, starting to cry. "I can't play with his hair, give him a kiss, be happy for him."

The sentencing range for manslaughter is five to nine years but Palmer District Attorney Roman Kalytiak sought 18 years through "aggravators" that reflect the seriousness of the crime and other factors.

Peterson was associating with Barrett — now charged with murder in Grunwald's death — and another teen, Jaylyn Franklin, facing trial for a double homicide in Anchorage, Kalytiak said. He was also convicted of assault for a 2016 case that occurred two days after Woodford's shooting.

Peterson told an investigator he choked the victim in that case, who was lured to the Valley and then brought back to Eagle River and robbed, the prosecutor said.

"If he's out on parole, these associations but for maybe his mother need to cease," Kalytiak said.

Peterson's attorney from the Office of Public Advocacy described him as a courteous young man with high rehabilitation potential evidenced by a kitchen job at Goose Creek Correctional Center and his ambition to enter the culinary arts field.

Public defender Yvette Soutiere criticized a pre-sentencing memo from the prosecution, saying it unfairly lumped Peterson into the Grunwald case.

He knew some of the defendants but didn't maintain those friendships, Soutiere said. Peterson's name didn't surface in any of the Grunwald evidence.

Michelle Woodford and several others in court wore "Justice for Frankie" signs pinned to their shirts. Her son was in foster care through the state Office of Children's Services at the time of his death, she said.

Woodford, who says a case worker knew her son was homeless but didn't report his location, has filed a civil lawsuit against the state Department of Health and Social Services as well as Peterson and the adult couple who owned the Wasilla house where the shooting occurred.

Peterson's mother, Alanah Peterson, sat a few seats away from Woodford and other family members. She perched on the edge of her chair, looking at her son and wiping away tears.

Her son and Peterson's brother, Devin, is serving a nine-year sentence for his role in the Grunwald slaying and separate federal pornography charges.