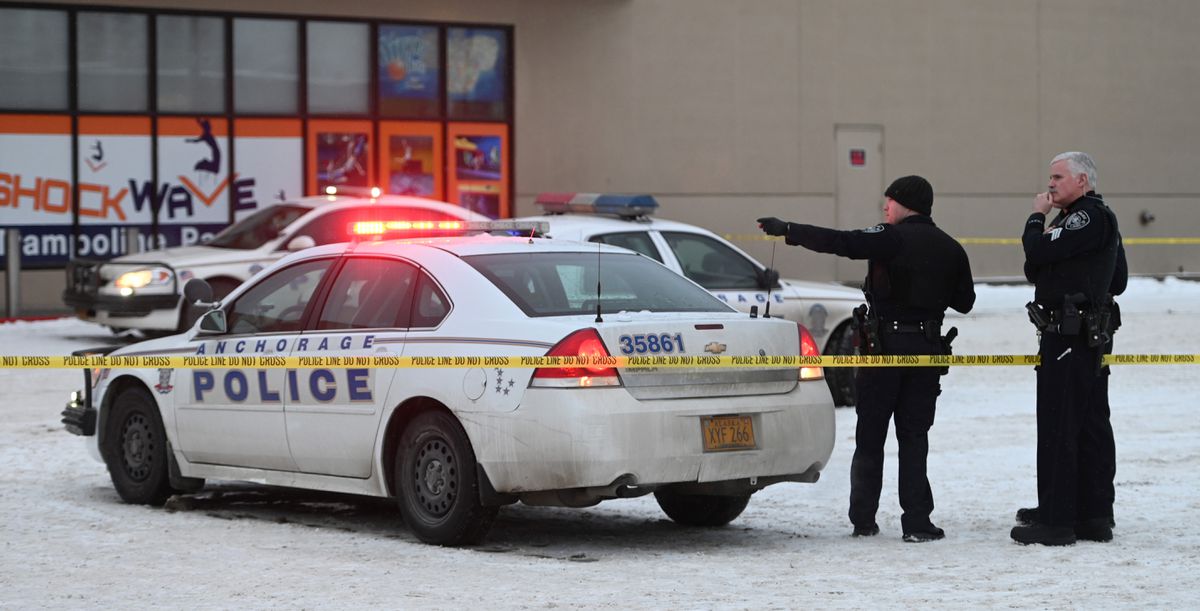 Anchorage police on the scene of an officer-involved shooting at the Northway Mall, Feb. 5, 2020. (Bill Roth / ADN)

Anchorage police on the scene of an officer-involved shooting at the Northway Mall, Feb. 5, 2020. (Bill Roth / ADN)

The officer who fired a shot during the incident was identified by police as Marvin Weinrick, who has been with the department since 2016, according to APD.

No one was injured during an officer-involved shooting Wednesday at the Northway Mall, Anchorage police said.

A man threatened employees at the Carrs on the west side of the mall Wednesday afternoon while he was shoplifting, employee Teeh Lavatai said. Lavatai works for the store’s loss prevention department.

The man was placing bottles of shampoo into his backpack when Lavatai and another employee approached him. Lavatai said the man displayed a handgun in the waistband of his pants and ran from the store. Lavatai called 911 just before 4 p.m. and said police responded quickly.

Junior Tuiuli, who was working as a security guard at JoAnn Fabric during the incident, said he saw a man walk toward Shockwave and JoAnn Fabric. He said he did not see the man holding any weapons.

“When APD arrived on scene, the initial officers saw a male matching the suspect’s description,” said Police Chief Justin Doll during a news conference Wednesday night. “That person was running eastbound along the front of the mall toward the trampoline park. Officers confronted the suspect, who was attempting to enter the trampoline park, and during that confrontation one shot was fired by one APD officer.”

No one was injured and Doll said it was not immediately clear where the bullet went. Doll said he believed the officer intentionally fired the gun.

It’s unclear if the suspect was threatening officers or pointing a weapon toward them. Doll said a stolen weapon was recovered from the scene.

The suspect was taken into custody and Doll said detectives are evaluating if he will face charges.

Doll said the Office of Special Prosecution will review the officer’s use of force to determine whether or not it was justified. The Anchorage Police Department will also review the incident internally, Doll said.

“That’s something that we always do to just review the officer’s actions and ensure that they comply with APD policy,” he said.

The involved officer will be placed on administrative leave and Doll said his or her name will be released after 72 hours.

Officers remained on scene at 6 p.m. near an area they taped off on the east side of the mall’s parking lot, in front of Shockwave Trampoline Parks. Doll said a large police presence is expected in the area for the next few hours as the scene is being processed.

Police are asking that anyone who may have witnessed the incident call 311.

“The Northway Mall obviously is a very public venue, lots of people in the area, so it would be extremely helpful to the police department if anyone who was in the area at the time and saw anything could call 311 and ask to speak to detectives and tell them you want to provide information about the incident that happened at Northway Mall tonight.”