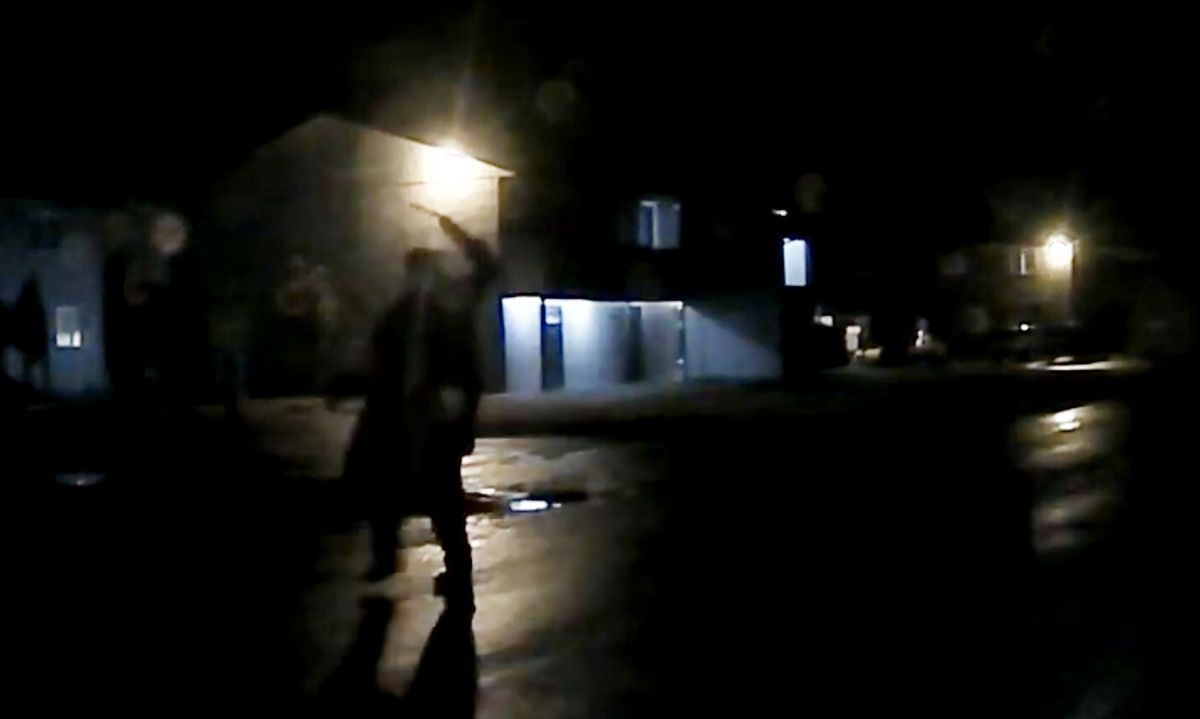 JUNEAU — The parents of a man who died after being shot by a Juneau police officer want the state to reopen its review of the case, citing evidence one of their attorneys says indicates the officer was "formulating" a plan to shoot Kelly Stephens.

Attorneys for Stephens' parents, during an online news conference Wednesday, offered video footage they said was released to them through a records request. They contend audio from Officer James Esbenshade's body camera, which they had enhanced and transcribed over the video, indicated the officer was saying such things as, "If you came at me with that, I'd shoot you. Drop you dead. You can't do that." The police report they cited contained similar language.

Stephens had been accused of threatening a grocery store patron and swinging a long chain before the fatal shooting.

Attorney Ben Crittenden said the comments they are seeking to draw attention to came after the officer responded to the incident at the store to take a witness report late on Dec. 28. The shooting occurred at an apartment complex after midnight on Dec. 29.

Crittenden cited the materials in a letter to the state Department of Law's Office of Special Prosecutions asking that its earlier conclusion - that the shooting was legally justified - be re-evaluated.

The video the family's attorneys cited was not among the videos and photos the Juneau Police Department publicly released last month, after Stephens' parents, Kevin and Virginia Stephens, filed a civil lawsuit.

Jack McKenna, a chief assistant attorney general with the Office of Special Prosecutions, in a March report concluded Esbenshade was “legally justified in his use of deadly force in order to defend himself from the threat of serious physical injury posed by Mr. Stephens.”

McKenna in his findings said the state would not bring criminal charges against Esbenshade.

McKenna said he had reviewed the results of the Juneau Police Department's investigation and materials including video and audio recordings and witness statements. His report said Esbenshade, through his attorney, declined to be interviewed about the shooting.

Maria Bahr, a Department of Law spokesperson, said Wednesday the video referenced in the news conference was provided to the Office of Special Prosecutions "as part of the initial investigation materials by the Juneau Police Department. The Department of Law is reviewing the material in light of the family's request and will respond by early next week."

A message seeking comment was left for an attorney who represented Esbenshade.

According to McKenna's report, Esbenshade responded after police received a call of a shot fired around 12:30 a.m. Dec. 29, with the caller saying someone was trying to get into her apartment.

The report cited footage that McKenna said showed Stephens walking toward where Esbenshade was and swinging a leash and chain.

Steven Glickman, another attorney for Stephens’ parents, said they worked with a company to make the audio louder and added transcription to a copy of the video they released Wednesday.

A portion of the police report highlighted and released by the attorneys references Esbenshade driving around after conducting a witness interview following the grocery store incident and talking to himself, "something similar to: 'you can't come at me with that, that is a deadly weapon. I'd shoot you and drop you dead.'" He later stated, "you get one chance, you better make it good. Because when I get ahold of you... There'd be nothing left of you," according to the police report the attorneys shared.

Crittenden, in his letter to McKenna, said the police report "describes in bone-chilling detail Officer Esbenshade talking to himself and formulating his premediated (sic) plan to shoot Kelly if he found him."

A Juneau police spokesperson referred questions to the city attorney, Robert Palmer III, citing the litigation. Palmer and attorneys for Stephens' parents noted the city has yet to be served with the civil lawsuit.

Palmer said attorneys "are prohibited from holding press conferences and talking about lawsuits in the media, with rare exceptions. So read into that as you will." He declined to elaborate.

Crittenden said Palmer's office "warned us not to go forward with this press conference because they believed we would be in violation of ethical rules."

Crittenden said his side was “fully within our right” to hold the press availability.