Motive unclear after man charged with shooting into crowd near downtown Anchorage, leaving 1 dead and 4 wounded 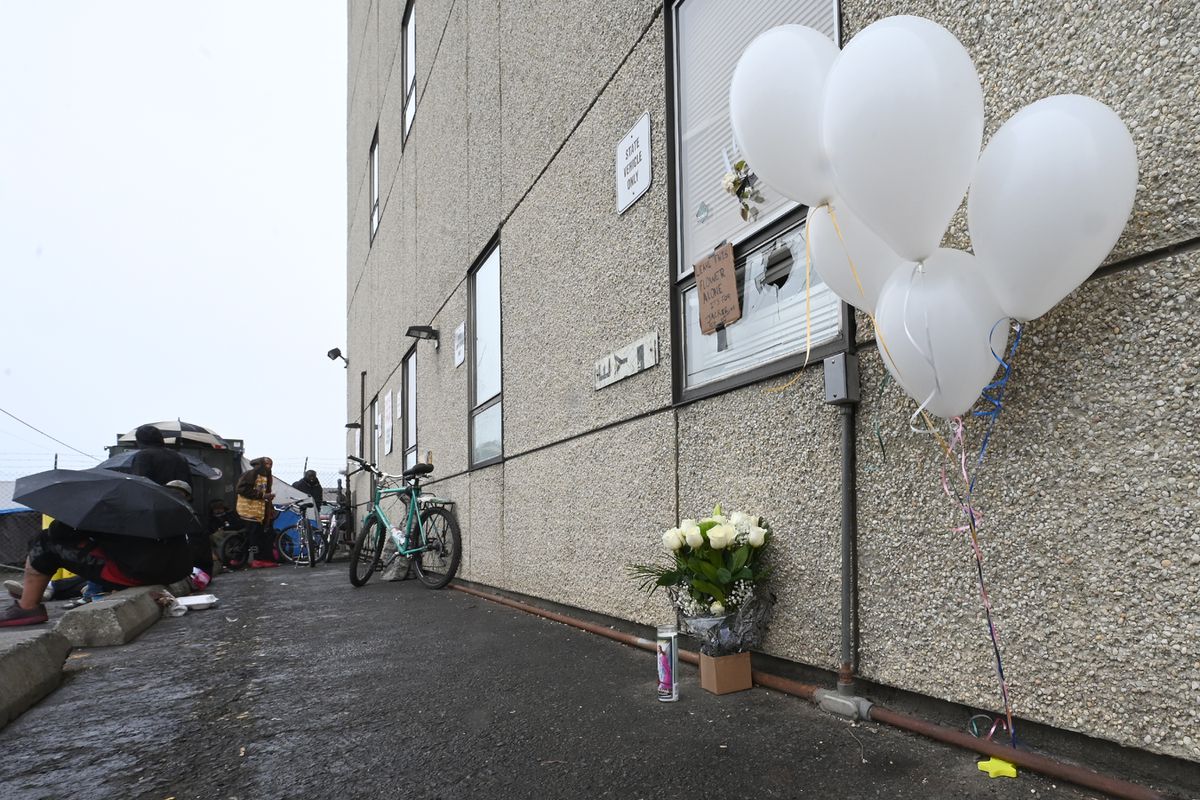 A memorial with flowers and balloons to honor Jaclyn Welcome, who was killed in a shooting early Saturday morning, were visible at the shooting scene on Sunday, June 20, 2021. Four other people were shot and taken to the hospital. (Bill Roth / ADN)

A memorial with flowers and balloons to honor Jaclyn Welcome, who was killed in a shooting early Saturday morning, were visible at the shooting scene on Sunday, June 20, 2021. Four other people were shot and taken to the hospital. (Bill Roth / ADN)

A 21-year-old man is facing numerous charges, including first- and second-degree murder and four counts of attempted first-degree murder, in a shooting near downtown Anchorage that left one woman dead and four others in critical condition.

On Sunday afternoon, a vase of white flowers was positioned below a shattered window of a former state office building near where Jaclyn Welcome, 37, was killed early Saturday. Many details remained unclear about the eruption of violence on Gambell Street between Fourth and Fifth avenues, including what may have motivated the shooting and whether the victims had been targeted.

Police arrested Anthony Herring on Saturday. The four people wounded by gunfire were still in the hospital Sunday, Assistant District Attorney Saritha Anjilvel said during Herring’s court hearing Sunday. Charging documents against Herring had not been made public as of late Sunday.

Police were called to the area around 2:45 a.m. Saturday, the department wrote in an online statement.

Police Chief Ken McCoy said Saturday that a large group of people had gathered at the intersection with Fourth Avenue when an altercation broke out between two vehicles and gunfire began. Police have not said whether the group of people were targeted by the shooter, or if they were caught in crossfire.

Two women and three men were brought to the hospital for gunshot wounds, police said. Welcome was declared dead at the hospital.

Gambell Street between Fourth and Fifth avenues was closed for much of Saturday and evidence markers dotted the pavement where shell casings had landed. People in the area told a reporter Saturday that they had heard rapid gunshots and screaming.

Police said they identified Herring as a suspect “through the course of investigation” and arrested him late Saturday.

Herring’s case was assigned to the public defender’s office.

Talking with a reporter at the scene of shooting on Sunday, Mike Macias, who described Welcome as his wife, said she had trouble maintaining housing because of a 2012 felony conviction. They were homeless when she was shot, he said.

During the hearing, Welcome’s sisters described Herring’s actions as “pure evil” and said the killing was senseless. Welcome, they said, was a mother, daughter and sister “who wanted nothing more than to reconnect with her family.”

“There’s absolutely nothing anybody can do to bring my sister back,” Welcome’s sister Desiree Montenegro said.