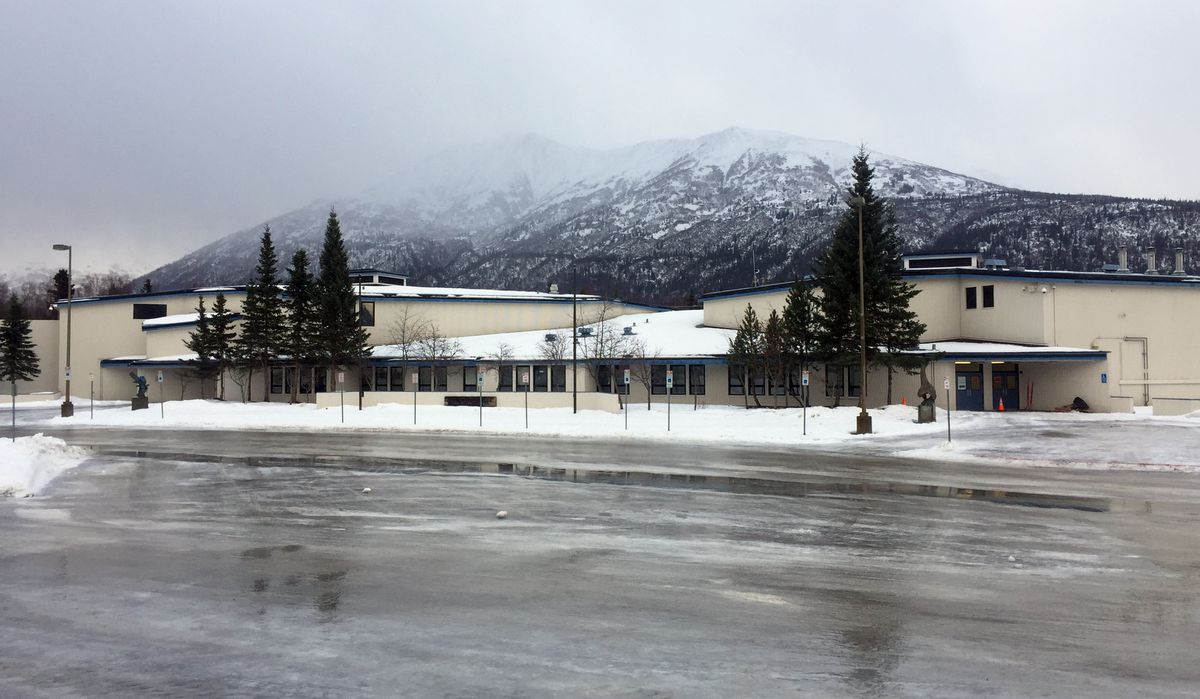 Anchorage School District officials announced on Jan. 22 that Gruening Middle School will remain closed for at least the 2019-20 school year. The school off Lee Street in Eagle River opened in 1984. (Star photo by Matt Tunseth)

Anchorage School District officials announced on Jan. 22 that Gruening Middle School will remain closed for at least the 2019-20 school year. The school off Lee Street in Eagle River opened in 1984. (Star photo by Matt Tunseth)

Anchorage voters may be asked to spend around $39 million to repair and upgrade earthquake-damaged Gruening Middle School — a price tag that’s $12 million more than the school cost to build in the early 1980s and $15 million more than recommended by a committee of community members who studied the issue earlier this year.

The now-shuttered school is the costliest item on a nearly $80 million school bond package currently being considered by the Anchorage School District for placement on the April election ballot. The reason for the increase is the desire by district officials to make additional needed upgrades that aren’t related to damage caused by the magnitude 7.1 earthquake that struck the Anchorage area on Nov. 30, 2018.

“The logic behind it is, yes we can do the minimum and put kids in a school that still needs and has been earmarked for these improvements for a number of years, or for an extra cost we can take the time to really give it the sound makeover that it’s due,” Anchorage School District spokesman Alan Brown said Thursday.

In March, the Anchorage School Board endorsed a plan to spend around $24 million to fix Gruening, the cost estimated to replace a roof and stairwell, as well as other repairs and seismic upgrades. According to Brown, the additional spending would allow the district to give the school “a total reset” and would be more efficient to complete at the same time as the earthquake repairs.

Among the other needed improvements are new flooring, upgraded electrical systems and an improved and more secure front entryway, Brown said.

The bond being considered by the board — which is still in the discussion phase — would borrow than $70 million for earthquake repairs districtwide, the bulk of which would be spent in the Chugiak-Eagle River area. More than $42 million would be used for repairs at Gruening and Eagle River Elementary, the two schools that have been closed since the earthquake. An additional $27 million would be used for earthquake recovery projects at 12 schools, including five in the Chugiak-Eagle River area.

The School Board will vote on what to include in the bond package during its meeting on Tuesday. It would then be up to voters to decide whether to approve the proposal in April. The federal government is expected to pay for some of the quake repairs, but it’s still unknown how much disaster money will go toward the projects.

This spring, School Board member Elisa Vakalis of Eagle River chaired an ad hoc committee of community members that recommended fixing Gruening Middle School for $24 million rather than replacing the building — which would have cost about $73 million, district officials said.

When she first heard the new cost estimate, Vakalis said, “That one hit me really hard.” But while the new price tag is high, she said, she believes the school needs to be repaired in a way that makes it safe and usable for decades to come.

“This will add 25 years plus of life to this building,” she said.

The troubled facility has long had issues with design and construction deficiencies and cost overruns, with its opening delayed by a year due to problems with the roof design. Initially projected to cost $15 million, by the time it opened in 1984 the middle school had cost taxpayers more than $27 million due to additional repairs, litigation and consulting fees.

Since the two-story school on Lee Street in the Eagle River Valley has been closed, Gruening’s roughly 600 seventh- and eighth-grade students have been attending classes at Chugiak High under an arrangement that’s expected to remain in place through at least the 2020-21 school year.