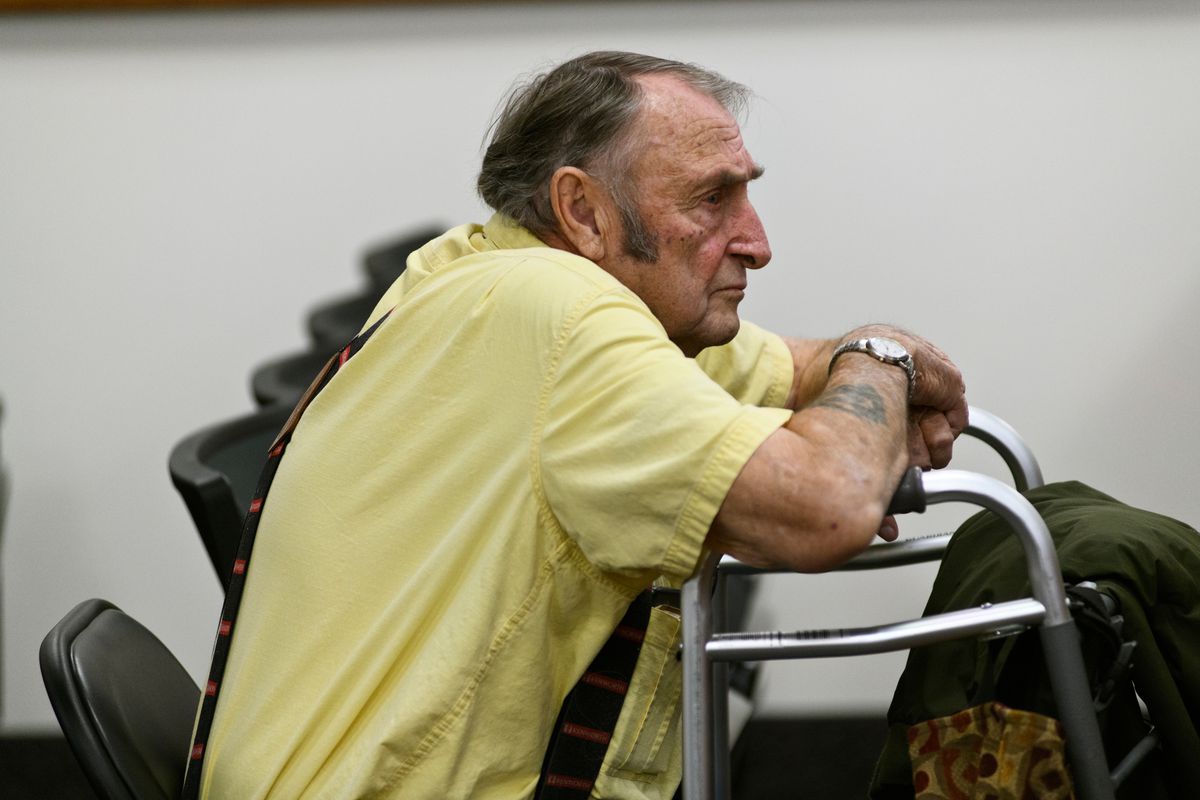 Arthur Fox is arraigned in a Palmer courtroom Wednesday. Prosecutors say a rock from a gravel truck driven by Fox flew into Hailey Belnap’s windshield as she was driving, causing her death in 2018. (Marc Lester / ADN)

Arthur Fox is arraigned in a Palmer courtroom Wednesday. Prosecutors say a rock from a gravel truck driven by Fox flew into Hailey Belnap’s windshield as she was driving, causing her death in 2018. (Marc Lester / ADN)

PALMER -- Truck driver Art Fox, 82, faces charges of criminally negligent homicide for his role in the death of a young woman on the Glenn Highway near Palmer last year.

Prosecutors say Fox was driving a gravel truck one weekday morning last September when he failed to check his empty side-dumper after dropping a load at the Alaska Sand and Gravel pit along the highway south of Palmer.

At least two rocks from the truck dislodged and hit nearby cars, they say.

One large stone struck Hailey Belnap’s little yellow Honda Fit, smashing through the lower left corner of her windshield and striking her head, according to Curtis Martin, the attorney representing Belnap’s family. Belnap, 25, lost control of the car, which left the road, hit an embankment and struck the gravel pit’s conveyor belt. Despite efforts to resuscitate her with CPR, she died at the hospital.

Another 5-inch-by-8-inch rock lodged in the front grille of a car behind Fox’s truck, injuring that driver, Lisa Ham.

Fox was indicted last month on charges of criminally negligent homicide and third-degree assault by a Palmer grand jury.

He pleaded not guilty Wednesday in Palmer Superior Court. Belnap’s parents, as well as Ham, participated in the hearing by phone. Roberta Belnap, her mother, said they supported making sure Fox doesn’t drive commercially any more.

Palmer Superior Court Judge John Wolfe released Fox on his own recognizance and scheduled his next hearing for October.

Assistant Palmer District Attorney Kerry Corliss argued unsuccessfully for Wolfe to bar Fox from hauling loads of any kind as a bail condition.

Fox, who used a walker coming into court and spent much of the hearing with his head hung over it, broke his leg in an unrelated accident, his attorney Jon Marc Petersen said. He’s not hauling loads now.

Petersen said his client was “cleared” and no actions were taken against his commercial driver’s license by the Alaska Department of Transportation. Fox checked the truck and the tires for rocks that day, he said.

The rock that killed Belnap and injured the other drivers didn’t come from the bed of Fox’s truck, his lawyer contends. Rather, his truck kicked up rocks that could have come from any of the nearly dozen trucks hauling material that day.

But a DOT report that Martin obtained via a public records request indicates that a witness saw “rocks falling from the trailer area” of a truck later traced to Fox. One hit Ham’s car behind the truck, embedding in the radiator. She followed the truck and got photos of it and the license plate used to find the driver.

The other rock hit Belnap, who was headed southbound in the opposite lane, according to an email from DOT commercial vehicle compliance inspector Michael Rogers that Martin obtained in his records request. Rogers viewed surveillance video from a nearby veterinary clinic and the pit.

“(T)he video from the vet clinic shows that a large dust cloud appears on screen coming out from under the rear of the trailer,” the email says.

The video shows brake lights on the car behind the truck, Rogers wrote. “A few seconds later the victim’s car appears in the video and shows her running off of the road and into the ditch and coming to a stop” against the conveyor belt.

Rogers, along with Alaska State Troopers, talked with Fox at his home, according to his email. He told them he’d been driving for 12 years and didn’t know anything had happened that day until he got to the dump and was told to go home.

Rogers said he asked Fox if he “got out of his truck and did a walk around to make sure he had no rocks on the trailer or in his tires,” he wrote. “He stated no and that he never does nor does anyone else.”

An examination of the truck’s tires revealed rub marks indicating something had lodged between two sets of dual tires, the email says.