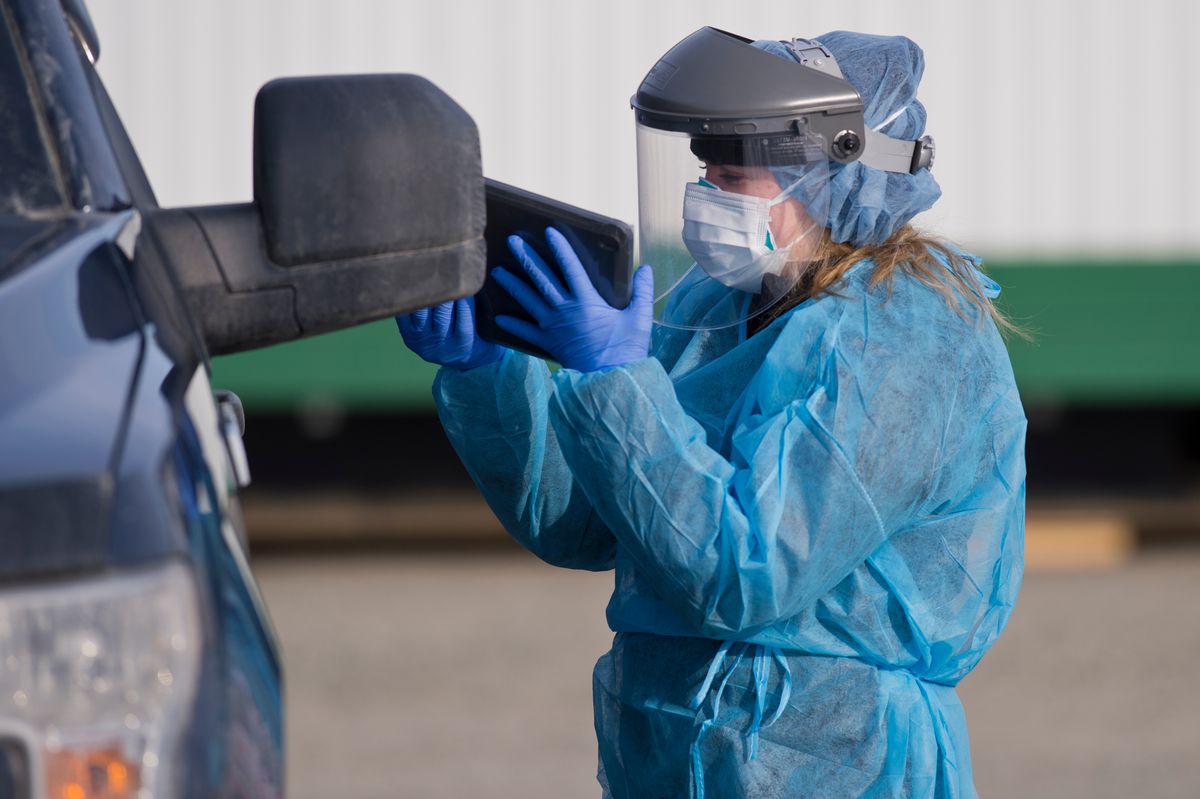 A staffer at Capstone Clinic screens a patient for respiratory illness in the facility's Wasilla parking lot. The clinic tested three of the four Mat-Su residents confirmed positive for COVID-19. (Marc Lester / ADN)

A staffer at Capstone Clinic screens a patient for respiratory illness in the facility's Wasilla parking lot. The clinic tested three of the four Mat-Su residents confirmed positive for COVID-19. (Marc Lester / ADN)

PALMER — As the days pass and the number of COVID-19 cases in Alaska grows, the Mat-Su is holding steady with just a few confirmed positives.

One in seven Alaskans live in the state’s fastest-growing region, the Matanuska-Susitna Borough north of Anchorage, many of them clustered in a densely populated area within a short drive of Palmer or Wasilla.

As of Saturday, however, Mat-Su residents made up only four of the 171 Alaskans who tested positive for the disease caused by the novel coronavirus.

Medical providers here say that doesn’t mean the virus isn’t already taking hold in a borough that covers as much ground as West Virginia or Ireland and holds nearly 110,000 people, more than any other municipality besides Anchorage. By contrast, Anchorage had 81 reported cases as of Saturday.

Some say there aren’t enough kits to test everyone with possible COVID-19 symptoms. Others say they know of residents who almost definitely have the virus but never got tested.

So the seemingly good news for Mat-Su — at least for now, at least on paper — only means it’s time to double down on mandates like staying home and social distancing, doctors say.

“That’s the real risk," said Dr. Wade Erickson, medical director at Capstone Clinic in Wasilla, one of several coronavirus testing sites. “As soon as you start opening it up, it’s going to skyrocket. If we can hold steady, we’re going to buy some time.”

‘This really could be COVID-19’

Statewide, there have been a total of more than 6,000 tests sent to public health and commercial labs, according to the Department of Health and Social Services.

As of Friday, there had been 319 tests administered by three of the four testing facilities in Mat-Su.

Some providers say they’re pretty sure they’re overlooking COVID-positive patients because of equipment shortages they hope are temporary.

An urgent-care clinic at Wasilla’s western end had tested just five people as of Friday after opening a drive-up screening service on March 23.

Urgent Care at Lake Lucille had only 11 test kits available and limited tests to people with fevers and respiratory symptoms who meet other Centers for Disease Control and Prevention protocols such as recent travel or a job as a health care worker, said Christa Williams, clinical supervisor and lead medical assistant.

People who didn’t meet the criteria got sent home with instructions to quarantine, call back if symptoms worsened, and dial 911 if they experienced respiratory distress.

By Monday, Williams said, she hoped to get another 50 test kits from the Mat-Su Borough’s emergency operations center.

“Once we have more tests, people who we’re like ‘Man, this really could be COVID-19’ and sending them home to self-quarantine, we will test them,” she said.

More people are getting tested at other facilities in the borough.

Staffers at Capstone Clinic’s drive-thru screening facility in Wasilla have received about 1,000 calls from people reporting COVID-19 symptoms, according to Erickson. About 250 came in for screening and 186 got tested.

Three of the four positive COVID-19 cases in Mat-Su were people tested at Capstone, he said. One patient lives on the Kenai Peninsula and two in Wasilla.

But even the Wasilla residents didn’t pick up the virus in the borough, Erickson said. One apparently acquired it on the Kenai, and the other at an Anchorage hospital.

It’s possible that for various reasons the Mat-Su is a pocket of the state with a low “viral load” right now, he said.

The only hospital in the borough, Mat-Su Regional Medical Center, has performed 128 tests — 115 negative and 13 pending, a spokesman there said. The number of people tested at the hospital’s urgent-care clinic in Wasilla was not available.

The hospital is tracking additional patients “who have some symptoms, but have not been tested,” spokesman Alan Craft said in an email.

Reports are surfacing in Mat-Su and elsewhere from patients concerned about false-negative test results. Federal guidance advises doctors that a negative result “does not exclude the possibility of COVID-19.”

Health experts estimate the false negative rate between 15% and 25% but could be as as high as 30%.

It’s entirely possible there are more COVID-positive people in Mat-Su regardless of the state case count, medical providers say.

A physician in the Susitna Valley says he knows a couple of people who either traveled or spent time around patients who did test positive. Those people are likely positive for the virus now but haven’t been tested.

“They developed symptoms so they just isolated themselves,” said Dr. George Hightower, medical director at the Sunshine Community Health Center near Talkeetna. “For 90% plus of the patients out there, that’s all that’s going to be required.”

Some people with lower levels of viral shedding might have the disease but not test positive for a week, Hightower said.

Test or no test, the recommendations for a COVID-positive patient are the same unless respiratory symptoms get bad, in which case it’s time for the ER, he said: Stay home, isolate and hydrate.

The apparently low number of cases in Mat-Su popped up in conversation among the state’s health officials this past week, said Dr. Anne Zink, the state’s chief medical officer and a former emergency department medical director at Mat-Su Regional Medical Center who is still working the occasional emergency shift at the hospital.

The state is going to see “these kind of pockets come up and down” but testing is necessary to make sure, Zink said during a media briefing earlier this week.

“Again, in Alaska, we do a good job of social distancing in general and maybe everyone in Mat-Su is out in their cabin and social distancing, it’s a little hard to know,” she said. “But part of our job is to trust but verify, and so in watching these numbers we have been going back around to different communities making sure they’ve got the supplies, they have what they need, that they’re testing, that they’re screening, to make sure we’re trusting but verifying that people are getting tested.”