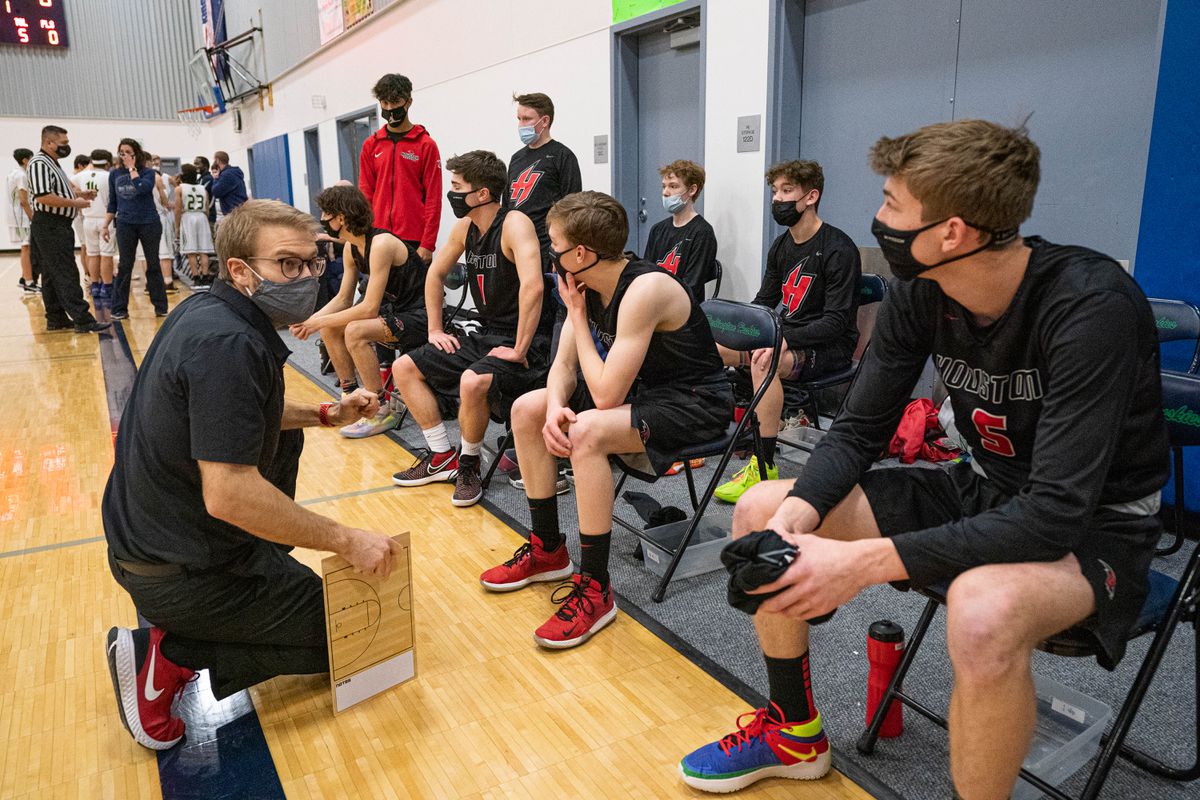 Houston High School JV basketball coach Jacob Byrley talks with his team before a game against the Redington High Huskies on Thursday, Feb. 11, 2021 at Redington High in Wasilla. The Matanuska-Susitna Borough School District began requiring masks for indoor activities this week after a number of schools shifted to remote learning due to COVID-19 outbreaks largely associated with unmasked sports and after-school functions. (Loren Holmes / ADN)

Houston High School JV basketball coach Jacob Byrley talks with his team before a game against the Redington High Huskies on Thursday, Feb. 11, 2021 at Redington High in Wasilla. The Matanuska-Susitna Borough School District began requiring masks for indoor activities this week after a number of schools shifted to remote learning due to COVID-19 outbreaks largely associated with unmasked sports and after-school functions. (Loren Holmes / ADN)

The Redington Huskies took on the Houston Hawks on Thursday afternoon in a junior varsity basketball game featuring a new strategy that had nothing to do with passing or man-to-man defense.

Everybody wore face masks under a new policy meant to stem a series of significant coronavirus outbreaks at a half-dozen Mat-Su schools.

The game was one of just a few high school basketball contests this week. That’s because the three large high schools in the most populated parts of the Matanuska-Susitna Borough — Colony, Palmer, Wasilla — are among five facilities closed at least through Friday due to COVID-19 clusters.

Some cases started with students mixing at school lunches, public health officials say. But what’s really driving this outbreak is activities: Many are linked to people playing sports or participating in after-school events like Battle of the Books without face coverings.

The district this week allowed activities to resume after a brief stop but with a 100% mask-wearing requirement indoors. Previously, athletes could remove masks during vigorous activity.

The basketball teams, coaches and spectators at Joe Redington Sr. Junior/Senior High School were complying Thursday. The wrestlers next door, less so, but administrators say they’re working on that.

Athletes say the masks take getting used to, but they’d rather wear them than not play, said Claudia Blydenburgh, assistant principal and activities director at Redington. Named for the Iditarod co-founder with local roots, the newer school with 551 enrolled students — 405 of them in person — serves families across a once rural but now developing area 10 miles outside Wasilla.

“Coaches, athletes and families, overwhelmingly that’s the take that they have on it — that they would much rather see activities going with masks than everything being canceled,” Blydenburgh said.

Mat-Su school board members have made it clear they don’t want to shut down activities. Some also express skepticism about masking. During a board meeting last month, one board member asked superintendent Randy Trani if they could take off their masks because they were socially distant, seated 6 feet apart.

“In school we try to have students and staff wear the masks at all times,” he said. “I know that you guys aren’t going to go back and forth right now but I just think it’s the better example if we do it that way.”

The Mat-Su Borough School District described itself as one of the largest districts on the West Coast to open for in-school learning when the year began. Other districts watched the results as they made their own decisions about in-person classes.

As of Friday, the Anchorage School District had five elementary school classrooms that temporarily shifted to remote learning due to COVID-19 cases. The district was reporting 42 active cases and 723 total since September. The Fairbanks North Star Borough School District had no closures due to COVID-19. That district was reporting 17 active cases and 232 since the start of the year, 137 of them in staff and 95 in students.

Neither is experiencing the scale of disruption happening in Mat-Su.

By early February, the district saw five schools shift to remote learning as case numbers rose. As of Thursday, officials reported 176 infections over the past two weeks, including roughly 25 each at Colony middle and high, big schools in the suburban core between Palmer and Wasilla, and 34 at Pioneer Peak Elementary in the same area.

Public health officials can’t say exactly how many people are considered close contacts of the current cases. The number reflects an often hidden level of disruption in local schools: Close contacts are asked to quarantine after coming within 6 feet of an infected person for at least 10 to 15 minutes.

Mat-Su public health nurse Rene Dillow this week estimated that an average of 10 people per case provides a “reasonable” number.

In Mat-Su, that would mean roughly 1,760 staff and students would be considered close contacts of people infected over that period.

Keep in mind, some cases might have no contacts where others have dozens, Dillow said.

“It’s a range,” she said. “Usually teachers don’t have close contacts when they’re positive because they’re being really careful with mitigation.”

It’s also possible there are more cases within the district than that number indicates. Mat-Su reports only cases in which staff or students were considered infectious while in school, according to Dillow and district spokeswoman Jillian Morrissey.

Both say that’s a commonsense way to let families know the level of risk. A student who tests positive for the virus while remote learning at home doesn’t pose a threat to anyone at school.

“There’s no hiding of any case,” Morrissey said Thursday. “What we’re trying to do is provide transparency on that page.”

A few district employees who asked not to be identified say that without better explanation, the Mat-Su reporting method can generate distrust among staff already at risk because they’re going into buildings daily. They say low case reports on the district website don’t always square with empty classrooms and staff out sick. Teachers say they also hear about families refusing to get students with symptoms tested, keeping them home instead.

The Anchorage School District, the state’s largest, uses a different reporting strategy. Officials say they encourage families to report COVID-19 cases whether or not the students are actually in school buildings when they are in the infectious phase, including distance learners.

“We want to know every case if possible,” said ASD spokeswoman Lisa Miller. “We want to get a good picture of everyone.”