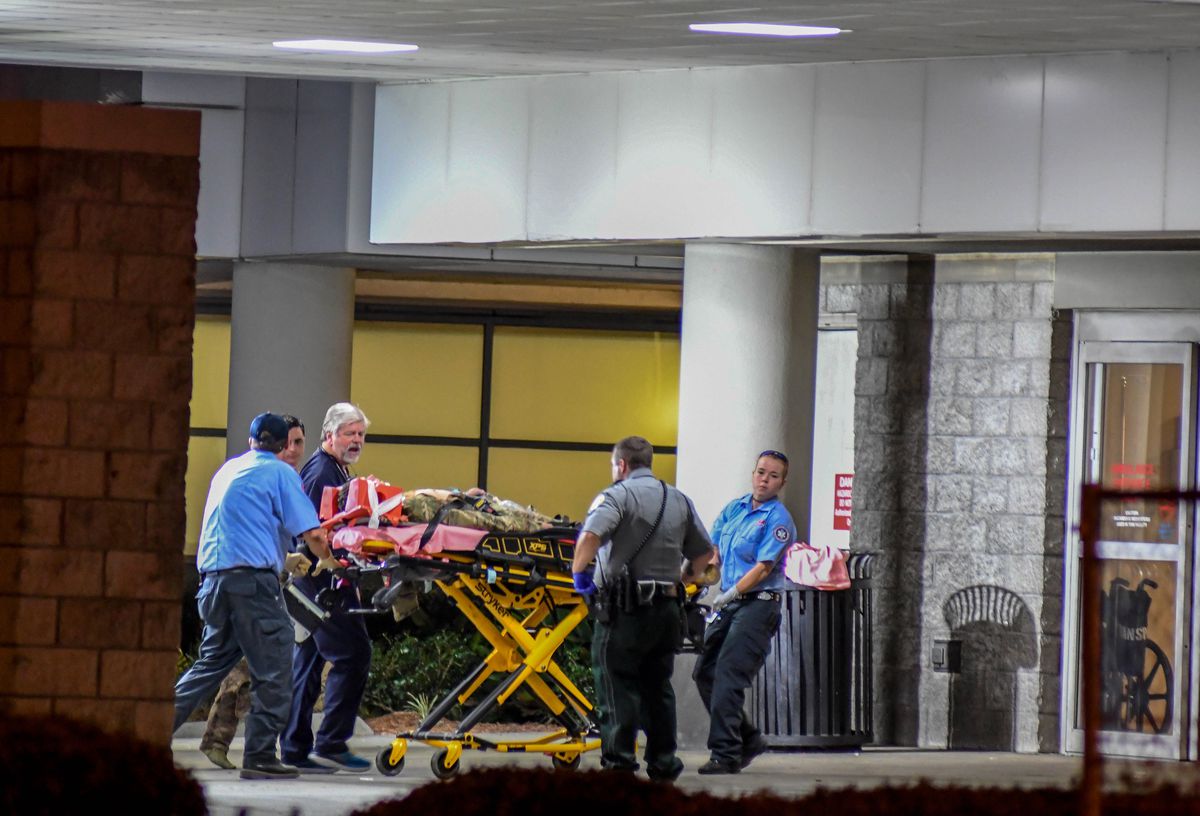 More than 30 Alaska-based U.S. Army paratroopers were injured, many of them badly enough to require hospital care, during a night jump Wednesday at a Mississippi training.

It was 12 hours before rescuers extricated the last of 87 paratroopers who ended up in a stand of pine trees during the jump.

None of the injuries were life-threatening, officials said.

The soldiers brought to the hospital were all conscious, doctors there said. Their wounds included broken vertebrae including some “significant fractures” but not major head or spinal cord injuries. One paratrooper needed surgery for a broken back, according to the unit’s commander.

The slow process of pulling paratroopers from the trees in a remote part of the camp meant patients trickled into a local hospital overnight and into Thursday morning.

The paratroopers were all from the 4th Brigade Combat Team (Airborne), 25th Infantry Division, at Joint Base Elmendorf-Richardson. They were among about 3,000 JBER-based soldiers participating in an exercise at Camp Shelby south of Hattiesburg.

Four of them remained hospitalized at Forrest General, Ginn said. The rest are either back with their units or at a medical clinic.

The paratroopers jumped out of three C-130s, Bain-Sangster said. They were supposed to drop onto an airfield but instead landed in trees around it.

Army officials declined to provide any details about what may have caused the errant jump.

An investigation into what caused the injuries is underway. All training was halted after the jump, though commanders say they expect it to resume by Friday. The command team planned to hold a town hall meeting for paratrooper families on base Thursday evening.

The airborne operation was part of an exercise known as Arctic Anvil that involved around 650 paratroopers in multiple aircraft and two drop zones, Ginn said.

Participants realized after a “fairly short time” that jumpers coming out of C-130s were drifting off course, said Col. Christopher Landers, commander of the Spartan brigade. There were spotters on the ground with night-vision goggles communicating with the airborne crews.

Officers called for help from emergency responders to assist EMS personnel already at the site in case of injury. The paratroopers ended up 200 to 400 yards from the “intended point of impact,” Landers said, intentionally avoiding the words “off course.”

Planners had already made preparations for possible injuries during the exercise. Along with having medics at the site, Army officers met with local hospital officials several weeks ago to prepare them for a possible influx of patients from the training.

Injuries on jumps are fairly common but not to this extent, Landers said.

“To have this number is relatively rare,” he told reporters at a press conference at the camp. “In my career, I’ve seen a half-dozen times where this many jumpers end up in the trees.”

The hospital went into mass casualty mode after they were told to expect as many as 84 injured soldiers, officials there said.

A Mississippi National Guard statement said, “Forrest General Hospital was notified prior to the jump of the potential influx of patients and the types of injuries to be expected and emergency vehicles were on standby at Camp Shelby prior to the jump.”

Forward officers met with hospital officials several weeks ago to let them know more patients could be coming in than usual during the training because of the “significant number” of soldiers involved, Nelson said.

The hospital got another notification about four hours before the incident that the unit was “doing a somewhat risky procedure and they may bring us more patients than usual,” he said. “We were prepared and ready to go.”

The hospital had more than 200 staffers on duty Wednesday night including trauma, spine and neurosurgeons, as well as extra radiologists, anesthesiologists and a plastic surgeon.

The commander of the Alaska regiment nicknamed “Geronimo” praised the community around Camp Shelby as going “above and beyond” to care for the paratroopers in a message to families Thursday morning.

“As I have said before, service as a paratrooper requires a level of toughness that most do not understand,” Myer wrote. “Despite the difficulty of this training jump, the battalion performed well and will recover well to continue our training mission.”

The incident occurred at the start of a 10-day exercise intended to prepare the unit for an upcoming training at Fort Polk, Louisiana, officials said. The exercise pits Alaska soldiers against Mississippi National Guard members acting as enemy forces.