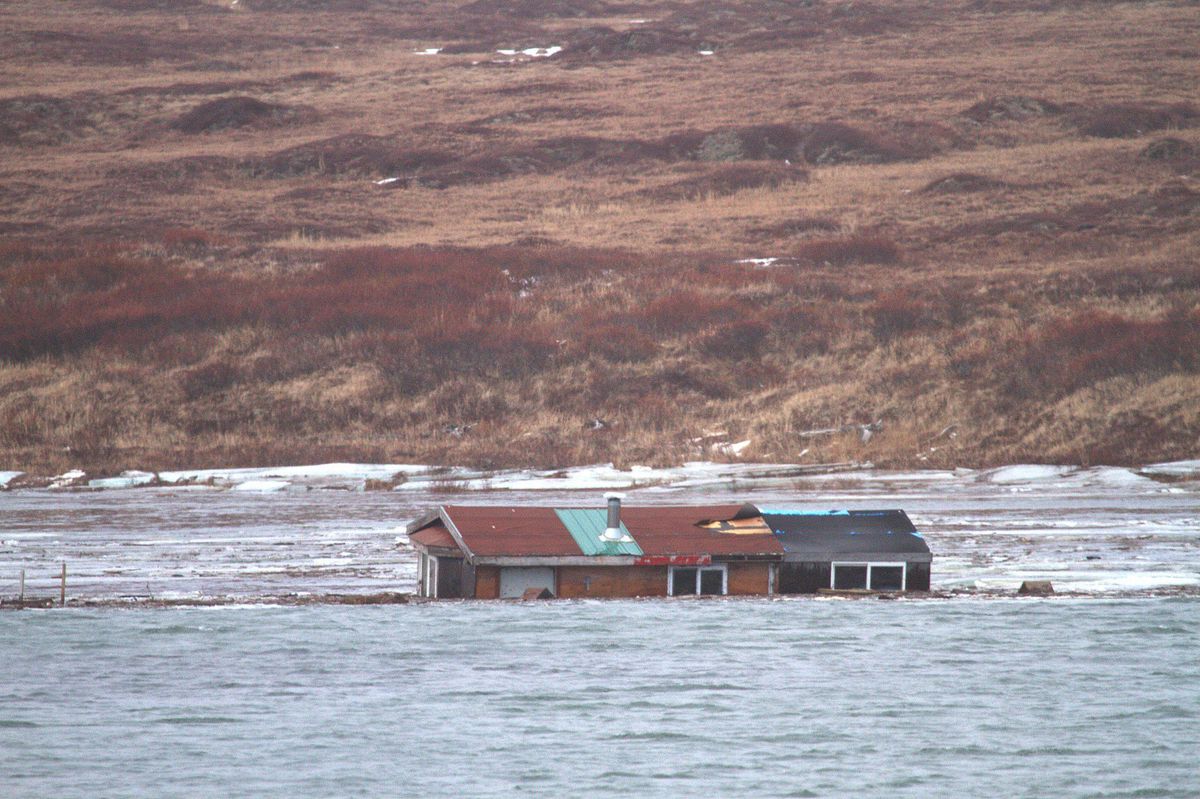 After a late-fall Bering Sea storm, one Nome cabin ended up in the Nome River and was covered by rising water. (Photo from Jim Dory via KNOM)

After a late-fall Bering Sea storm, one Nome cabin ended up in the Nome River and was covered by rising water. (Photo from Jim Dory via KNOM)

A strong Bering Sea storm late last week brought winds up to 50 mph, blowing snow and high water to the Bering Strait region. Some communities saw significant erosion while others were mostly unscathed.

In Nome, summer cabins in the Safety Sound area were threatened by storm surge, while one cabin ended up in the Nome River due to high water. For comparison, during the November storm of 2011 in Nome, sea ice in the Snake River and Port of Nome area was completed devastated, but was still present enough to prevent further flooding.

Some high water at Safety Sound after our storm last night.

Across the strait, Gambell on St. Lawrence Island experienced severe erosion on its west beach.

“Five extra feet or so, 5 to 10 extra feet got eaten away by the drumming of the waves and people were finding a bunch of walrus teeth, beached walrus tusks, and a whole bunch of them (tusks and ivory) surfaced that were buried underground as well,” said Gambell City Clerk Charlotte Apatiki.

Apatiki says normally the community sees these types of storms before November. Ricky Takak of Shaktoolik, one of the local storm watchers, agrees. With the sea ice forming later than it has historically, Takak is concerned the newly repaired berm in Shaktoolik could be washed out by the next significant storm. Shaktoolik saw water levels and waves 4 to 8 feet above normal last weekend, according to Takak.

In Kotlik, Victor Tonuchuk Jr. said there wasn’t much damage from the storm, no erosion that he noticed, and minor flooding due to high wind. But Tonuchuk noted that there is no sea ice in the Yukon River near Kotlik either.

Without a presence of historic sea ice across the region at this point in the season, Apatiki says, these storms can be even more damaging, as shown by an earlier fall gale.

“You know like a month or so back, all of our water tank roofing from one of the storage tanks blew off. So I’m surprised no roofing or anything was blown off during this last storm," Apatiki said.

In Wales, one resident observed over the weekend, the storm surge "has gone down some but any rise in wind speed it just swells back up. The sand dunes are being swept away. These have protected us for generations. While this continues the sea ice will be delayed longer into the season due to this storm activity. The sea ice protected our shores against this. Now we have none.”

Time to bust out the serf board.

Dennis Davis of Shishmaref shared photos on social media showing significant erosion of the road to the dump. In Elim, residents posted pictures of Moses Point filled with debris and driftwood to the level where hardly any sand was visible.

KNOM’s Sophia DeSalvo and Emily Hofstaedter contributed to this report.