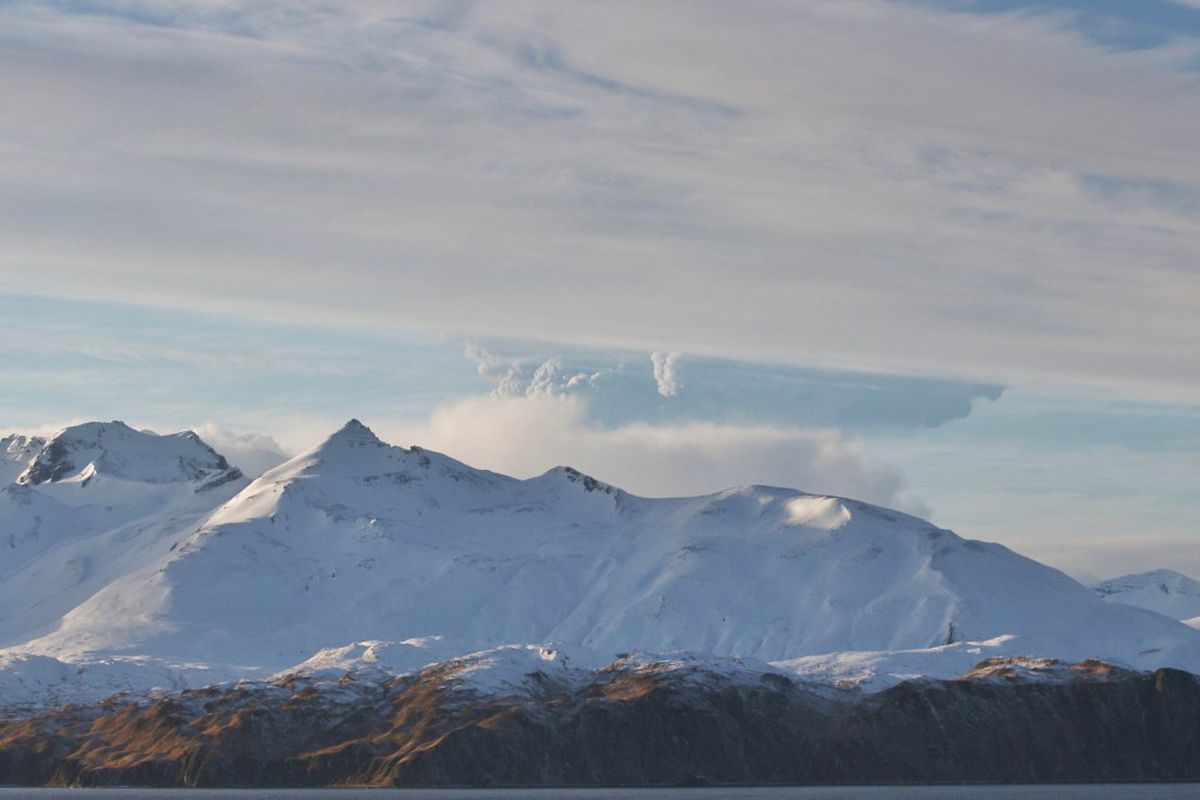 A plume rises from Bogoslof volcano, partially obscured by a mountain on Unalaska Island, in this view from Unalaska, about 60 miles east of the volcano, on Wednesday, Dec. 22, 2016. (Lynda Lybeck-Robinson / ADN reader submission)

A plume rises from Bogoslof volcano, partially obscured by a mountain on Unalaska Island, in this view from Unalaska, about 60 miles east of the volcano, on Wednesday, Dec. 22, 2016. (Lynda Lybeck-Robinson / ADN reader submission)

A volcano in the Aleutian Islands was showing "continuous" seismic activity Thursday after two eruptions that dramatically reshaped a small island closest to its vent.

The Alaska Volcano Observatory has been watching Bogoslof volcano closely since Tuesday, when pilots saw a brief eruption that prompted AVO to issue warnings of an imminent or continuing eruption.

But AVO reduced ratings for Bogoslof, about 60 miles west of Unalaska, to an aviation code of orange and an alert level of "watch" following the second eruption at about 4:10 p.m. Wednesday. A 35,000-foot ash plume from that eruption drifted northward, the observatory said.

Those alert levels remained in effect throughout Thursday, despite the observatory reporting "strong continuous seismic activity" beginning around 1:40 a.m., based on data from monitoring stations on nearby islands.

AVO staff assessed satellite data and determined an approximate location of the volcano's vent, which was underwater near Bogoslof Island's eastern shoreline, or where the shoreline used to be. The island has been shaped by previous blasts, and the most recent eruption is no exception.

Ash-fall has accumulated above sea level and created new land while a portion of the island near the vent was blown out during one of the eruptions, said Dave Schneider, a volcanologist at AVO.

"This (event) has been mostly ash fallout, which is cinders or granular material that's not welded together. It's loose material," Schneider said. "What may happen next is lava makes it up to the surface, hot and fluid, and it flows a short distance before cooling and solidifying."

If lava surfaces it will likely be around the location of the vent, he said. The island already features dome-shaped landmarks formed by lava during previous eruptions, the most recent having been in July 1992.

Seismic activity at the volcano tapered off Thursday evening, but Schneider said it remained restless.

"The volcano remains less restless and seismicity associated with ongoing activity continues. The strength of the activity waxes and wanes, and that's typical for all volcanoes. Ever. For all time."

The observatory released a satellite-based map showing a plume of sulfur dioxide, a gas released during volcanic activity, being carried north from Bogoslof just after 11 p.m. Wednesday.

Schneider said the observatory was using a variety of sensors deployed by space agencies over the Pacific Ocean to monitor events at Bogoslof.

"SO2 is probably the most easily detectable volcanic gas," Schneider said. "With the satellite resolutions we usually see, we don't normally see usual volcano degassing; it's more consistent with an explosion."

The sulfur dioxide was proving easier to track than ash from Wednesday's eruption. Despite unofficial models on the AVO website showing ash drifting to the northeast, Schneider said they were computer projections, not forecasts. He said it was possible that a sulfur cloud might pass over Anchorage, but ash-fall that far northeast of the volcano was unlikely.

"In many cases, a volcanic cloud can pass over an area without dumping ash on the area or (producing) much ash fallout," Schneider said.

Terri Tibbe, the operations manager at Ted Stevens Anchorage International Airport, said her staff had received "no warnings or alerts" regarding airborne ash from Bogoslof.

Michael Kutz, a meteorologist at the weather service's Anchorage office, said the pilots of two jets reported encountering the sulfur plume east of Bethel early Thursday. The first jet was at an altitude of 37,000 feet about 60 miles northeast of Bethel at 7:06 a.m., and the second was at 32,000 feet about 100 miles east at 7:52 a.m.

"All they reported was a strong sulfur smell but negative ash," Kutz said.

No ground-based reports of falling ash had reached the weather agency following the sulfur emission, according to Kutz.

"It's just been that one great big burp and then it's really been smell," Kutz said.

On Thursday morning, Grant Aviation pilot Chad Smith said from the Unalaska airport he flew near Bogoslof about half an hour after its Tuesday eruption, but the ash had already dissipated and he saw only a 500-foot steam plume.

Neither eruption has sent ash toward Unalaska, he said.

"Because of the wind and its direction, it's been blowing out to sea, out into the Bering," Smith said. "It hasn't affected us at all so far, so we've been lucky."

Smith didn't anticipate any effects on Grant Aviation flights Thursday due to the volcano.

"We're just at a heightened state of alert," Smith said. "Due to the constant state of eruptions, we're just keeping an eye on it."

Kutz said that the single ash plume from Wednesday's eruption had headed north.

"It went out over the top of the Aleutian chain out into the (Bering Sea), and it's out of our (monitoring) area," Kutz said.