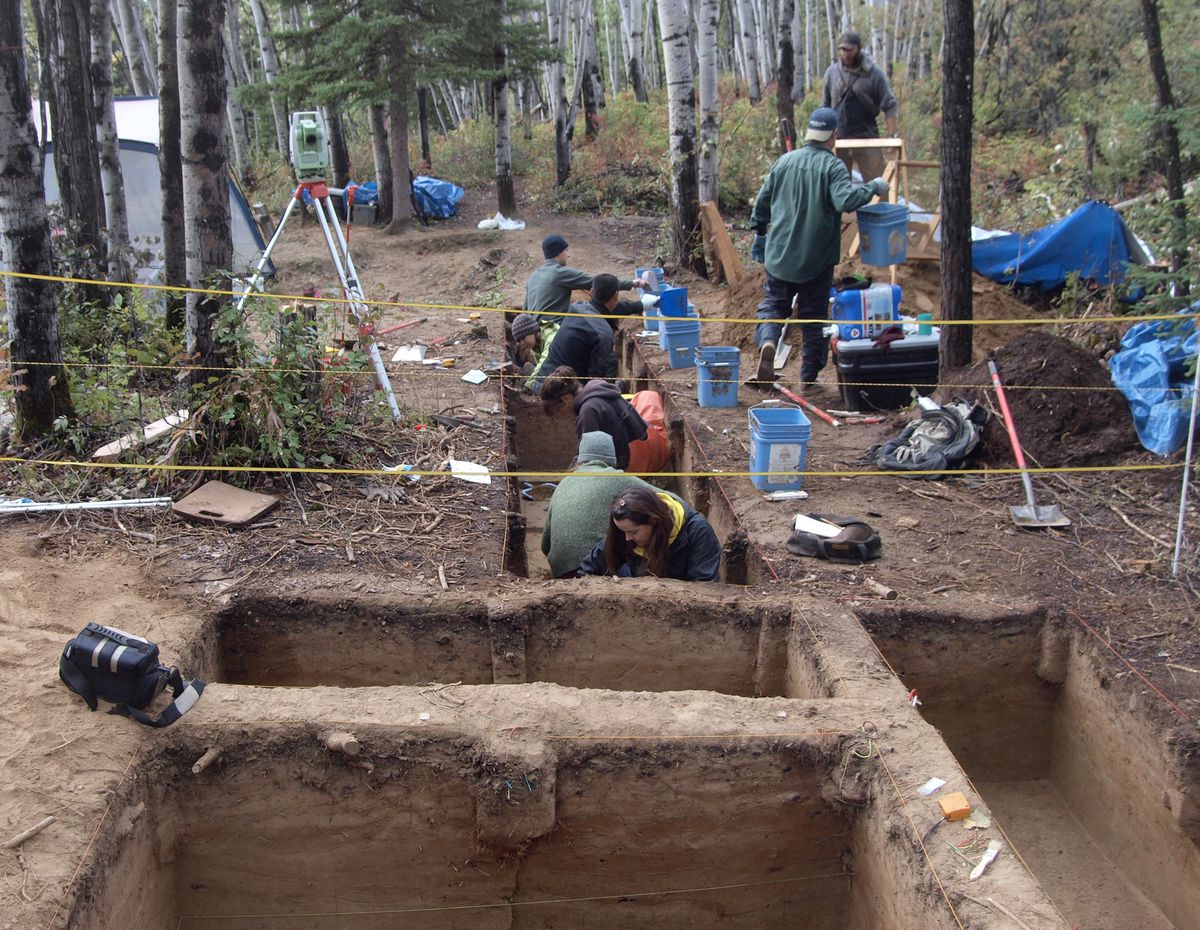 FILE — Members of an excavation team work in a trench at the Upward Sun River archaeological site in the Tanana River Valley. (Ben Potter / UAF)

FILE — Members of an excavation team work in a trench at the Upward Sun River archaeological site in the Tanana River Valley. (Ben Potter / UAF)

The girl was just six weeks old when she died. Her body was buried on a bed of antler points and red ocher, and she lay undisturbed for 11,500 years.

Archaeologists discovered her in an ancient burial pit in Alaska in 2013, and on Wednesday an international team of scientists reported they had retrieved the child's genome from her remains. The second-oldest human genome ever found in North America, it sheds new light on how people — among them the ancestors of living Native Americans — first arrived in the Western Hemisphere.

The analysis, published in the journal Nature, shows that the child belonged to a hitherto unknown human lineage, a group that split off from other Native Americans just after — or perhaps just before — they arrived in North America.

"It's the earliest branch in the Americas that we know of so far," said Eske Willerslev of the University of Copenhagen, a co-author of the new study. As far as he and other scientists can tell, these early settlers endured for thousands of years before disappearing.

The study strongly supports the idea that the Americas were settled by migrants from Siberia, and experts hailed the genetic evidence as a milestone. "There has never been any ancient Native American DNA like it before," said David Reich, a geneticist at Harvard Medical School who was not involved in the study.

The girl's remains were unearthed at the Upward Sun River archaeological site in the Tanana River Valley in central Alaska. Ben A. Potter, an archaeologist at the University of Alaska, discovered the site in 2006 during testing for a possible rail line between Fairbanks and Delta Junction.

The site was apparently home to short-lived settlements that appeared and disappeared over thousands of years. Every now and then, people arrived to build tent-like structures, fish for salmon, and hunt for hare and other small game.

In 2010, Potter and his colleagues discovered human bones at Upward Sun River. Atop a hearth dating back 11,500 years were the cremated bones of a 3-year-old child. Digging into the hearth itself, archaeologists discovered the remains of two infants.

The Healy Lake Village Council and the Tanana Chiefs Conference agreed to let scientists search the remains for genetic material. Eventually, they discovered mitochondrial DNA, which is passed only from mother to child, suggesting each had different mothers. Moreover, each infant had a type of mitochondrial DNA found also in living Native Americans.

That finding prompted Potter and his colleagues begin a more ambitious search. They began collaborating with Willerslev, whose team of geneticists has built an impressive record of recovering DNA from ancient Native American bones.

Among them are the 12,700-year-old Anzick Child, the oldest genome ever found in the Americas, and the Kennewick Man, a 8,500-year-old skeleton discovered in a river bank in Washington state. Questions over his lineage provoked a decadelong legal dispute between scientists, Native American tribes and the Army Corps of Engineers.

Living Native Americans descend from two major ancestral groups. The northern branch includes a number of communities in Canada, such as the Athabascans, along with some tribes in the United States like the Navajo and Apache.

The southern branch includes the other tribes in the United States, as well as all indigenous people in Central America and South America. Both the Anzick Child and Kennewick Man belonged to the southern branch, Willerslev and his colleagues have found.

So he was eager to see how the people of Upward Sun River might be related. But the remains found there represented a huge scientific challenge.

The search for DNA in the cremated bones ended in failure, and Willerslev and his colleagues managed to retrieve only fragments from the remains of Yelkaanenh T'eede Gaay, the youngest of the infants.

But the researchers had better luck with Xach'itee'aanenh T'eede Gaay. Eventually, they managed to put together an accurate reconstruction of her entire genome. To analyze it, Willerslev and Potter collaborated with a number of geneticists and anthropologists.

Xach'itee'aanenh T'eede Gaay, they discovered, was more closely related to living Native Americans than to any other living people or to DNA extracted from other extinct lineages. But she belonged to neither the northern or southern branch of Native Americans.

Instead, Xach'itee'aanenh T'eede Gaay was part of a previously unknown population that diverged genetically from the ancestors of Native Americans about 20,000 years ago, Willerslev and his colleagues concluded. They now call these people Ancient Beringians.

Beringia refers to Alaska and the eastern tip of Siberia, and to the land bridge that joined them during the last ice age. Appearing and disappearing over the eons, it has long been suspected as the route that humans took from Asia to the Western Hemisphere.

There has been little archaeological evidence, however, perhaps because early coastal settlements were submerged by rising seas. Thanks to her unique position in the Native American family tree, Xach'itee'aanenh T'eede Gaay has given scientists a clear idea how this enormous step in human history may have happened.

Her ancestors — and those of all Native Americans — started out in Asia and share a distant ancestry with Chinese people. In the new study, the scientists estimate those two lineages split about 36,000 years ago.

The population that would give rise to Native Americans originated somewhere in northeast Siberia, Willerslev believes. Archaeological evidence suggests they may have hunted for woolly rhino and other big game that ranged over the grasslands.

"It wasn't such a bad place as we kind of imagine it or as we see it today," he said. In fact, Siberia appears to have attracted a lot of genetically distinct peoples, and they interbred widely until about 25,000 years ago, the researchers determined.

About a third of living Native American DNA can be traced to a vanished people known as the ancient north Eurasians, known only from a genome recovered from the 24,000-year-old skeleton of a boy.

But the flow of genes from other Asian populations dried up about 25,000 years ago, and the ancestors of Native Americans became genetically isolated. About 20,000 years ago, the new analysis finds, these people began dividing into genetically distinct groups.

First to split off were the Ancient Beringians, the people from whom Xach'itee'aanenh T'eede Gaay descended. About 4,000 years later, the scientists estimate, the northern and southern branches of the Native American tree split.

According to Ripan Malhi, an anthropologist at the University of Illinois and a co-author of the new study, these genetic results support a theory of human migration called the Beringian Standstill model.

Based on previous genetic studies, Malhi has argued that the ancestors of Native Americans did not rush across Beringia and disperse across the Americas. Instead, they lingered there for thousands of years, their genes acquiring increasingly distinctive variations.

But while the new study concludes early Native Americans were isolated for thousands of years, as Malhi had predicted, it doesn't pinpoint where.

"The genetics aren't giving us locations, with the exception of a few anchor points," Potter said.

Indeed, while the co-authors of the new study agree on the genetic findings, they disagree on the events that led to them.

"Most likely, people were in Alaska by 20,000 years ago, at least," Willerslev said. He speculated that the northern and southern branches split afterward, about 15,700 years ago as the ancestors of Native Americans expanded out of Alaska, settling on land exposed by retreating glaciers.

Potter, however, argues that the lineage that led to Native Americans started splitting into three main branches while still in Siberia, long before reaching Alaska.

Pointing to the lack of archaeological sites in Beringia from 20,000 years ago, he believes it was too difficult for people to move there from Asia at that time. "That split took place in Asia somewhere — somewhere not in America," Potter said.

If he is right, the mysterious earliest settlers of this hemisphere didn't arrive in a single migration. Instead, the Ancient Beringians and the ancestors of the tribes we know today took separate journeys. "Even if there was a single founding population, there were two migrations," he said.

But these scenarios all depend on timing estimated from changes in DNA, which "can be very sensitive to errors in the data," Reich cautioned. More tests are required to be confident that the Ancient Beringians actually split from other Native Americans 20,000 years ago, he said.

And while the new study reveals the existence of the Ancient Beringians, it doesn't tell scientists much about their ultimate fate.

But knives and other tools found at the Upward Sun River site belong to a tradition, called the Denali Complex, that endured until at least 7,000 years ago. The people made those tools elsewhere in central Alaska may have been Ancient Beringians.

If so, they survived for nearly 13,000 years after splitting from the ancestors of other Native Americans. "The archaeology fits with them lasting for quite long," Potter said.

The Native Americans who today live around the Upward Sun River site belong to the northern branch of the genetic family. The new study indicates that their ancestors returned north at some point to Alaska, perhaps replacing or absorbing the Ancient Beringians.

If the latter, and if geneticists are able to sequence more DNA from northern branch tribes, then they may stumble across living proof of an ancient North American people that no one knew existed.

"My answer to the question, 'What happened to the Ancient Beringians?' is: 'We don't know,'" Potter said. "And I like that answer."